Yesterday I made reference to the yo-yo effect of the market on Friday and Monday… Well that continued today with the move back towards the highs as the S&P 500 index gained 1% and the NASDAQ was up 1.3% and both closing back above the resistance points broken on Friday. What gives? The headlines are giving credit to Dell and the $24.4 billion buyout. It is believed that there will be more deals to come as money is looking for better returns on investment.

What does that have to do with the value of stocks overall? Good question. One that we would have to speculate to answer, but the consensus is more buyouts are good for stocks and show that valuations are too low for companies. Thus, rally resumes to the upside as the volatility picks up on a daily basis.

What other data was helpful on the day?

ISM Services report fell to 55.2% from the 55.7% in December. The estimates were for 55%, thus it beat the outlook. Combined with the manufacturing number on Friday it shows some promise in the economy holding steady on the upside. Still not showing great growth, but steady.

Earnings remain on the positive side and lead the upside for stocks.

Bonds continue to fall as interest rise with the rate on the 30 year to 3.2% and the ten year to 2%. The downside in the bonds continue to be a concern for fixed income investors.

Technology continues to struggle to break higher and remains in a trading range.

Focus, set your stops and manage your risk.

The index moved back above the 1500 level to 1511 on the close. The uptrend remains in play, but the up and down volatility has my attention relative to near term direction. We have to step back and re-evaluate the volatility range on the index and within the sectors of the S&P 500 index.

The  leadership shifted in the sectors of the S&P 500  index. Energy (XLE) remains the leader, but moving sideways over the last week.Consumer Services (XLY), Industrials (XLI), Financials (XLF), Basic Materials (XLB), Utilities (XLU) and Healthcare (XLV) are shifting to sideways movement currently.  Technology (XLK) is struggling period on mixed earnings data. Telecom (IYZ) has attempted to break higher, but remains in a sideways trend. The bottom line for the broad market is the short term  trend is being challenged and we have to be patient to see how it unfolds.

The chart below has a starting point of 11/15 which was the pivot point for the current uptrend. The testing of the upside is in play as the markets find a way to move sideways. The upside outlook is for a move towards the target of 1550-1575 short term. 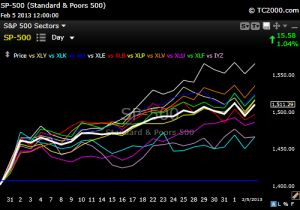 The chart below is the 28th of December starting point. The leadership is similar to the chart above but, you can see the acceleration of the Energy and Healthcare sector clearly over the last week plus. The last week you can see the uncertainty building along with renewed volatility. Sit tight for now and let’s see how the week progresses. 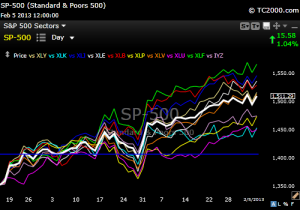 The VIX index jump around much like the index itself. Thus, the short term uncertainty seems to be in play again. Still worth watching as this unfolds.

NASDAQ Index – The NASDAQ fell back above resistance as the volatility picks up again. Watch and see how it plays out short term.

Dow Jones 30 Index – Remained below the 14,000 mark after making another attempt to break through. Failed to confirm a move higher and puts the index back on watch relative to the downside. Need some direction either way.

Small Caps – IWM cleared the $90 mark Friday only to retrace it’s steps and challenge support on Monday. Support is $87.50 and if you are unwilling to hold to that level you may not want to stay if the downside follows through. Moved back above the $90 mark on Tuesday.

Midcap Index – Tested lower losing 1% on the day. The index continues to hold up well in the face of opposition. Weigh out the risk factor at these levels currently and continuing to hold or exiting positions. A break higher is no guarantee at these levels and the downside risk has to be protected.

Financials – XLF moved above $17.50 resistance, retraced, and back above it again today. Banks (KBE) and regional banks (KRE) both made moves higher again to set the pace. Hold for now and watch the downside risk of the sector if the broad markets shift momentum.

US Dollar – The dollar remains in a downtrend, but got a bounce today on the worries about Europe (IEV). The buck retreated some, but holding near the $21.70 level today. Watch the bounce for evidence of a continued move higher.

Euro – The euro was testing lower on the rally in the dollar, but this is only one day and we will have to see if the trend reverses relative to the dollar.  Let this play out on the upside.

Japanese Yen – Has the yen found the near term low… yet? FXY moved to a new low at $104.78. I am not convinced the bottom is in yet for the yen. The devaluation is an attempt to stimulate exports for Japan. Short Yen (YCS) exit if the bounce finds reason.

Treasury Bonds – The yield on the 10 year jumped Friday to 2.01% and the 30 year to 3.21%. The downside risk in Treasury bonds is in play as the talk shifts to rising rates with the Fed stepping out of the way as unemployment data improves along with the housing market. TBT is in the model currently to take advantage of the move lower. Watch if the sentiment change on Monday continues.

High Yield Bonds – Big drop in the bonds this week and hit our stop at $93.75 (HYG). Hit the stop levels on Thursday and the next level of support is at $92.75. Manage your exit points if you have not already done so.

Corporate Bonds – LQD, iShares Investment Corporate Bond ETF was struggling to hold support near the $120.40 level. Broke support and the 200 day moving average. The downtrend started in October and has not settled yet at support. Short play on LQD hit entry and we have continued to push lower to close at $118.74 on Friday. Downside pressure is building on fixed income.

The commodity sector continues to be a challenge relative to direction short term. There are sub-sectors attempting to make moves to the upside, but you have to manage your risk. This remains a traders sector for now.

UNG – Consolidating near the $18.25 level. Inventory data helped to hold support for now at $18.25 on UNG. The bottom line for natural gas is volatility based on news and speculation. Not willing to own or trade currently. Watch for a move through the $19.25 area currently.

OIL – Crude back above the $22.90 level, but keeps the move higher in question. The close at $96.63 up slightly on the day. Watch the downside risk relative to an emotional reaction from investors and the speculation on demand… I like the current follow through on the upside, but the risk is still in play short term. Manage your stop. Watch as the inventory data as it showed more build up in supply.

GLD – Still in a consolidation wedge and downtrend off the October high. Watch and play accordingly.

DBB – Base Metals broke support, tested $18.60 low and now is attempting to move to the upside. Wednesday it did finally break higher from the consolidation with a gap higher of nearly 2%. The driver was copper and Nickle gaining upside momentum. Held and followed through on the week. Watch for the continuation of the play higher.

Platinum (PPLT) remain the better bet on the precious metal side. Platinum is testing the consolidation pattern on the upside. Need to break above $167.

The NASDAQ Global Market Index (NQGM) broke above 970 on the index and has moved to 1025. The global markets remains a positive among investors short term. Money flow into the country ETFs has improved along with the upside gain.

WATCH: EFA – Dropped 1.8% on Monday. The uptrend short term continues, but we have to see how this plays out going forward with modest move on Tuesday. Stick with the uptrend play for now as it holds support. $58.25 support was tested.

WATCH: IEV – Dropped 2.7% Monday as the selling was over concern in Spain. The modest bounce didn’t eliminate the concern that European rally may unravel some before this is over. One day at a time. Don’t assume anything and keep your focus going forward. The confidence that there is a back stop has brought investors back to the table. Looking at the daily chart for the last year we can see the break above resistance and the trend higher remains in play. Upside target is $45.50 going forward.

WATCH: FXI – China has established the uptrend off the November low. However, the volatility of the move has picked up on economic data from China and the move below $40.75 was a big negative. Watch as a consolidation pattern is building on the chart broke lower. A confirmation of the break of support at $40.85 is in play and bounced back to the upside short term.

WATCH: EEM – Emerging markets have been doing well. The chart shows a consolidation pattern that is still in play and may shift back to an upside bias if the news improves in the US. $43.50 is the support level, and upside breakout would be a move above $44.80.

WATCH: IYR – The break above $66.12 was the entry point of the move above resistance. Still moving higher short term. Watch for potential test of support in the move. Started Wednesday and bounced some on Friday. Be patient as this plays out short term.