Day 2 of the Cyprus catalyst is behind us and the disruption is still in play. I keep going back to the same question, why does this matter? The loan is 10 billion euro and we are trashing global market values in multiples of that number. Where is the logic in this trading? That’s the point… there isn’t any. The selling came in a big wave on Wednesday after the markets started the day higher. I suppose there was some hope of this going away as quietly as it was started. Not that easy I am afraid. Thus we outline below some of the good and some of the bad following the day. The one positive late in the day was the parliament rejected the proposed tax on deposits. But, there is still plenty of issues on the table before this is resolved. Scanning for rotation we continue to see developments on the upside along with some warnings.

Market starts higher and then sells lower… worse progression than Monday. Still need to determine the possible outcome relative to the fear factor being generated over Europe. Stay focused, be disciplined and follow your plan.

Housing Starts were better than expected at 917,000. Watch the housing sector with XHB and ITB.

Three days of struggles for the broad indexes, but the uptrend line is still in play and the outcome be determined moving forward. Cyprus remains in the headlines, but tomorrow the Fed will take center stage.

The February 25th low pivot point remains in play, but we are adding the March 14th high as the next potential pivot point on the downside this week. As you can see on the chart the move lower was unanimous until today. The rotation or shift has been to add some positive moves today. XLP, XLU, IYZ and XLV ended with green in the return column. None of them convincing enough to shift the tide back to the upside, but we continue to watch this unfold for now. Not enough on the downside to raise unjust concerns at this point, but we have to manage the risk should the selling gain any traction near term. Patience as there are not conclusions. 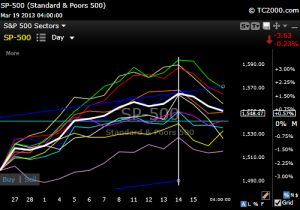 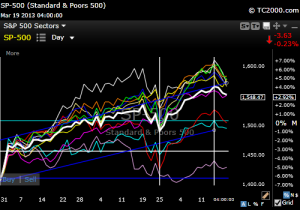 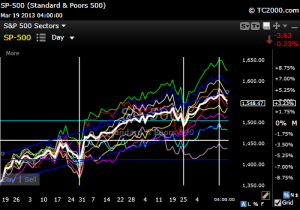 Telecom – On March 1st the sector established a  low and pivot point. It has continued to push higher over the last week making an attempt to head back towards the February highs. Added to the S&P 500 Watch List for entry. The volatility is back and the sector continues to move sideways. Scanning the ETFs the following are worth watching:

Technology – The sector finally made a move above the top side of the trading range. Oops, didn’t hold the move on the Cyprus volatility and testing range again. Hit stops, but still looking for the upside.

Financials – Banks have been leading the upside as the stress test is passed. The selling relative to the Cyprus concerns have been mixed, but muted overall. This could nag the sector and we need to manage our stops and potential downside risk.

Energy – The sector hit resistance at the $80 level and is testing the move higher. Watch for support to hold at $78.12.

Consumer Discretionary – Broke above the $51 resistance on XLY hitting the entry point. The consumers are leading the broader market indexes. The stall is with the broad markets, patience short term.

Treasury Bonds – The volatility in the bond sector has risen short term and it is causing grief for investors. Watch and protect on the downside. Estimates are for 2.75% on the 10 year bond by year end? Bounce in motion for the bond off the lows for now.

Convertible Bonds – CWB = 3.6% yield. Price had been moving higher on the current rally in stocks. Starting to see some selling off the highs. Watch stops and protect your gains. 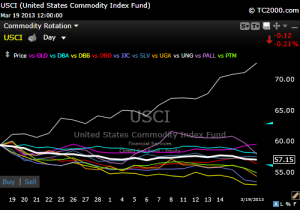 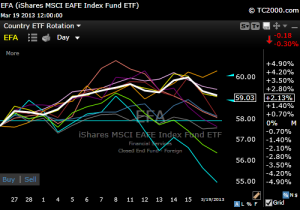