Is it just me seeing all the headlines about Apple and what to expect from the media blitz tomorrow on the supposed release of the iPhone 6? I was starting to think there was more to this than Tim Cook disappointing everyone with his presentation of new products to be released from Apple this fall. The hype around this meeting is bigger than the phone. The stock was doing well in advance of the meeting until Samsung rained on the party with their new tablet announcement last week with 3D capabilities coming soon. While I am not much for using these devices in the way others find of interest, but it did push Apple back below the $100 level and near the $98 support mark. Going into the trading day on Tuesday it is going to be of interest how the stock reacts to the information brought forward. $92.60 is the next level of support and then $89.90. The chart below shows how far the stock has moved off improving earnings data in April. 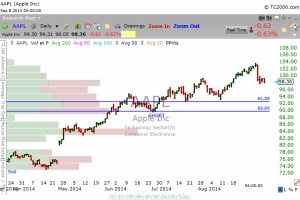 What’s at risk for Apple at their media blitz tomorrow? It is not just playing catch up, but showing they are willing to innovate and surpass what they have done in the past. It is one thing to live on your reputation, but it is completely another to surpass it. It is time for Apple to surpass expectations and dazzle both investors and consumers with renewed innovations in the phone, ipad and watch. The driver for that innovation will be the software behind the hardware. First it will be a matter of keeping up with Samsung and Microsoft relative to the software and widgets that drive the function of the “smart” products. Apple’s iOS7 will need a big upgrade with 8. If there isn’t an 8 released with new features they will be way to late and the stock will likely tumble to one of the support levels above. Now is the time for Apple to come to the aid of their loyal supports and provide innovation that dazzles investors and consumers alike.

Another chart and position of interest for tomorrow is the Russell 2000 Small Cap index. We discussed on Friday the intraday reversal that tested back near the $115 support mark on IWM. The index tested again today and technically made a solid move to close higher at $116.56. This is a positive sign for the index and offers what could be more upside towards the previous high at the $120 mark. As you can see on the chart below the trading activity has been more sideways than up and a move back towards the previous high would provide another chance for the sector to resume the previous uptrend. We bought into the sector off the August low and reversal and I believe the upside still has a chance to validate the upside move and provide a positive return on the short term move.  Biotech (IBB) has been the driver for the small cap stocks and they were up nearly 1% in today’s trading. This sector could hold the key relative to the broader indexes as this plays out going forward. 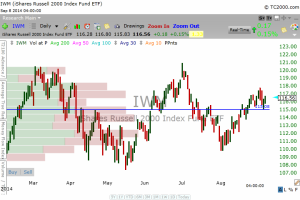 Tomorrow promises to be an eventful day with Apple dominating the headlines once again, but there are other issues that will be on investors minds relative to the broad indexes. Small Caps (IWM) renewing the upside move, the NASDAQ breaking through 4600 and renewing the uptrend, and the Dow clearing 17,150 and establishing a new high. The sellers took another shot Monday at the downside, but failed to control the momentum as buyers stepped in again in the last hour of trading. No big economic data until the end of the week with the Retail sales data released on Friday. Take what the market gives and remained focused on managing the risk of your positions.