Some people read novels and some people read biographies or self help books… I like to read charts and the story they are telling about the various market sectors. A good example of late has been the NASDAQ index chart. The index hit a new high on March 6th and from there has proceeded to move lower with some defined ups and downs driven by news, emotions, speculation and data. Of course what I want to know is why in hindsight, so I can apply what I know to the foresight of the index as I see it. I remember in English class the teacher would give you an intro to a story and then ask you to write the rest using your imagination. The interesting part was with 30 kids in the class I cannot remember a time we came up with the same story, characters or ending. The chart below is very similar in that what will happen to the right of the chart will almost always be different than what we imagine or write down now. 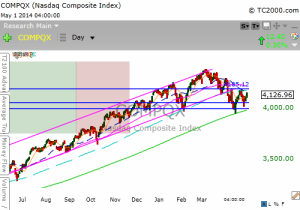 If we look at why the chart has declined to this point from the high on March the 6th we can put the story together that will help give some indication of what may happen going forward. The initial decline off the January high was started in part by the Federal Reserve discussing the need to cut stimulus and hike interest rates at some point in the future. That reality started to happen over the last four months and at each FOMC meeting the Fed has held true to their promise. That action put pressure, looking forward, on the economic data to improve in order for the growth to replace what was lost from the Fed withdrawal of quantitative easing. Winter weather had different plans as the results of the economy slowed. That put pressure on valuations and earnings, which have not been at the level needed. As the fear built the sellers headed for the exits or what they believed to be safer investments without the exposure to the downside of the growth side of the markets. The NASDAQ is full of stocks that are high beta growth stocks, and thus, that put sellers in control short term. You can see clearly on the chart the ongoing tug-o-war between the buyers and the sellers with the sellers in control of the short term trend to move lower. The drivers on the downside were Semiconductors, networking, software, biotech and internet. Each has seen money exit to find what is deemed to be safer havens.

All of that to get to what do we see going forward? What is the unfolding story of the NASDAQ index going to look like? First of all it has lost leadership, and we all know that leads to trouble. The primary leadership in the sector has been technology. Breaking that down further the biotech, networking, software, internet and semiconductors were losing ground, breaking support and showing true signs of the sellers exerting control. Now zoom in on the chart to the December – April time frame on the chart below. 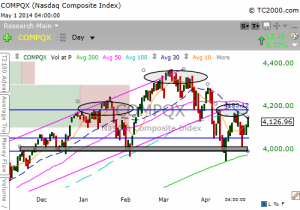 The appearance of a head-and-shoulder pattern is clearly in play. The technical data is showing a key support level at 3990 and the 200 DMA. On April 15th we tested that support and bounced. We are currently trading at 4126 and holding above the support level with another attempt to bounce higher and negate the set up to break lower from the head-and-shoulder pattern. Thus, we are looking at the story going forward to have a one of two outcomes, first, there will be a catalyst that will drive the prices lower, break support and move towards the next level of support at 3850 level on the index. Because of the current setup on the chart, it has a higher degree of probability for happening. Second, find a catalyst that is positive and will drive prices higher and through the 4185 resistance levels and back towards the March highs. In order for this story to unfold, and next chapter be written, we need a catalyst. What could that be? It could be economic, (the jobs report), it could be economic growth or lack thereof (0.1% GDP), it could be geopolitical (Russia/Ukraine going to war) or many other events that are setting up. Whatever, the catalyst the goal is not to be taken by surprise. Writing or imagining what could happen allows you act as it does happen.

Tomorrow is the jobs report. It is one piece of the story and it will have an impact on how this story starts to unfold going forward. Bad numbers will impact the downside story… good numbers will help the upside turnaround/bounce off support story. Watch the numbers, look at the impact and make your adjustments to the story going forward. Trying to write the story in advance (speculate what will happen) is never a good approach to this type of market environment. The catalyst will present itself and with it will come the opportunity to put your money to work in the right sector or asset class. Patience is the key to the story have a good ending.