A quick look at the chart below shows the leadership in the S&P 500 from the June 4th low. The index is the bold white line with the ten sectors in the colored lines. Telecom, Energy and Financials have set the pace for the major index. Industrials and Technology have kept pace with the index with Technology making a stronger move the last week. These are the sectors to watch moving forward if the index is to make a move above the previous high of 1420. They will either lead the way higher or one of the lagging sectors will have to accelerate. 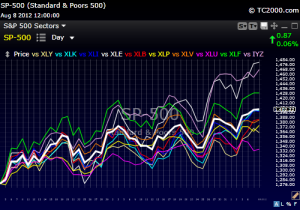 Two of the lagging sectors that could make an impact are Consumer Services (XLY) and Healthcare (XLV). The Consumer Services have been moving higher off last weeks positive retail data for July. If the consumer is engaged investors like the positive sentiment they provide to the markets overall. I would look for them to provide more leadership with August being back-to-school shopping month. Healthcare, on the other hand, is struggling with the projected impact of Obamacaare. The rising costs and burden being placed on the Providers (IHF) is pushing the sector lower. Pharmaceuticals (XPH) have run into lower revenue data on earnings. The near term outlook is for more sideways churning from the sector.

A smaller sector in weighting making a move the last two weeks is Basic Materials (XLB). The earnings in the sector are picking up, but the speculation of increased demand is the true push. Scanning the sector quickly the leadership is easy to see from SHW, APD, PPG, MON, EMN, IP & CF. The other obvious note in the scan is the recent breakouts from consolidation patterns over the last week. This is a sector to dig in and watch depsite the overall weighting to the index it does provide opportunity to investor portfolios.

A review of the global assets classes last night showed a big jump in the EAFE index. The push has come from Europe (IEV) with the comments from Draghi pushing stocks higher. Most of the move is likely coming from short covering relative to Spain (EWP and Italy (EWI) getting a boost from the pledge to defend the euro and existence of the European Union. This is a high risk sector for investing despite those comments. The fix will take more than promises and there is still plenty of fighting to take place to put all the pieces together. Italy’s Prime Minister Monti’s comments yesterday relative to Germany showed how much work is yet to be done.

The Emerging Markets (EEM) are breaking from consolidation as well. The move in the EAFE index has spurred hope of global growth. As we know, hope is not an investment strategy, but the move higher may be worthy of a short term trading opportunity. The move above resistance at $39.80 was a positive, but now the sector faces the 200 day moving average at $40.40. Look for a follow through to the upside on volume as a positive sign for the sector.

The US Treasury Bond has been under pressure with the push higher in the S&P 500 index. The yield on the ten year bond has moved back to 1.64% since the July 24th low. There is resistance at the 1.68% level to watch short term. If the bond yield can move above that it could move back near the 1.9% mark. It doesn’t sound like much of a move, but it would be positive for equities near term. The move would push IEF, iShares 7-10 Year Treasury Bond ETF back near the $105.70 mark or it would create a short opportunity in the bond.

The question in most headlines today… Can the index break above the 1420 level on the S&P 500 index. This has been a volatile rise back to the March highs and there are plenty of doubters in place. Watch the trend, play the trend and protect against the reversal of the trend. The market doesn’t really care what we think of believe!