Investors are torn… buy on the positive data improvements or sell on the worries about the Fed removing stimulus? Friday’s trading day showed the turmoil throughout the day of up and down movement. I does have a tone of the buyers winning short term, but don’t count the sellers out as we progress towards and through earnings.

The bad news on Friday was interest rates resuming the upside and bonds moving lower. The fear built into that move is worse than the up and down movement in stocks. Uncertainty in stocks will find answers and move forward, higher interest rates will impact bonds, housing, REITs, MLPs and automobiles. How big of an impact will depend on how high rates rise. More on this below.

The wildcards remain Egypt, Portugal, EU and Greece, China’s economy, oil prices and a whole list of others. The news has been subdued relative to the globe, but you can see signs of it starting again. The key is to take this one day at a time and define the objectively clearly before putting your money at risk. Below we evaluate the impact and outlook for each asset class and how we want to find the opportunities for putting money to work next week.

The jobs report on Friday was better than expected and the bad news was the Fed will be more likely to start putting an end to stimulus. 195K new jobs were added ahead of the 155K expected. Jobless claims were better as well on the week. ADP employment report was positive as well – a full house on the jobs data.

Construction spending was lower than expected, but still growing.

Factory orders were up more than expected as auto sales show solid improvement.

There is plenty of data to digest this week and more on the way next week. Earnings are just around the corner and will add to the pressure on the markets. The calendar link below will take you to the data expectations for next week.

The May 21st pivot point is in play, but the June 24th reversal on the low is making an attempt to reverse the trend… again. The uncertainty in the broad markets remains a challenge for putting money to work with any confidence short term. The downside leader remains Utilities as interest rates move higher again. Materials are moving sideways, but the balance have bounce with the reversal on the June 24th bottom.

We move back within the target range of 1620-1630 and closing the week at 1625 thanks to the jobs report and the EU adding stimulus. The move lower off the May 21st high is being tested with the bounce. If the major indexes find their way above key resistance and reestablish the uptrend then we will add some upside play opportunities to the models.

Based on the bounce starting on Tuesday last week, Financials, Healthcare and Consumer Discretionary are the leaders on the upside. Also accelerating off the lows was Utilities and Telecom. The other five sectors tracked along with the broad index. The broad index was up 2.1% from Tuesday through Friday’s close. The laggards were positive, but failed to outperform the broad index itself.

Decision time for the broad index and the micro downtrend in play off the May 21st high. This week may set the tone, despite the fact it is a holiday week. 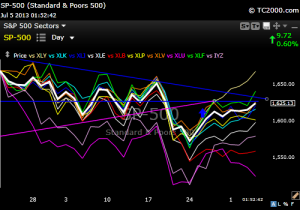 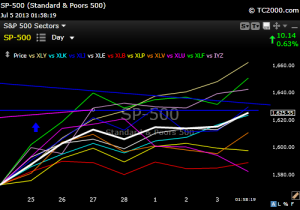 The pivot on the low shows consumer discretionary (XLY), financials (XLF) and telecom (IYZ) leading the bounce. Keep an eye on XLV, XLI and XLE as they are picking up some momentum to end the week.

Downside Rotation: The downside reversal remains for most of the sectors, but the interest sensitive ones reversed lower again on Friday. The downtrend remains for Utilities, Real Estate, Energy, Materials and bonds.

Sideways Trend: The bounce is in play and some sideways movement is in play. Financials, healthcare, industrials, consumer discretionary, technology, consumer staples and telecom.

Upside Rotation: The bounce off the June 24th low remains in play with resistance at the 1630 level on the S&P 500 index. Look for a break higher in financials and consumer discretionary.

As seen below the dollar moved higher off the June 18th pivot point.  Thanks to the FOMC meeting the dollar has regained the upside rotation and other currencies have moved lower. The question mark is will it last or is this just a reaction to the news. Friday’s move shows some conviction with the dollar regaining the previous high at $22.90. 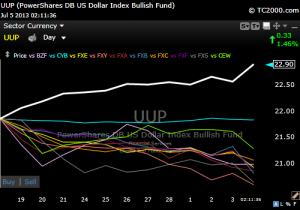 The bond market overall experienced a sell off that is a direct result of the yields rising quickly. There was some calming for a few days, but the concerns resumed on the jobs report Friday. The calm was only a rest to resume the selling as investors worry about the withdrawal of stimulus allowing rates to rise. You know the level will overshot on the upside initially and then settle into a reasonable zone for yields.

Treasury Bonds – The yield on the 10 year bond is up 107 basis points (1.07%) over the last eight weeks. At what point do these bonds become a buy? If you believe the economy is not strong enough for the Fed to withdraw the stimulus in place, bonds will snap back. However, if you believe the Fed will let rates rise as they cut stimulus, the downside is the play. Thus far the vote is for the Fed to cut stimulus based on the move in bonds.

Corporate Bonds – LQD = 3.8% yield. No positions currently. Bounced and sold on Friday in response to jobs.

You can see OIL is accelerating higher along with gasoline (UGA). Others are rotating down or moving sideways currently on the chart. 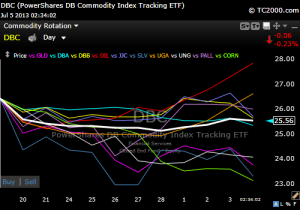 Global markets shifted to the downside and have not changed course yet. The May 21st pivot point lower has been more dramatic than the US markets, but the pivot correlates to the struggles facing the US markets relative to interest rates, as well as China, Japan, Europe and the Emerging Markets.

Japan (EWJ) has become volatile, but still taking the lead on chart below. Canada and Europe are still moving sideways with limited upside. China offers more downside based on the continued weakness in the economic data. Brazil has been the weakest along with the emerging markets.

The chart below shows the downtrend over the last week. 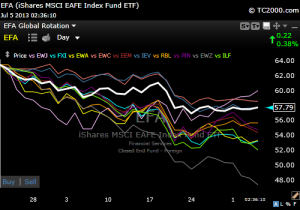 Worries turn to high anxiety on Wednesday with markets selling off more than three percent on the d[...]

Markets reacting to the news not reality

More downside for the broad markets as investors wrangle with outlook. The mega-cap stocks closed h[...]