The broad markets have turned lower on the volatility as the uncertainty around the stimulus and interest rates shook up investors. The snapback rally on Thursday, aka buy on the dip crowd, was of interest as it showed their are still buyers willing to step into the market at specific levels. Some of the move was short covering, but there were still buyers in the game. Friday reinforced the volatility relative to conviction. End result markets close lower on the week.

I am looking for a trading range to develop short term as the uncertainty towards the Fed, interest rates and the economy all play out. It is easy to see the negative sentiment picking up, but then the buyers are there to pick up the pieces as it begins to erode. The goal is to be patient and let this play out and take what the market gives.

Interest rates have been spiking higher and it has created havoc around the globe. Japan was the first to withdraw stimulus and bonds have fallen through the floor, the yen spiked and markets fell more than 10%. The US has been hinting at similar activity by the Federal Reserve, the markets have declined modestly, interest rates have risen and the dollar has declined. This issue isn’t going away, but the rumors are that Mr. Bernanke plans to reassure markets the Fed will use an orderly approach to stem the amount of stimulus being deployed. Time will tell and there will be plenty of eyes and ears on Mr. Bernanke’s comments next week.

Volatility has returned to the markets and it is not being received well. the swings are causing some to run from stocks and others to attempt to trade them. The key for now is to be patient and let the trend redefine itself up, down or sideways. Then you can make better decision relative to the market. Next week promises to be just as interesting as the housing data will ramp up and give further insight to what is happening in the recovery.

More changes for the website implemented! Last week we started the new weekly notes and research! That is this page which used to be update nightly, but we made the change to make the updates focused on trading plan for the week. Why? The goal is to make the research simple to use and easy to follow. Over the weekend you will be able to review the written update and video relative to the coming week. Daily you can review the trading notes in the morning for specific actions and ideas. Nightly watch the video update to gain insight into the actions taken and explanations of each posted opportunity on the Watch list or Notes. The models will be updated each morning in conjunction with the Trading Notes for ease of following. I am looking forward to the new format as it will focus more on specific ideas and opportunities! Any feedback is always appreciated.

Jobless claims were better than expected this week and that is keeping a positive bias towards the economic data. The retail sales were positive and better than expected for May, offering another positive catalyst to Thursday’s move higher. The PPI jumped 0.5% in May, much higher than expected. The core was inline at 0.1%, but higher oil prices got the blame. Consumer sentiment dropped below expectation as well for the June data. Mixed to positive data on the week helped, but this a marathon not a sprint. Housing will be front and center in the data for next week. The calendar link below will take you to the data expectations for next week.

Like last week the major market indexes bounced off support on Thursday, failed to move higher on Friday. The resistance near the 1650 mark came into play this week, but support at the trendline and the 50 day moving average were support for the bounce. I am still looking for a trading range to the result of the current uncertainty and volatility. We have to take it one day at a time.

The April 18th chart below is the last pivot point higher and it is still in play currently. Since the high on May 21st the sectors have traded in tandem with the index. No leadership in either direction which puts us in a wait and see mode heading into next weeks trading. 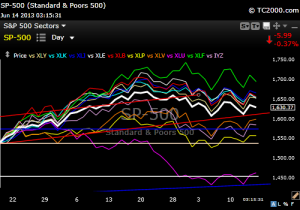 The current trend started on November 15th and has been tested by the the ‘fiscal cliff” issue bottoming on December 28th, The February 25th low pivot point was prompted by FOMC rumor of withdrawing stimulus, Cyprus on March 14th and the April test on economic worries. The current shift off the May 21st high is a result of  the Fed’s potential withdrawal of stimulus going forward. The original target for the move was 1550-1575 which has been obtained and exceeded by nearly 100 points, is now being tested on the downside. Watch and don’t be fooled by the analyst… charts don’t lie. 1597 and the trend line off the November lows are the key support points to watch in reference to this trend going forward. 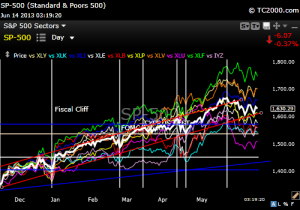 Downside Rotation: Utilities (XLU), Consumer Staples (XLP), Healthcare (XLV) and Telecom (IYZ) have rotated to lower and sideways since the May 21st high. They are on my list of opportunities if a bounce on the upside gains any momentum.

Consumer Discretionary (XLY), Energy (XLE) and Basic Materials (XLB) are trading sideways and maintaining volatility equal to the index. They have out performed the S&P 500 index overall since the April 18th pivot point, but that is little comfort for making money going forward.

Real Estate REITs (IYR) has shifted to a negative trend with heavy selling related to rising interest rates. Attempting to hold support at $65.75. Watching for a short term trend reversal.

Other asset classes downtrends are addressed below.

Sideways Trend: Healthcare (XLV), Consumer Staples (XLP) and Technology (XLK) have been moving sideways will no real signs of leadership since the May 22nd timeline. Financials (XLF) and Industrials (XLI) want to take on some leadership on the upside, but keep getting derailed by the negative sentiment building towards stocks overall.

From the May 17th high (pivot point) we have seen the dollar gradually decline. The downside has accelerated and we added UDN (Two Egg Model) as a position and it has done well. The bad news for the dollar is the strength of the other currencies of late and pressure is mounting. 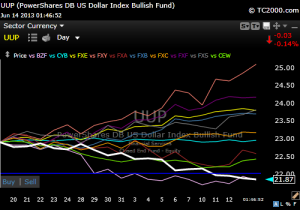 Treasury Bonds – The bond tested the lows or support on TLT and IEF again this week and bounced to end the week, following the Fed comments they would continue t provide stimulus to control rates. Due to the artifically low rates due to the Fed’s intervention, the yields will have to find a level where investors are willing to own bonds and accept the risk.  The volatility in bonds has risen significantly over the last month and we have not seen the worst of the storm yet. It will take time to play out and we will have to monitor the progress relative to putting any money to work in the sector… short or long.

Corporate Bonds – LQD = 3.6% yield. No positions currently. Bounced off the low at $115.25 this week. Watch to see if any opportunity going forward, but for now… pass.

I moved the starting point forward on the chart to May 1st as a potential uptrend. As you can see that didn’t happen and DBC has moved sideways since the start point. PALL moved lower after being the leading the metal. Base metals (DBB) made a near term move lower negating it’s run on the upside. This week oil and gasoline have attempted to move higher, but the driver is speculation. There isn’t much worthy of trading, investing or even watching at this point. Be patient and let the leadership emerge along with the opportunities. 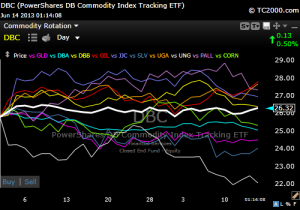 Global markets have shifted to the downside over global economic slowing. The May 21st pivot point lower has been more dramatic than the US markets, but the pivot correlates to the struggles facing the US markets relative to interest rates and the Fed.

The Asian connection is hurting the overall index.  Japan (EWJ) was selling off all week as the Bank of Japan fails to step in and defend the bonds from rising interest rates. The ripple effect has been felt, but the damage has been done for now. China (FXI) has struggled on the downside as well showing slowing growth that has disrupted investors. Europe (IEV) has held up better, but is still a big question mark. There is a possible trades going forward we have posted to the ONLY ETF Model Watch List.

The chart below shows the sideways trend over the last week. We are short China and Emerging Markets currently.  Adjust your stops on the plays going forward. EFA is forming a bear flag and that isn’t good for any upside bounce near term. 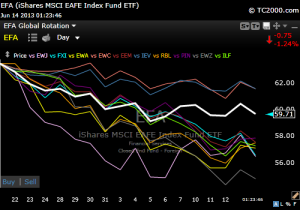 Real Estate Index (REITS) – The sector broke the uptrend and signaled exits. The interest rate rise is playing havoc on the sector. As this unfolds there will be plenty of opportunities to play the bounce. Watch, be patient and disciplined. The bounce on Thursday failed to produce much on Friday, but we have seen a new low for now. No trade opportunities yet, but we continue to watch how this will play out.

Sector Summary: Downtrend in play and uninterested in the sector currently. Some basing starting to show in the charts. We will continue to watch for the next opportunity, but for now no positions. The emerging market bonds did manage to bounce off the lows and we are watching for any resulting opportunities.