We end the week at a record high and headlines are full of what if… scenarios. This remains a challenging market relative to emotions and worries. One day everyone is worried about the Fed and the cutting of stimulus and the next everything is okay and the market trek higher. The bottom line is what’s on the chart and for now that is a ‘V’ bottom reversal on the pullback in May/June. The move above the previous high is positive for the buyers and the upside is confirmed to be back in play of the previous trend from November.

How do we deal with it relative to our portfolio? Follow the trend until it is not the trend. To second guess the move or try and make any sense of the fundamental data versus the charts will only drive you towards insanity.

There is plenty to cover this week below as we look forward and determine where to put money to work and how to manage the positions we currently have. Earnings are going to speed up this week and they will play a role in the outcome. There is more economic data on tap and of course the Fed will continue to attempt to make everyone feel better. Despite all that we have to follow the money.

Below I evaluate the impact and outlook for each asset class and how we want to find the opportunities for putting money to work next week.

The data this week was mixed, but mostly on the positive side. Consumer credit jumped showing that the consumer is spending again and retail responded. Small business index fell (big surprise), Wholesale inventories were lower, weekly jobless claims rose to 360,000 (higher than expected), mortgage applications dropped on the rising rates (expected, but not liked), import prices declined (positive news), Core PPI was up 0.2% and more than forecast, gasoline impact on the topline was bit pushing prices up 0.8% on the PPI data, consumer sentiment was lower than forecast (it was ignored) and the bottom line… none of it mattered.

Investors are focused on buying now and the future will take care of itself. Market runs like this never end well. There is plenty of data to digest next week and it will have an impact (supposedly) if the numbers don’t measure up. Earnings are in play will add to the pressure on the markets. The calendar link below will take you to the data expectations for next week.

The June 24th pivot point is where we are watching currently as the bottom has been established along with a new high. The scatter chart below, from my view, shows a lack of true leadership in the broad market index. Wit all the sectors near the index itself is shows a broad move in the market, but is lacks leadership. Lasting rallies tend to have significant leadership with a defined rationale behind it. What we are looking at is broad movement and buying it all, or just buying the index itself as a trade on the upside.

The ‘V’ bottom move has been significant and the buyers are still willing to step in and believe that Bernanke and friends are not going to make any drastic changes to stimulus and all is well in the US markets. Right or wrong that is what the markets are trading on currently. Our job is to take what it gives one day at a time and then make our changes accordingly. 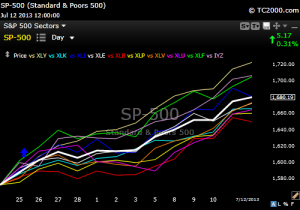 The shift back to the previous trend is worth looking at the chart off the November pivot point again as a refresher of what is in play currently. Note the previous leadership from financials and consumer discretionary is back in play. 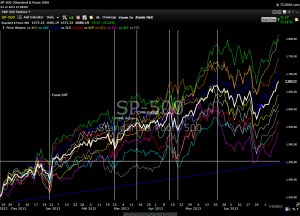 Downside Rotation: The downside short term has reversed and for now we are just on correction/reversal watch in the current upside move.

Sideways Trend: The bounce is in utilities has pushed the index sideways and wants to re-establish the upside move. Real Estate is like utilities upside move off the low and now facing resistance to shift to an uptrend. Telecom made a move on Friday to push higher and has joined the upside rotation.

Upside Rotation: The bounce off the June 24th low remains in play with financials, consumer discretionary, healthcare, etc. leading the upside. They have all reversed short term to push the broad index higher.

Updated the S&P 500 Model Watch List to reflect the moves this week and looking into next week’s trading. We are close to being fully invested in the model and you need to manage your risk accordingly.

As seen below the dollar moved higher off the June 18th pivot point, but this week gave some back as the Fed comments towards stimulus and the markets hit the dollar. The resistance at the previous high came into play and the trend is being questioned along with Mr. Bernanke and his intent towards both interest rates and stimulus. 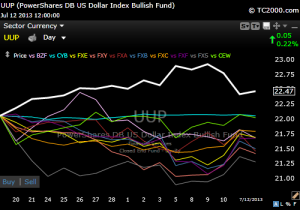 The bond market overall experienced a sell off that is a direct result of the yields rising quickly. The Fed may have finally succeeded in talking bond investors in off the ledge. The rates did calm again this week on the comments from Bernanke as he attempted to explain the Fed actions and what they mean to interest rates. The Fed doesn’t want or need higher rates currently. upside trades are there if you are willing to accept the risk associated with the news.

Treasury Bonds – The yield on the 10 year bond found some relief with a modest bounce off the low. The 30 year held its ground, but looks to bottom at the current level as the Fed talks calm to the bond market. The proof is in the yield so to speak and this is something to watch as we move forward.

High Yield Bonds – HYG = 6.7% yield. Bounced and looking for an opportunity versus speculation.

Corporate Bonds – LQD = 3.8% yield. No positions currently. Bounced and hitting against resistance near $114? 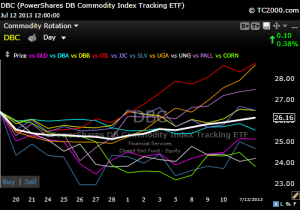 Global markets shifted to the downside and are attempting to make a move off the low, but have not really be able to gain any momentum as the economic outlook remains questionable. Japan, Europe and Canada have been outpacing the index, but even that is questionable. Take it slow in the global arena short term.

Japan (EWJ) has become volatile, but still taking the lead on chart below. The emerging markets continue to lead the downside risk short term.

The chart below shows the downtrend in play. 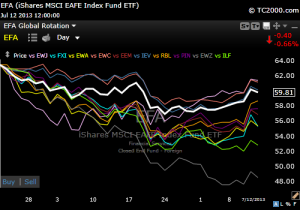