I would like to say that the FOMC meeting injected volatility back into the market, but the VIX index doesn’t reflect that. However, the bond market, commodities and interest rates do show the effects of a spineless Fed. As we discussed in the video update the last two nights, there is a rotation of money in place and it will eventually impact stocks if the speculation gains momentum. This in turn puts the wall-of-worry back on the table as investors discuss, speculate and attempt to anticipate what will take place in the broad markets. My suggestion is to take this one day at a time and let the trend unfold.

The S&P 500 index added two point for the week closing at 1761 and held the breakout move from two weeks ago. The five days of trading were more adventurous than the end result. Earnings and economic data were a catalyst to the upside, but the FOMC meeting was wet blanket on the markets overall. The upside target remain 1800 and our support or test zone is 1657-1710 should the sellers make an attempt to push the markets lower. Raised stop on our position in S&P 500 Model.

The NASDAQ tested and actually closed lower on the week down 21 points to close at 3922. I would call the activity selling as much as drifting lower on news and speculation relative to the Fed. 3890 is our support initially and then 3800. The upside is 4000 for now. Technology has been a driver for the index, but it is showing some signs of slowing.

The Dow pushed back to the previous highs at 15,706, but closed at 15,615 up 45 points on the week. The chart shows the trading range for the index and if it going to break to the upside near term it will need a significant catalyst to accomplish the task. 15,400 is the support level to watch near term.

Russell 2000 Small Cap index showed the most downside effect of the week testing key support near the 1085 level on Friday. A break of this level would be the first negative indicator for the broad markets and it is important to watch going forward. 1070 is the next support level to watch. On the upside a move back to the 1120 high would be a good start.

There is plenty of talk about the Fed impact on the markets going forward relative to the stimulus cuts. Until the Fed actually acts investor activity is nothing further than speculation looking for validation. That leads to a news driven market which tends to be very choppy. Don’t beat your head against the wall attempting to guess which direction we are headed. Be patient and disciplined in your approach to the market near term. Remember, cash is a sector.

The economy remains unimpressive relative growth, but steady as it goes again this week. I would have to say the data supports what we have been seeing with steady growth and some modest hiccups along the way. The ISM Manufacturing data on Friday was positive versus the excused of the government shutdown causing a move lower. Maybe because the government jobs don’t manufacture or produce anything it didn’t impact the numbers. The ISM Services number on Monday may show a different story.

Friday is the delayed jobs report and I am not expecting anything positive to result from the numbers. If anything it may reinforce the Fed position on stimulus as the rate of unemployment is expected to rise due to the shutdown. It will build throughout the week as a big event.

The calendar link below will take you to the data expectations for next week.

The models still face the challenge of dealing with the buyers versus the sellers. The sellers are still unwilling to take on any risk short term (i.e. Thursday early selling gave way to the buyers… again, as well as on Friday). We are still adding 1/2 position sizes with the entries hit as the risk remains elevated. Added some short plays on ONLY ETF Watch List for next week. Will the speculation with the FOMC comments continue or is the worst of it over? It is a stretch to believe the Fed will cut stimulus in December… my view. Crazier things have happened, but we will still trade the charts. We continue to see rumbling from analyst about the weak economic picture and now the financial networks are picking up on the theme. Manage your risk on trades more aggressively and monitor your longer term holdings.

As you can see on the Scatter Chart, the latest low posted on October 9th shows the move higher in the US markets as well as the EAFE index. However, at the end of the chart you can see the US market turn lower to sideways while the EAFE index drops lower along with the Emerging markets. The dollar turned higher on the FOMC comments which also impacted real estate on the downside along with bonds and commodities. This week is one to focus on outcome or validation relative to the Fed speculation. Watch the downside to continue in these asset classes if there is any truth to the Fed cutting stimulus in December. 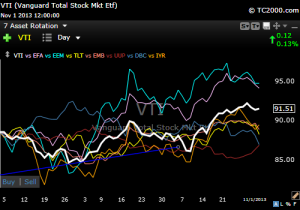 Looking at our sector rotation chart below with the October 9th pivot point, the sectors were trading in step with the index again as the broad markets fail to break away from the one for all mentality. This is not a bad thing, but lends itself to just buying the broad index or the leading stocks. Consumer Services (XLY) remains the leader, with Industrials (XLI) and Consumer Staples. Some downside movement in Basic Materials (XLB), Energy (XLE), Financials (XLF) and Technology (XLK) on the week. Watching as stated above the impact of the Fed going forward. 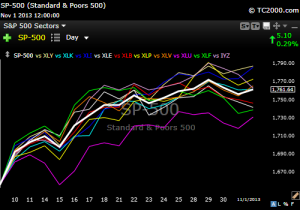 The dollar shifted gears on the rumor of cuts in Fed stimulus. True or not? We will see, but the dollar responded to cuts in excess spending from the Fed. All of the currencies on the chart responded lower as a result. The short yen and euro play are on the table it the trend continues this week. 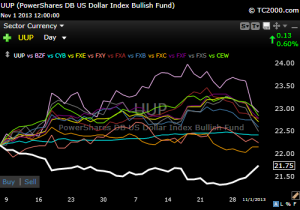 The sector turned sideways, but thanks to the FOMC meeting they are heading lower on the rumor of stimulus cuts as rates rise. Risk is too high and hit stops on all bond positions this week. Looking at the downside play with TBT on Treasuries, but that is it for now. We will watch for the upside opportunities if the rumor proves to be false going forward. 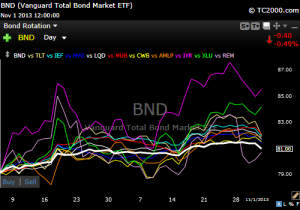 Treasury Bonds – TLT or IEF dumped lower on the Fed rumors. No positions currently, too much volatility for my taste in owning bonds.

High Yield Bonds – HYG = 6.4% yield. Bouncing off the $91.25 support and may have some interest if we can hold steady and manage the risk of the trade short term. Gave an entry signal at $92.30 and moved above the 200 DMA. Don’t own the bonds, and I would move my stops to break even on the recent events with the Fed impacting bond prices.

Corporate Bonds – LQD = 3.9% yield. No positions currently. Broke higher on the resolution to the budget with entry at $113.75. I would have a stop at break-even on any position short term. Big dump on Friday in response… keep stops in place or take your exit if you don’t like the rumors.

Convertible Bonds – CWB = 3.6% yield. bounced off $43.75 support and $44.80 entry point. Watching the upside and volatility. This is the one bright spot in the fixed income class. Continued trek higher and put stops at $45.50. Not much in terms of reaction to the Fed.

4) Commodities – The chart below shows the move lower on the week in the sector. The rumor mill relative to the Fed cutting stimulus sooner started on the FOMC notes and that hit commodities. Gold and oil dropped as the dollar gained strength. Agriculture fell and base metals have held their ground for now. The outlook is negative for now, but that only means opportunity on the reactions will result in these commodities. Watch and set levels of opportunity on the move.

We did short the gold miners (DUST) and crude oil (DTO) on the move lower. These are trades only in reaction to the news. Watching and measuring the exit points.

Natural Gas (UNG) made a solid move lower and we took the short play here as well (KOLD). 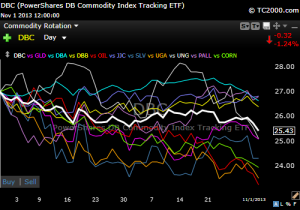 The global markets remain tied to the US and until things change economically that will remain true. However, last week we did see a bigger reaction in the global markets to the FOMC notes. The fear of a stimulus cut globally would be a negative. Looking at the chart below you can see the short lower off the 10/22 high. Brazil is the obvious loser with the issues they are facing economically. Europe has reacted along with Japan. China was higher on economic data, but don’t expect that to last short term. We don’t own the global markets currently and willing to wait and see how this plays out short term. 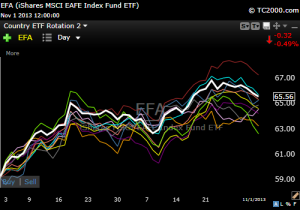 Real Estate Index (REITS) – The sector has become erratic and volatile relative to tracking every rumor on interest rates and the Fed. We have attempted to manage positions in the sector, but they have been up and down. If you want to own this you have to take a long term view and manage the position for the dividend. Looking at adding this to the Sector Rotation Model and using SRS to manage the risk of the trade.

Sector Summary: Bounced off the lows and trending sideways. No interest currently.