The day the Sequester became real… new at eleven. I feel like I am watching an old commercial for the nightly news as the media hypes the budget cuts of $85 billion. They act as if this is 50% of the total budget versus 2%. The cuts are not ideal by any stretch, but some spending cuts are better than none. The two bills were rather interesting to say the least. But, the proposal to use alternative spending cuts and again raising taxes further on the rich! I will take the cut the way they are going to come down on this vote.

What does that mean to the market looking forward? The chart below is the intraday five minute chart of the S&P 500 index. Guess where the failed votes in the Senate were announced. That is correct… where the white horizontal line is drawn. While the decline was only 0.5%, it is the message of what we may see tomorrow as follow up to the news on the budget cuts taking place. 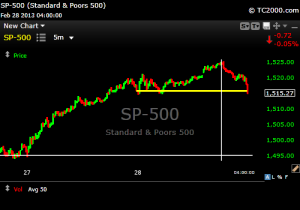 I am sticking with my views and continue to dig in to gain some insight into the current activity. This is not the kind of market I like, nor do I like the risk of this environment. The following are my key concerns:

Today brought some reality to what may be in store for tomorrow. It is important that we are willing to be patient and let the volatility play out short term. This could get even more interesting than it already is.

The focus is now on the budget cuts of $85 billion. Analyst agree the cuts will have an impact on the economy over the longer term and could cost up to 1 million jobs. In the end only time will tell, and more is made of these issues than ever really materializes.

Despite the cuts some positive news from the 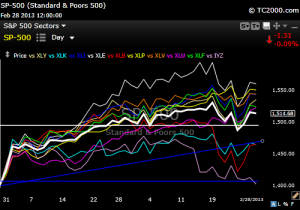 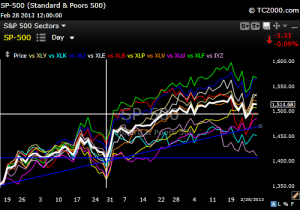 Financials – Hit our stop, but still looking for the upside opportunity in the sector. The sector should still benefit on the upside if we and when the volatility dies further.

Euro – The euro (FXE) bounced off the support at $129.50 and ready to break above the $130.50 resistance level short term. Watch for upside opportunity if this holds. Reversed on Thursday and the downside resumed.

Treasury Bonds – Reversing again on the rally in stocks.

I am starting to like the long IEI vs the short TLT paired trade longer term. Working on the idea of the trade currently.

BAL – A trading range of $52.80-54.40 is in play. A break higher would be a continuation of the move off the November lows. Stalled and trading sideways. Watch and see it this can break higher. Tested lower again on Monday and back near the high on Wednesday? Thursday closed at the break out point watch for trade on Friday in the commodity.

EFA – Broke support at the $57.62 mark on Monday and traded back above that level on Wednesday. The close above the 50 day moving average was another positive for the global ETF. Still not interested short term.

IEV – Attempting to bounce of the support at $38. Watch as this plays out. Any talk currently is pure speculation, let the trend speak on direction short term.

FXI – Took the short play in FXP and watching the bounce off support near the $37.75 (FXI) on Wednesday. protect the downside against any bounce short term. Thursday bounce continued, but need to move through resistance at $39.25.