The Federal Reserve attempts to put investors at ease with multiple comments to ease the sting of the FOMC minutes. The conclusion now is they will continue the funding of Treasury purchases going forward and the market rallied back on Friday. I love when volatility steps into the market driven by news. The reaction to the Fed actions is expected when you consider it is the one piece driving the markets currently. The economic data is certainly not adding much to the growth side of the markets. Some will be happy heading into the weekend with the bounce, but I think it only stirs the pot of what to expect going forward.

This the week of the budget cut deadline. Or now known as sequestration. The total cuts are not as dramatic as the media has made them out to be and they will not really impact the operation of government. In fact, one report noted the net spending for the fiscal year would still rise over $15 billion.  The real impact will be psychological and the markets will likely react to the act itself more than the economic impact of the event. Another outside market event that will add to the volatility on the week.

Scanning the comments from investors, analyst and money managers today provided plenty of humor as the differences were as diverse as VXX from yesterday to today. The bottom line is keep your focus, manage your risk and know where the exits are before the fire starts.

There is plenty of homework to do this weekend. I will update this page further on Sunday to add additional research. Also the Research Picks Watch List Table will be updated and published on Sunday. Next week promises to be interesting!

This was not the best of weeks for the reports, but as we saw on Friday all that seems to matter is that the Fed remain engaged in putting money into the system. We can attempt to give Hewlett Packard credit for the gains on Friday, but the comments from Bernanke and the 12 dwarfs over the last 48 hours are what calmed the markets for now. 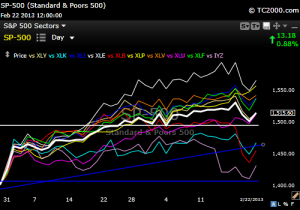 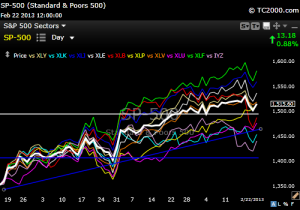 Technology – The parts are better than the whole. Dig in and find the leaders.

Financials – Bounced Friday after some selling hit our stop on XLF. Banks and brokers are the drivers short term. Watch both for the upside opportunities.

Treasury Bonds – The move in yields hit the exits for the short side play with TBT. The upside play with TLT is starting to be attractive short term for a defensive move.

Corporate Bonds – LQD = 3.8% yield. The price has found short term support ($118.90). Broke above resistance at the $119.50 level on Thursday. Held the move and we will watch for a trade opportunity short term.

BAL – A trading range of $52.80-54.40 is in play. A break higher would be a continuation of the move off the November lows. Stalled and trading sideways. Watch and see it this can break higher.

UGA – Testing support at $63 watch to see if any opportunity develops short term. Bounce 1.3% on Friday.

GLD – Downside follow through on the metal. This is the accelerated selling we discussed and we will monitor to see how low it will fall. GLL short trade working from the Research Table. Raise stop and manage the risk.

EFA – Dropped last week on Spain and this week on US markets. The support levels at $58.15 broke on Thursday and bounced back on Friday. Watch for the next opportunity.

IEV – Dropped last week on Spain’s sovereign debt concerns. Testing the first level of support at $40.  Euro-zone GDP data didn’t help the situation. Hit exit points and now we wait to see how it plays short term. 1.5% bounce on Friday worth keeping our eye on.

FXI – China’s PBOC announced they would cut off money relative to the real estate market and repos. This is equivalent to what the Fed announced on Wednesday relative to quantitative easing. The impact was four days of selling. FXI, GXC, etc. all fell nearly 5% on the week. Watch to see how this downside move plays out. If the PBOC is serious the economic impact could be big for China’s market. Watch FXP.

The pullback test is in play for IYR and $67.25 is support. Small bounce on Friday so we hold and see how it plays.