What is wrong with Washington? Nothing new it is just in the headlines as they argue. It is like watching a bad sitcom on TV, the only difference is you can’t change the channel. That aside the ‘hope/rumor’ of a settlement reversed the selling and brought the buyers back to the table on Thursday. That may change on Monday as the ‘rumored’ settlement fell apart as the greed to get their way shifted to the Senate. However, that deal fell apart. That could mean a negative start to the week if they don’t patch things up before the opening bell. Some traders are loving the volatility others are dizzy from the roller coaster ride. Investors are sitting and watching the days go by as the media counts the number of days and finds as many gut wrenching stories as possible on the impact the government shutdown. Bottom line… it promises to be interesting this week as the market, the media and Washington turn into a soap-opera made for TV.

In two days the major indexes erased the three weeks of selling? If there was a signed budget and debt ceiling bill I would say I understand, but to jump on the rumor only solidifies the saying, ‘buy on the rumor and sell on the news’. Thus, watch the news on Monday. The S&P 500 index closed at 1703 and Wednesday was testing the 1643 support. The move back above 1697 on Friday was a positive for the upside, but I would expect some profit taking early in the week and a test of the move higher. If not, look for a move to 1730.

Even the weakest index, the Dow, moved back above 15,100 to close at 15,237 at the 20 DMA. The bounce off the 200 DMA recovered the up trendline off the November low to keep the hopes alive of a continued move higher. We sold our short position in DXD and looked to be long the index on the move. Still plenty of issues surrounding this market and I would expect some short term profit taking as we move into next week.

The NASDAQ was not to be outdone with move back to 3791 on the close and near the 3817  high in September. The index is still clearly the leader of the major indexes, but did show the downside risk on Tuesday and Wednesday. You have to stick with the upside for now, pending the outcome of the budget battles in Washington. The

Russell 2000 Small Cap index equally moved back towards the current highs following a test lower earlier in the week. The index also gets the volatility of the week award. Not for the faint of heart at this point.

Is it time to be short the market? While some believe that is the play, I am not convinced that is going to be the outcome of the current activities. We have to be patient and let the noise and events impacting the market play out and then we will have a clearer picture of what actions to take. The short trades driven by outside news are dangerous, especially if you get caught on the wrong side of the trade with the wrong news release. Patience remains the best course of action going forward.

As we look towards next weeks trading we have to be mindful of all that is still on tap! The budget, the debt ceiling, the fire hose of earnings, more economic data delayed or not, more lip service from Washington and plenty of media drama.  Then there is still the Fed issues relative to stimulus that will not go away, but it has been put on the back burner for now. All said, another busy week with something for everyone.

Most of the data has been delayed as a result of the shutdown. The FOMC minutes and the Michigan consumer sentiment reports were the only reports released and they didn’t really offer much to run on. The jobless claims on Thursday were useless once again because California had a computer glitch… isn’t that where silicon valley resides? Can’t someone help out the state with their programming?

The calendar link below will take you to the data expectations for next week.

As you can see on the Scatter Chart, since the Jun 24th pivot point, it has been up and down without much in terms of leadership. In early September the Emerging Markets (light blue) made a move to take on some leadership, but that has not played out as well of late. Until something breaks higher and leads the broader markets expect move of the same relative to sideways movement with volatility. 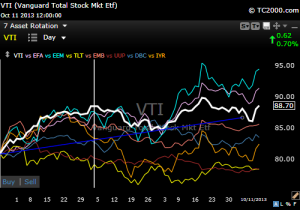 Looking at our sector rotation chart below with the September 18th pivot point, the sectors were trading in step with the index and despite spurts of hope the index continues to trade in unison without much in terms of leadership. Telecom remains on the upside, but I am willing to wait for more clarity in the overall index at this point. 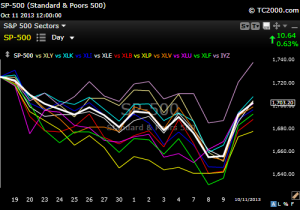 The dollar got crushed by the Fed stimulus addiction, but held some support and continues to move sideways for now. Regardless the but is still in a downtrend and not likely to change anytime soon or at least until Washington puts it’s house in order short term.

The other currencies remain sideways with the exception of Brazil (BZF), which made a nice move higher as they continue to make stride in turning their economy around. The consolidation pattern setup on BZF made move above $18.30 for the entry and is now dealing with the 200 DMA at $18.60. 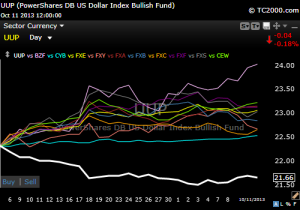 The bond market has turned sideways and the push lower in rates has subsided and all is calm for now. Once the debt ceiling and budget are out of the headlines this will come back to the forefront as the Fed decides direction on the stimulus. Be patient and let any opportunity develop. 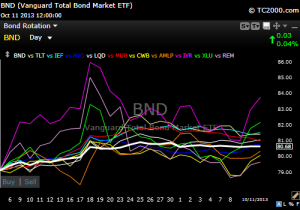 High Yield Bonds – HYG = 6.4% yield. Bouncing off the $91.25 support and may have some interest if we can hold steady and manage the risk of the trade short term.

Convertible Bonds – CWB = 3.6% yield. bounced off 43.75 support and $44.80 entry point. Watching the upside and volatility. This is the one bright spot in the fixed income class.

***Fixed annuities have finally returned to the 3% guarantee mark (five years). The best five year CD currently is 2.1%. As these yields grow they will attract more money. I view that as a positive for stability in the markets overall.

4) Commodities – The shift in the sector was lower on August 28th and it has continued the slow progression to the downside and sideways since. There is not leadership and nothing to venture into other than trades on news. There is no sustainable trend currently in play and thus we are unwilling to take any speculative risk.

Natural Gas (UNG) made a solid move to the upside all week back near the previous high of $19.75. Watching the move for opportunity short term. 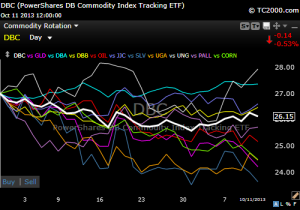 The global markets remain tied to the US and until things change economically that will remain true. The chart below shows the shift in trend on August 30th, but not much to really show for the move. It has been a nice trade, but that is flattening out on worries about the US.  Thursday, PIN, India moved higher and Brazil (EWZ) is moving as well. Watching Europe consolidate in response to the US issues. In all this is a asset class to watch going forward. 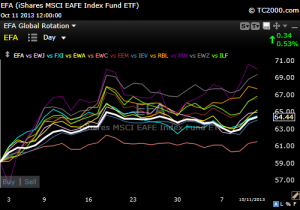 Real Estate Index (REITS) – The sector bounced on the Fed decision and has tested back on concerns in the markets overall.  Too much noise and not worth the risk currently as the volatility has returned of late. The bounce on Thursday follow through the $64.80 resistance and watching to see if it holds the move this time around. $65.30 trade entry with 1/2 position size and $65.35 stop, tighter than usual.

Sector Summary: Bounced off the lows and trending sideways. No interest currently.