No new confirmation only a give back of the Friday gains to start the trading week. The one day of optimism was offset by the concerns over Spain. The interest on their bonds rose above 5% again sending equity markets lower. Europe (IEV) fell 2.7%, Spain (EWP) was down 5.4%, Italy (EWI) down 5.8% and Germany (EWG) off 3.6%. That is not what investors were looking for, but if you look at the chart of Spain (EWP) the downside started three days ago showing concern on the rise. This of course begs the question… will Europe rekindle the downside fear and push investors to the sidelines again? There is plenty of speculation when it comes to the issues facing Europe overall and this is nothing new. However, it has been silent relative to the headlines. Is this a renewed concern over Spain or just an excuse to sell in a ‘overbought’ US market? The story in Europe really isn’t much different if you look at the charts of the country ETFs above. This is all food for thought and we will have to watch to see how it develops.

The dollar rallied along with bonds as interest rates declined from the recent highs. We stated last week that the selling in bonds could be overdone relative to the Federal Reserve remaining engaged in buying bonds actively. Throw in the European sovereign debt issues again and this could get interesting for the dollar, interest rates and the euro. The reason I mention this issue is the talk concerning the rotation of money from bonds to equities. This could slow down the process if it evolves further. A look at the various bond classes shows an exodus of investor money to other sectors or cash. 20+ year Treasury Bonds (TLT), High Yield Bonds (HYG), Investment Grade Corporate Bonds (LQD), Total Bond Index (BND) and others show a renewed push lower over the last couple of weeks. This move may continue over time, but for now the shift in the dollar, interest rates and stocks today is worth watching for the impact to each asset class involved. The charts below show some of the downtrends in place with bonds. 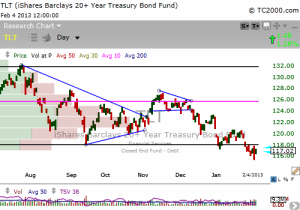 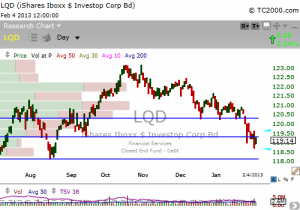 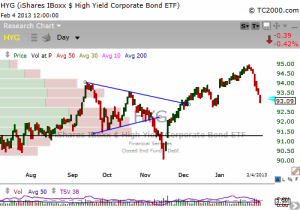 The downtrend in bonds is building, but short term it may see a reversal on the news. This is not likely to erase the downside assuming that the news globally isn’t going to reach the concern levels they did in 2011. This will create both short term trading opportunities, as well as the longer term trades.

China was lower on Monday. The chart below shows the break of support at $40.88 from the four week trading range. The downside pressure from economic data in China as well as global issues in Europe sent the ETF lower. The volume spiked to nearly double on the selling Monday. This is something to watch short term to see if the break lower plays out or it reverses back into the trading range. 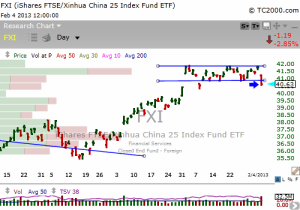 The reversal in the NASDAQ on Monday was ugly as well. 3124 is the support level to watch short term on the broad index. On Friday we cleared the resistance at 3160, Monday that move didn’t hold, and the move below the 10 day moving average was a negative as well. This is the index with the greatest downside concern short term. The technology sector has not provided any real leadership overall, but networking, software, internet and semiconductors have all had their day in the sun. The NASDAQ 100 index has set up very similar with support at the 2700 mark near term. If we break support on the major index it will add to the downside pressure for the markets overall.

Other concerns from Monday include the extended selling in high yield bonds. That is not a good sign for stocks as the bonds have move down over 2% in the last week plus. HYG shows support at $92.75 and a break lower would be an additional negative for stocks.

One day at a time as this all plays out. Keep your focus and measure each position accordingly. Manage the risk and protect against any acceleration to the downside. Money management is all about risk management.