Current Story of the market has added some certainty as the Fed insist that the economy is improving and growth remain stable. The buyers have bought into that assumption pushing the indexes back to the previous highs. Interest rates have flattened on the Fed outlook and belief of no rate hikes until late in 2015. Volatility has died down to the 14 level on the VIX and has allowed the upside to prosper short term. For now all is calm and supposedly positive… one day at a time as this unfold into the end of the year.

The Fed still wants to engineer a positive ending for the global markets, US markets, bond markets and every other interested market. It just isn’t going to happen that way and the sooner they rip the band-aide off the sooner the healing process will begin.

Each week it is good to take a step back and look at the broad view of the market. This allows you to dig into the asset classes of interest and know which to avoid. The current market cycle remains US driven. Simply put the US markets are driving the bulk of the profits and currently offer the best risk/reward relative to the investment markets overall. For that reason we remain cool towards investing outside the US, but continue to look for the opportunities throughout the world. Below we briefly discuss each of the seven asset classes in reference to the scatter graphs using Telechart 2000 software. You can watch a quick video here on using our desktop within their software or email Don@JimsNotes.com for more information.

As you can see on the chart below the US stocks have been leading the move to the upside of the last low or pivot point on October 15th. The chart of the seven asset classes reflect what I stated above about the US markets continue to lead the upside. For now all things are good relative to the upside working higher for stocks and bonds are working lower as interest rate rise modestly. Key points outlined below. 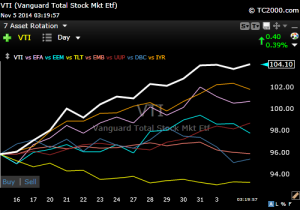 Using the latest pivot point (October 15th) The overall trend is up for the broad index. The leadership is coming from healthcare and industrials with financials and technology gaining some upside ground the last week of trading. The rotation in leadership has helped the index push back to previous highs and complete the ‘V’ bottom that has been in play the last month. Earnings remain a driver as well as the Fed. Watch, manage your risk with stops and look for other sectors to join in the push higher. 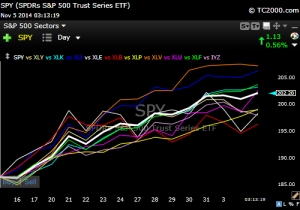 We are working off the June 30th bottom for the dollar we can see the solid uptrend for the dollar. However, since hitting the high on October 4th the buck has struggled and moved sideways to higher of late. It is still outpacing the other currencies compared below. Renewed strength this week from the stimulus move in Japan. YCS jumped as a result versus the dollar. 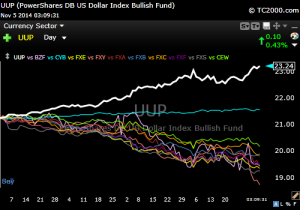 You can see on the graph below the Vanguard Total Bond ETF has almost flatlined since the last pivot point on September 17th. Because of the ‘V’ bottom move in stocks the bonds show the tale of two cities. The Treasury bonds move higher as fear rose and the convertible and high yield bonds moved lower. Risk/reward is the primary mover when this happens, but there was the fear of higher rates behind the move. For now Fixed income has settled, but the Fed news and actions will keep bond investors on their toes. 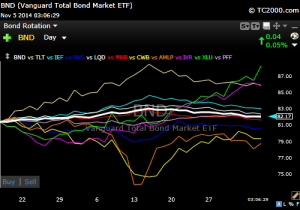 The commodity index (DBC) made a second pivot lower on September 1st and has not looked back since. It is important to note the bottoming attempting to take root the last two weeks failed and the downside resumed. This has been a result of the dollar being stronger and the demand being lower. Until this reverses near term the downside remains in play and not much on the horizon that would change this direction other than for a trade. 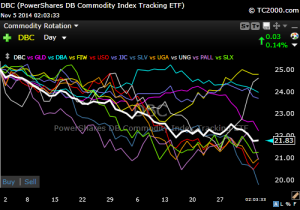 The global markets have shifted in conjunction with the US markets at least as far as the EAFE index is concerned. As we can define on the chart the big move in Japan is testing lower following the stimulus surprise last week. This is still a weak asset class and the leadership is not present. It is content to follow the US equity markets for now. Still willing to practice patience as this unfolds. 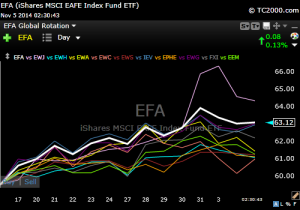 The REITs moved off the October 7th low and started a new upside move. The upside remains in play, but the one concern is interest rates and any hike would have a short term impact. For now positive and continues to move higher. 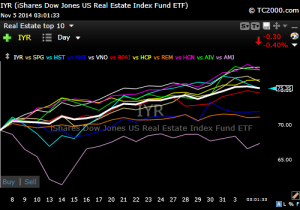 Using the Vanguard Total International Bond Index Fund as a bench mark we find it is still leading over the higher risk assets in the sector. 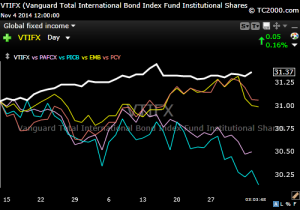 Watch and trade according to your risk tolerance. Everyone has different trading styles and you have to find what works for you and your personality. Don’t put yourself in positions you don’t understand or take risk you can’t tolerate. Not every trade results in a profit, but controlling your risk will limit the downside losses.