Negative close on Friday, but positive week overall. As we look at the close on the three major indexes they remain in a defined uptrend with no real sign of selling off. Now as sure as I say that there will be something on Monday to make me regret the comment. Regardless you have to go with what the charts are saying combined with the fundamental data. Thus, the uptrend is in play and we will go with that until something changes. Scanning for rotation we continue to see developments on the upside along with some warnings.

Good week of trading, but the negative tone from analyst continues. They will be right eventually and we have to be prepared for what happens. Stay focused, be disciplined and follow your plan.

S&P 500 Index closed down along with the NASDAQ and the Dow. String of up days comes to an end.

The February 25th low pivot point remains in play this week. The chart below shows the leadership from XLY & XLF holding the move higher. XLB remains positive in the upside mix. XLV, healthcare pushed lower on Friday to undercut the S&P 500 index as a laggard. Energy (XLE) is producing a volatile uptrend short term. IYZ, telecom finally resumed some upside movement on Thursday, but gave some back on Friday. Not enough on the downside to raise unjust concerns, but we have to manage the risk should the selling gain any traction near term. 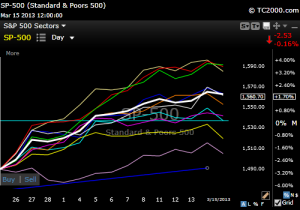 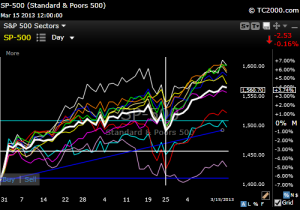 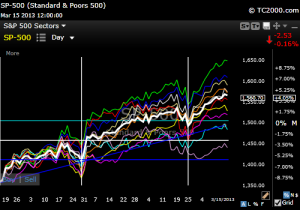 Technology – The sector finally made a move above the top side of the trading range. Oops, didn’t hold the move today and testing range again. XLK broke above the $30 level and held. The entry point was hit on XLK and IGV. IGV is holding near the high and need to adjust the stops. Added to the Sector Rotation Model Portfolio.

Financials – Banks have been leading the upside as the stress test is passed. Thursday the Fed approved 14 of the 17 banks for capital changes relative to dividends and share buybacks. Some traded lower on the Fed decision, but the sector bounced back from the early selling. Watching how this plays out going forward.

Energy – The sector bounced off the low and is testing the February highs. Despite all the bad implications XLE is making the move higher. Watch how it plays out.

Treasury Bonds – The downside pressure on bond prices remains short term. Watch and protect on the downside. Estimates are for 2.75% on the 10 year bond by year end? That is something to watch and play PST on the short side. 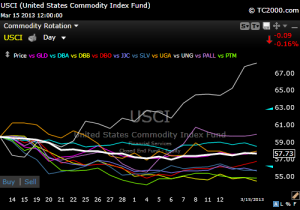