Market opens higher on mergers, IPOs, earnings, and any other positive it could point to. The seller coincidentally were pointing to the same issues as a reason to take money out of the market. Thus, the chop we have been discussing is not over despite the buyers willing to step in on what they deem a dip. In fact, the Volatility index move above 13 on the day showing the lack of calm in the markets and in the end it was the opposite of Monday which went from low to high and Tuesday went from high to low. The chart below shows the intraday five minute chart the last two days that has resulted in no gain or loss for the week. There is still plenty be watch, but little that I am willing to take risk on as this all unfolds going forward. 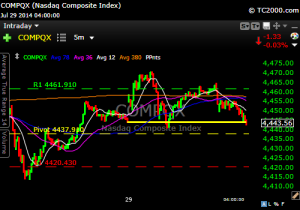 Telecom (IYZ) took the top spot on the sector list today with a gain of 3.2%. Windstream announced it was interested in spinning off all its assets into a REIT structure and then leasing them back. This would be done essentially for tax benefits, I mean to free up trapped values of the underlying assets. It will take time to get regulatory approval and thus, will likely create more volatility for the sector going forward. The volatility is likely to bring opportunities to trade the sector as well. 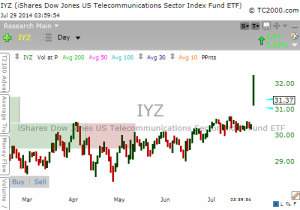 Technology became a concern last week when the semiconductors started breaking down on weakness in the semiconductors. They followed through on the test of the low Monday, but the move was not overly convincing at this point. They are still being challenged relative to the technical data, but we have to watch how they respond the balance of the week.

Homebuilders (ITB) are down 9% this month and the pending home sales Monday didn’t do the sector any favors as they test support at $27.75. Not looking good from my perspective and the weak data isn’t doing any favors. Watch for a bounce and then more selling to follow.

Small Caps (IWM) attempted to put a bounce move together today, but that failed to a make a substantial move in the sector. First course of action is to move back above the $114 mark and hold support at $112.20.

Yields on the thirty-year treasury bond continues to fall hitting 3.22% today and moving below the 3.24% support. Money continues to rotate to quality and avoid risk of all the markets. Either bonds are telling something others don’t see or this is a temporary event, the trend down in yields has been in place since the first of July. 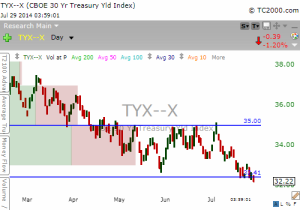 Twitter is all the buzz after-hours as earnings will be released. The consensus is on the negative side as they believe the company will continue to struggle to grow revenue and users. The bounce off the lows near $30 in May has kept the upside in play, but the consolidation pattern in play the last three weeks has been in anticipation of earnings. Being the contrarian on the stock would be worth it tonight at they beat earnings and the stock is up 20% in after-hours trading. The impact will be to the social media (SOCL) sector and technology both of which have seen a nice bounce the last week.

There is plenty of noise in the media, the analyst, the daily market moves and just about every other measure. This is a time to practice patience. Buying the dips has been working, but like all good things they eventually end. Let the move validate if upside is to continue, take what the market gives and if the downside gains momentum be willing to step in as well.

Below we look at what was leading today, what we are still watching for leadership, and the developing losers or short opportunities. The chop is still in play and that makes the short term trading opportunities tough to measure and hold. Use a disciplined strategy or cash remains a positive sector.