Looking at the intraday chart of the indexes leaves plenty of questions relative to volatility. But, in the end another day of modest progress as investors keep buying the dips. The jobs report is due tomorrow and the excuses are already being set up with Sandy taking the blame. I am sure based on the posturing the report will be a non-event. That said, we still have to watch for any potential reaction from investors.

The economic data hasn’t been enough to this point to push the markets higher and we will have to get through the 1415 range to make it work. Thus, we will remain patient, keep our eye on the outline below and let’s see how we open tomorrow.

Tuesday’s post still applies as we saw today with the intrady activity.

The index moved lower in early trading, but managed to work its way higher on the day… again. When it was all said and done the index closed up 4.7 points to 1413. The Scatter Graph below has a starting point of 11/15 which was the pivot point for the recent uptrend. As you can see at the end of the chart the sideways movement depicts the confusion from investors as well as some rotation in leadership. Materials bounced back from yesterday’s selling but remains lower. Technology got a boost from the reversal in Apple gaining 1% in trading. Still struggling off the recent highs. The balance of the sector were positive on the day with the exception of utilities.

The chart is showing rotation to financials, industrials and utlities as the leaders. Energy has made a turn off the low despite oil dropping back to $86.40. We continue to watching the jockeying for position short term, but we are still in need of a catalyst to the upside to break through resistance on the index. The market wants to move higher, but it can’t get all the parts going in the same direction.

Tomorrow is the jobs report and we will see how that plays out on the day.

VIX index has been rising and worth watching as the sideways movement looks for direction up or down? 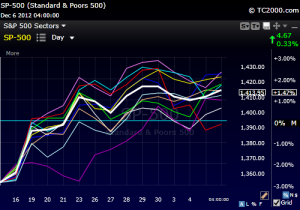 NASDAQ Index – Bounced back on the reversal in Apple today. Still lacks clarity moving forward. The constant negative talk around Apple isn’t helping, but now we watch to see how this plays out short term.

Dow Jones 30 Index – The bounce back to the 200 day moving average is a positive, but now we need to make a move above this level short term. The selling today wasn’t got our attention early, but managed to bounce back later in the day.

S&P 400 Midcap Index – The bounce off the low has now returned to the top end of the previous trading range. A break above the 1000 mark on the index would a positive and a opportunity to trade the sector. Be patient with the entry as this unfolds. Another volatile intraday trading day. Watch and manage the risk.

Dollar – The dollar sold lower and broke support at the $21.95 level on UUP. The dollar index (DXY) pulled back to support at 80 on Monday and then broke lower on Tuesday to establish the downtrend. The downside is firmly establish for now on the buck,  or is it? The bounce back to $21.95 today puts that in question. Watch to see how this plays our for now.

Euro – The euro dropped back towards the 200 day moving average. Watch for bounce off support.

Yen – FXY tested support again at $119 and bounced two days and reversed to $119 again. Not bounce for now. We will watch to see how support holds?

Treasury Bonds – Reversal short term with yields up on the 10 year to 1.58% and the 30 year to 2.78%. Watch as the yields move lower and test support short term. The drop results in a push higher in the price of the bonds, and the upside trade with it. Stocks have floundered, but the bonds are reacting as if they sold off again.

The NASDAQ Global Market Index (NQGM) broke above the 200 day moving average. However, the last two days the index has tested lower. Does not negate the pattern yet, but we have to watch how this plays out. The move was reflective of the positive push in the US and it is nothing more than a trade short term with tight stops to protect against any reversal short term.

WATCH: FXI – China gapped higher on Wednesday (passed on our trade) and held the move today. Clearning the $38.10 resistance on FXI is testing the gap higher and watch for the $36.65 level to hold as possible entry play short term. The economic challenges facing China moving forward are many, but investor are willing to look past that and believe in the trend. The PMI data was positive on Monday, but the move was lower? Watch for trade on the break from the consolidation. Gap higher on Wednesday as money rotates into the ETF.