The market is a bunch of intertwined stories that drive sectors and ultimately the broad index. Our job is to find the stories that are sustainable versus those that are news driven and speculative. This is where emotions and logic collide and in those moments are where we find some thread of truth that is worth tracking into a story line that can make money. Below are a couple of sector stories that unfolded further today and are worthy of our attention going forward to see if the opportunities follow through or complete what they have already started.

Crude oil (USO) story continued unfolding today and it is worth our attention going forward for the possible downside play in oil. Crude fell below the $93 mark on speculation demand would fall and break higher in an already stronger dollar (back at the Sept 2013 high). What prompted the speculation? “Concern about global economic conditions in China and Europe.” Some called it the post holiday sell-off following the Labor Day weekend. It is seen as the end of summer and thus, summer demand would come to an end as seen historically. But, that wasn’t the proverbial straw, it was a weaker PMI in Europe which fell to 50.7 in August. London, Germany and Italy all posted weaker data. The same was true for a weaker PMI in China as well, and there you have it, concern that demand will decline based on a weaker economic picture globally. The snowball effect offset a stronger ISM manufacturing report in the US. Crude was down to $92.75 earlier in the day and was off nearly 3% on the day. This story line has been building since the highs in June. Crude has dropped nearly 14% during that period. However, much like last week the commodity has bounced on what some have seen as improving data globally. The reality of the data points and the outlook for slower demand keeps the micro trend moving lower. This also trumps the worries and concerns about Russia and supply interruptions over the Ukraine incident. Remember a strong dollar works into this equation as well. The bigger question now… what happens going forward to the price of crude?  The chart below shows the move and the close near the support level of $34.50. This goes on our watch list. 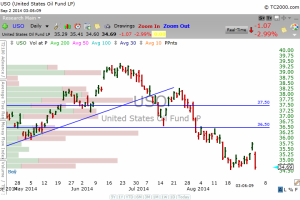 Another move of note today was the price of gold reversing again and dropping more than 1.6% on the day. Technically this keeps the down trend in play off the May and August 2013 highs. The uptrend attempt was broken on the move today as well off the January lows. Thus our conclusion from a technical perspective is a test of the $119 level on GLD and maybe a test of the $114.40 mark. Fundamentally the economy is showing continued signs of improvement and the dollar is gaining strength currently. The speculation of geopolitical issues with Russia are not enough currently to offset the fundamental reasons for gold to decline and the dollar strength isn’t helping matters. And, last but not least, demand has been falling for the metal itself over the last year. Add it all together and the outlook for gold is not pretty. Of course no one knows where it will go from here, but if the dollar remains on an upward trek against the yen and the euro, gold will struggle. This is a short term view of the commodity of course, but the longer term outlook is not even close to gaining enough clarity for me to put money to work. Short side of gold is in play and we will watch how this unfolds near term relative to the risk/reward of the short trade. 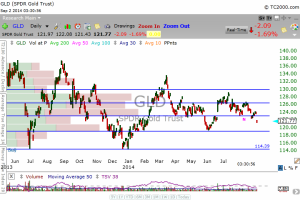 The broad market indexes continue to struggle near the current highs. The good news is they aren’t selling lower. The S&P 500 index traded down to 1994 intraday, but managed to bounce back into the close and regain the 2000 level again. On an intraday look it created a double bottom on the five minute chart and bounce back clearing the 2000 resistance hurdle in the last 15 minutes of trading. That sets it up to keep the upside in play heading into tomorrows trading. I have to remain a reluctant buyer at this point. The key is to manage your risk and watch for the stories to unfold, validate and create opportunities both short and long term.