New week… new opportunities? The S&P 500 index starts the week at a new high and looking for the catalyst higher. That said, there is plenty happening in the markets overall. If you have not done so, take fifteen minutes to listen to the weekly update video posted Friday night. It reviews all the sectors and markets and our outlook. The one event that took place last week that is a new concern is the move in yields on US Treasury bonds.

Treasury bond yields jumped last week on both the ten and thirty year bond. The later hit 3.1% as rates accelerated higher. This is not what the Fed wants to see. They are focused on keeping the cost of money low to stimulate the economy. The impact to housing and corporate spending would be seen as a big negative by investors. The Fed has nothing left to combat higher rates and that makes the concern even bigger. If the equity market smells fear from the Fed over this issue it will be a catalyst on the downside for stocks. As seen with the rumor on Wednesday concerning the Fed starting to withdraw stimulus, the markets are very sensitive to the Fed’s actions.

The yield on the ten year bond jumped to 1.9% from 1.62% over the last six trading days. That is not normal in case you are wondering. What is the cause of the run? The correct answer is yields rise when selling accelerates. The cause is generally low demand from buyers as they want higher yields on the bonds to take on the risk of ownership. The speculation is owners are dumping bonds in exchange for buying stocks. Sounds logical when you have a market that is moving higher without volatility. However the volume on the major exchanges doesn’t exactly show that to be true from my view. However, I am not here to speculate why it is happening, only to determine if it is a trend or anomaly?

A look at the chart below is the yield of the 10 year treasury bond. Starting from the low of July 2012 to current you can see the uptrending channel has been in play. In early April the trend broke lower as fear rose in the equity markets and money moved towards safety again. Since the beginning of the current run higher in stocks on April 18th the yields have tested lower until and now jumped to the upside. Why the sudden reversal in yields? The initial reversal is confidence shift in the US economy. Investors, for whatever reasons, see the second half of 2012 showing more growth in the economy. Jobs were the initial catalyst along with a continued strength in the  housing market. Thus, bonds sell, yields rise and all is well in the markets. Last week however, the spike higher in yields became a concern. The cause? Again speculation… Rate cuts around the world flooding the global markets with liquidity. Equities rally globally and bond yields rise in the US. It is another case of money rotates to where it is treated the best the fastest. 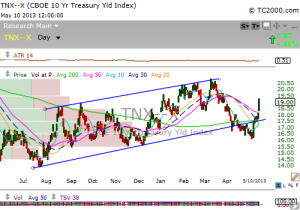 This puts the yield on the bond back into the uptrending channel, and could move up to the top near the 3% level. Will that happen? Only time will answer the question correctly and based on the chart I would expect some resistance near the 1.95% level and some consolidation to follow. The technical data on the chart shows the volatility in an asset that is generally slow and steady. But, since the 2008 financial crisis it has been anything but. We have been short the US Treasury Bond and it is time to tighten our stops. If consolidation is the result we will take our profit. If it continues higher we continue to ride the upside.

Either way this plays out, the rising yield over the last week, is signaling something on the horizon for stocks. That is an entirely different set of challenges for investors to face going forward. It is vital that you protect your portfolio position by position to address the risk of each asset. Know where your exit points are as we watch this unfold in the coming weeks.