The old adage of flea training is all I could think about during market hours today. The story goes that if you put fleas in a jar and place a lid on the jar, the fleas will learn to jump to the top just enough to avoid hitting the lid. You can then remove the lid and the fleas will not jump out of the jar even with the lid gone. The end result is trained fleas. If you look at the chart below from the December low forward we have a triangle pattern which shows consolidation in the index. This shows that investors are contemplating where the market is going looking forward. Being that the picture is clouded by all the global economic worries, economic growth in the US, earnings, oil prices, etc. uncertainty is the name of the game. The same as the fleas above were trained to stay in the jar… investors have been trained to stay within the pattern of consolidation the last five weeks. Something has to give in order for the hypnosis/training to be broken or changed. This is generally called a catalyst in market terms. To this point we have not produced one of significance, and today was no exception with move in the direction of breaking higher, but failed to hold the move as we moved towards the end of the trading day. 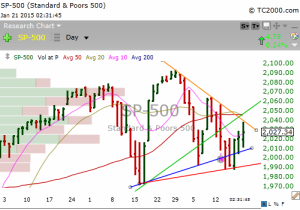 The central banks around the world are making waves similar to the Swiss National Bank last week by adjusting policies to add stimulus. It is a race to devalue currency in order to stimulate growth. As I have stated many time over, that just isn’t reality! Look at the US attempt to perform this exercise over the last five years. It wasn’t until our currency bottomed in July that we saw better GDP growth the balance of the year. If the Fed had raised rates during this period it would have been even better to the dollar and GDP. Why be confused by the facts… just keep believing the devaluation of currency is an economic stimulus for growth. Wishful thinking has worked so well historically. Which means we should not have been surprised by the Robin Hood politics presented last night in the State of the Union address. I continued to be confused as to what type of economics classes Congress, the Senate and the White House attended. Maybe that explains the Fed policy the last five years to devalue our way to virtually zero growth and call it a economic recovery… the worst by the way since the Great Depression. You cannot spend and devalue the country to growth. The fleas in Washington have been trained to stay in the jar regardless of what opportunities are presented. God forbid we break the jar, change our way of thinking and move forward with new policies and programs that gives opportunities for growth. 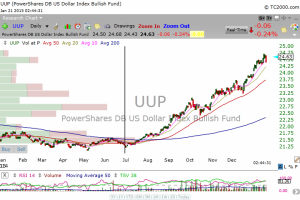 It is also important to note the drop in commodities as the dollar gained strength over the same period. The most notable drop came in crude oil which had the added effect of supply growth putting downside pressure on prices. Cheaper oil makes is less expensive to produce goods and in return acts as an economic stimulus. I don’t want to belabor this point, but with the Bank of England looking to keep rates low, the Bank of Canada cut rates a quarter of percentage point, the ECB plans to buy bonds monthly similar to the quantitative easing done in the US until October of last year, the Swiss National Bank has removed the peg to the euro and the US Federal Reserve is making comments on treasury bond yields being low due to buying from the global markets for safety. Some speculate the talk is code for we can’t raise interest rates with the current state of affairs globally. Easing is nothing more than increased money supply and there is already a glut of that in the US thanks to the Fed. If the new world stimulus finds it’s way back to the equity markets (that always seems to be the case) we may have more arguments about the bubble getting bigger as it applies to stocks in the US, but we may well see rallies in Europe and other countries as a result.

What was a boring conversation several weeks ago about the outlook for stocks, interest rates and global markets is now becoming a tangled web of who can devalue currencies and spend the fastest in the name of stimulating growth. Stay tuned as this is getting interesting as to how it all works out both short and long term. In the mean time be patient and let the chart above break higher or lower giving an indication of what direction we are heading at least on the short term side of the equation. In the meantime hopefully the leaders of the world will find reason and time to attend a sound economics class on growth versus stimulus.