Friday I got to spend time with the great people at Worden Software who created TC2000. As you know I use this for most of the research done on JimsNotes.com, and it was great to spend time talking and trading with them in the software on Friday. The best part for me was learning more about the software and participating in some live trading the developers… 🙂 I promised not to say a word… and won’t, but it does validate the challenges that come with putting money at risk in the markets regardless of what you know. I have used this software since its DOS days and watched changes and improvements at every step of the way. I will said without a doubt they are committed to producing and delivering the best product for investors and traders. The purpose of the trip was to learn better ways to scan, analyze and trade using this tool. I will say that I walked away excited about what I learned and the new things on the horizon to come future versions. Thank you Chris and everyone at Worden for giving me the opportunity and experience.

Friday was a good day to trade as the markets were able to find support at the key levels we discussed on Thursday night. The S&P 500 index, NASDAQ, DOW,  and Russell 2000 index all held key support and manage to post a positive bounce. Looking at the S&P and NASDAQ I wanted to point out the obvious pattern development from Friday. Below you can see the bottom support levels in the oval highlights. The tops are in the rectangles. The first test of support at 1992 produced a high at 2090 and the second bounce produced a high of 2062 or a lower high. The bounce Friday must eclipse the 2062 high or we will produce a lower high and give the advantage technically to the sellers on the downside. 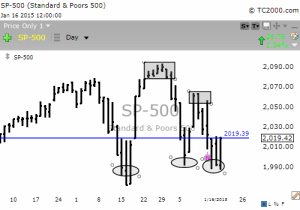 As a trade setup we would look for buy on a move above the previous high or a sell/short on a break of support at 1992. This is a conditional trade and one to follow as the indexes move forward. For options traders you can use your imagination on how to set up paired trades to capture this move in either direction. The bias is on the side of the sellers despite the bounce off support on Friday. The buyers have some convincing to do if they want to negate the shift in sentiment.

The story line for the market has not changed, but we did introduce a new player this week on the negative side… the Swiss National Bank’s unexpected move to un-peg the euro from the franc produced a 30% jump in the currency in less than 30 minutes. That move rattled investors around the world and it still a variable to contend with going forward. As if investors didn’t have enough to worry about the move added more anxiety to global markets.

Earnings were a disappointment as well to start the fourth quarter kick-off. Throw in some weaker economic data and you get a clear picture why stocks were selling Monday – Thursday. Thus, my comments above about Friday being a bounce that was nice, but the sellers still have control at least on the psychological side of the trade.

Next week promises to offer plenty to watch as the earnings announcements accelerate. Take some time over the weekend to define your risk, manage your exit points or stops, manage your profits and deal with you mindset to start the trading week. Act on what you know with discipline and take what the market gives one day at a time.