Investors remain content to buy despite the news, GDP revisions and earnings shortfall. Google missed revenue on Thursday, opened down 4% and managed to rally back throughout the day. Microsoft on the other hand missed both revenue and earnings and fell nearly 11% on Friday. The valuation for stocks are rich in reference to the fundamental data. We have revenue stalled on most earnings which is a direct result of a 1.5% GDP. You can grow sales in a flat economy. The earnings increases are coming for cutting expenses and margins are starting to shrink. Does it matter? In time the answer is absolutely. We have to play out the Fed hand currently as they commit to providing stimulus. Track the trend and take it one day at a time.

Below I evaluate the impact and outlook for each asset class and how we want to find the opportunities for putting money to work next week.

The data this week was mixed, but mostly on the positive side. Retail sales were disappointing and missed expectations. The outlook for the consumer remains challenged based on jobs, wages, rising gasoline prices and a flat leading economic indicator report. The CPI was in line, but showing a significant increase in inflation pressure at the consumer level. Gasoline got most of the blame for the increase, but there are signs of inflation picking up regardless. Housing Starts were lower than expected and higher interest rates get the blame. Has some to do with it, but the economic picture isn’t great. Empire State Index and Philly Fed Index showed solid improvement in manufacturing. Still a mixed picture with forecast for continued slow growth overall. Click on the link below for reports on the week.

Investors are focused on buying now and the future will take care of itself. There is plenty of data to digest again next week and it will have an impact (supposedly) if the numbers don’t measure up. Earnings are in play and adding to the pressure on the markets. The calendar link below will take you to the data expectations for next week.

The June 24th pivot point is where we are watching currently as the bottom has been established along with a new high. The scatter chart below shows the current leadership. The spike higher in the telecom is a result of the Leap Wireless deal with AT&T. Financials regained the lead over the Consumer Discretionary as the Sale Report for June was disappointing. Industrials have move up nicely the last two weeks as well. Energy is back on the upside as oil price have pushed above the $108 level.  Note the decline at the end of the chart in the Technology sector thanks to missed earnings on Friday. Despite the missed revenue and earnings reports buyers have still been willing to step into stocks and maintain the uptrend. I would still expect a test of the move higher short term.

The ‘V’ bottom move has been significant and the buyers are still willing to step in and believe that Bernanke and friends are not going to make any drastic changes to stimulus and all is well in the US markets. Right or wrong that is what the markets are trading on currently. Our job is to take what it gives one day at a time and then make our changes accordingly. 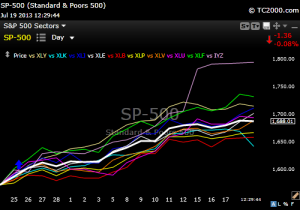 The shift back to the previous trend is worth looking at the chart off the November pivot point again as a refresher of what has taken place. 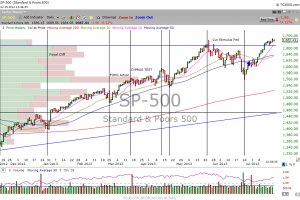 Downside Rotation: The downside short term has reversed. The move in the technology sector on Friday has put XLK and QQQ on the downside watch list.

Sideways Trend: The bounce stalled in healthcare (nice move on Friday to watch next week), Utilities (resumed some upside), Basic Material (stalled at resistance) and Real Estate (needs to get above the 50 DMA).

Upside Rotation: The bounce off the June 24th low remains in play with financials, consumer discretionary, consumer staples and industrials. They have all pushed to new highs short term and helped the broad index higher.

Updated the S&P 500 Model & Watch List to reflect the moves this week and looking into next week’s trading. We are close to being fully invested in the model and we need manage risk accordingly as the upside slows.

As seen below the dollar moved higher off the June 18th pivot point, but this week gave some back as the Fed comments towards stimulus and the markets hit the dollar. The resistance at the previous high came into play and the trend is being questioned along with Mr. Bernanke and his intent towards both interest rates and stimulus. 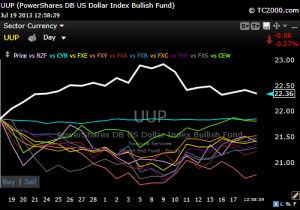 The bond market overall experienced a sell off that is a direct result of the yields rising quickly. The Fed may have finally succeeded in talking bond investors in off the ledge. The rates did calm again this week on the comments from Bernanke as he attempted to explain the Fed actions and what they mean to interest rates. The Fed doesn’t want or need higher rates currently. Willing to watch for any trade opportunities as this plays out.

Treasury Bonds – The yield on the 10 year bond found some relief again this week with a modest bounce off the low. The 30 year held its ground, but looks to bottom at the current level as the Fed talks calm to the bond market. The proof is in the yield so to speak and this is something to watch as we move forward.

Corporate Bonds – LQD = 3.8% yield. No positions currently. Bounced and hitting against resistance near $115.50?

Convertible Bonds – CWB = 3.6% yield. Bounced and made move above the $42.80 entry. Manage the move higher and raise stops to breakeven. 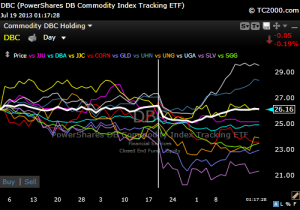 Global markets shifted from the downside on June 24th along with the US markets, but the move has been weaker than the US. EWC, EWJ and IEV are the leaders for the EAFE index. RBL and PIN have made solid moves off the July 10th low for the ETF.

The chart below shows the sideways movement in play. 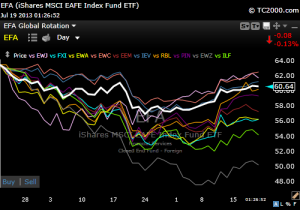