It has been awhile since the sentiment and trend have combined for a downside move that is sustainable. The drop on Wednesday caught some a little by surprise, but some were expecting the move lower, just not all at once. That has helped fill my email box with questions about what to do if the downside continues relative to specific positions as well as the infamous question, “is it too late to buy the inverse or short ETFs?” You know what I am going to say, but I will say it anyway… You make entry and exit decisions on positions before the proverbial #*^*&% hits the fan. Emotions play havoc with the decision making process and more times than not, you will make bad decisions relative to what is the best course of action if you attempt to do it in the heat of the battle. The later part of the question on buying short ETFs is what I will cover in more detail below. That said, I do want to emphasize the point that position management is a vital component of portfolio management as well as sound mental health. It takes ten minutes each night to evaluate where you are relative to the current market environment and how to manage your exit points and/or stops. It is worth the sound peace of mind to know what will happen if the market goes against your position(s). Invest the additional time.

The other issue is better addressed under the subject of trading a ‘bear’ market. Please note that I said trading and not investing. The point being that you trade the downside of a market as the cycles or trends are generally not long enough to establish investments or longer term positions. The peak to bottom move of the correction in 2007 was 17 months. Consider the uptrend starting in March 2009 went on for 67 months. Studies show that the average uptrend last nearly three times longer than the downtrend. Armed with those stats, trading is the best approach to down market cycles. With that in mind let’s discuss a simple approach to trading in the downside or sellers market. 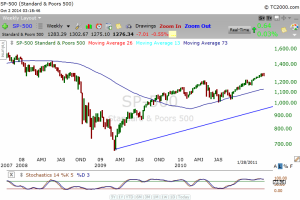 The first ground rule I apply to this strategy is let the selling trend lower for at least ten trading days or so before taking any trades or action. You want to see a rise in volume on the selling and lower volume on the buying which is an indicator that the sellers are gaining control of the direction short term. Second, and from my view most importantly AVOID GREED! This is a challenge for traders on the downside moves. Why would there be more greed on short trades than long trades? The speed by which the downside accelerates when the ceremonial towel is thrown in by those wanting out of the market at whatever cost. In September 2008 the S&P 500 index dropped 35% in five weeks (see above chart) as investors stampeded for the exits. It is also important to note that for nearly twelve months prior to that move the index had been in a steady downtrend that had dropped just 17%. Speed kills, but it also creates the visions of getting rich quickly. Greed is not a word you want to describe your strategy for trading a downside move in the markets.

Armed with the knowledge that the downside moves faster than upside we should take the approach of establishing our short positions in the rallies or bounces off support versus trading the sharp downside trading days. This gives you a calmer approach to entering your trades and your probability of getting the price you want are better. Having said that, it is important to understand human psychology. The price of the market is moving higher and you want to sell… that goes against what we normally due relative to establishing positions in our portfolio. Thus, we are swimming up stream on that approach. It doesn’t ‘feel’ right. There in lies the challenge with short trades to start with, we are going against the psychology of nearly all market strategies. My recommendation is to practice your strategy with smaller size positions and get used to the exercise before attempting to commit larger sums of money on short trades. Short the rallies is the phrase I use to keep my mind focused on what I am attempting to do. Another reason to short the rallies for your entries is to attain better entries. The difference will help you mentally and financially when the market does attempt or is successful at reversing or bouncing off support. Those initial moves higher are equally as sharp as the selling and that will squeeze your profits on the trades. Thus, practice selling into the rally to give you better entry points and less risk on the trades.

There are two key points that I have to remember as I approach establishing short positions. First, don’t short into support zones and second, stop management is a must. Below is a chart of the S&P 500 index currently. As you can see the set up for the downside has been building since early September following a ‘V’ bottom reversal in August. On the break of support at 1978 on the 23rd of September we got a short signal. Note that it was followed by a rally or rebound day… short into the rally remember… thus a buy of SH on that day would have given you and entry at $22.80. The selling continued as time progressed forward and you would still be in the short position with your stop now at break-even or $22.80. As you can see when you have a defined strategy for how to approach trading a ‘bear’ market you can define how to get into the trade, how to manage the risk of the trade, and have less anxiety in establishing a short position prior to the bigger drop on October 1st. Trying to short the positions into the selling on the 1st of October would have cause too much anxiety or stress for the trade. With some planning we can eliminate some of the stress and anxiety. 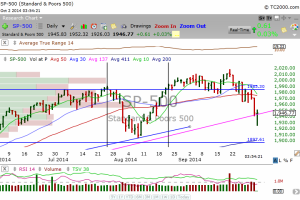 Putting this all together… we allow the downside move to establish itself with roughly 21 days of drifting lower on higher volume selling days. We avoid greed by establishing a support level we wanted to break or violate to establish the short entry. We focus on establishing our entry on a rally or bounce and then focus on managing our risk/stops. This approach takes patience to let the trades develop first and foremost and then it takes discipline to manage both your entry point and exit point. Last, but not least this is a simple approach and not one that involves complex strategies and variables that will create paralysis of analysis. 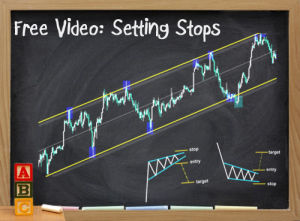 If you have not signed up to receive my Notes (Jim’s Notes) on markets and trading strategies be sure to do so now, after all it’s free. I know you hate to give out your email and get spammed to death. We promise to only provide you with content that is both educational and executable. If you don’t like you can always unsubscribe and we promise to not bother you any further. Simple money management is goal!