As we finish another day of misdirection I wanted to cover some charts of interest going forward. The selling on Monday was followed up with buying on Tuesday which is why I am calling this misdirection. Emotions are running high relative to the price of crude oil and the potential impact the sector and globally as prices fell to a low $63 last week. The renewed selling today sounded some alarms, but we saw XLE climb 1% and the S&P 500 index gain 0.6%… maybe, everyone is adjusting to the price after several days of media blitz on the good, the bad and the ugly of the situation. Not convinced that is true, but we will continue to watch and let this play out.

First chart of note… Russia! Why Russia? Look at the chart below and you will see the accelerated selling as oil has continued to decline. The impact to the country is significant as the majority of their GDP is oil and natural gas. Some are asking when will Russia bounce? Good question… when will oil prices rise back to the $100 level? Somewhere in-between is the answer. 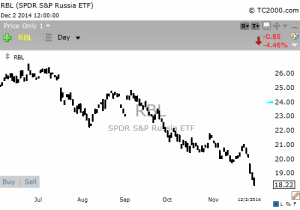 Next is natural gas. As you can see the chart of UNG has been very volatile of late. The rise came as a result of weather related issues increasing demand. Thus, prices started to rise. The test of the move has come as a result of production increases in the US outpacing demand. Then we throw in the crude oil issue on top… sellers are back push the price down. A test of the previous low at $19 is the level to watch moving forward. 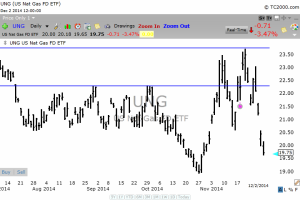 Next up is China. The chart of FXI shows the volatility in the country ETF the last couple of weeks. The selling has been a result of economic data showing poor performance and outlook. The positive comes on speculation that the bottom is in and the selling is an opportunity. Jury is still out, but the trend is higher off the October lows, albeit a volatile move to the upside. 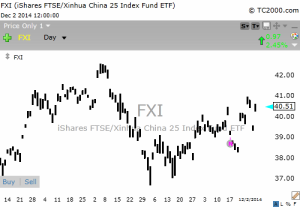 Last, but not least the reversal of selling in the biotech sector on Tuesday put the ETF at a new high! Go figure, what is trash one day is a diamond the next. The key is the longer term uptrend that is still in play and has maintained the break above resistance at the $298 mark. 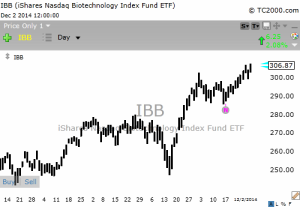 The goal is to remain disciplined and let this all unfold one day at a time. For now the nerves are in the way and the broad direction is being challenged by news that is creating uncertainty. As this settles and the micro trend defined, you add to your positions. If the downside becomes defined we take our exits and wait patiently for the next opportunity.

Markets fight back from a negative start

The broad indexes faced more selling to start the day. A look at the intraday chart shows a dip of [...]