The third quarter is officially in the books and data will be forth coming, and it will set the tone for the balance of the year. Tonight we are going to take a moment to look at the major indexes and what transpired over the trailing quarter. The first chart below is the S&P 500 index which closed at 1960 on June 30th to start the current quarter and we closed at 1972 or a 12 point gain for the last ninety days. That equates to a 0.6% gain. For all of those who believe the quarter has been good for stocks this is a sobering chart… the good news is it isn’t negative for the quarter. To put this in perspective the VIX index was at 11.2 to start the quarter spiked to 17.2 in August and back to 11.2 in late August and closed today at 16.1. Yes, there is worry and it remains alive and well and you can see the up and down movement in the price of the S&P 500 index. What does the fourth quarter hold for the index? That will depend on some key sectors going forward. The Consumer Services (XLY) is one to watch as the retail sector is hitting its peak season with the holidays. Prognostications and estimates will be flowing and expectations have already been revised lower. If the consumer comes through it will go a long way in helping the upside for the broad index. Technology (XLK), Healthcare (XLV) and Financials (XLF) are the others on my watch list. Each will play an important role and with earning starting in the next couple of weeks we won’t have to wait long for financials to report and along with technology. Both will give solid insight in the outlook for the fourth quarter and expectations from investors. 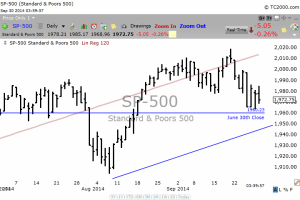 The NASDAQ composite index showed a better net result, but the volatility was just as noticeable for the index. We ended the quarter at 4493 and started at 4407 or a 86 point gain for the period which is a 1.9% return. Not stellar, but much better than the S&P 500 index. The biotech stocks were the biggest contributor up six percent for the broad index as technology stocks overall were flat. This is the bigger question mark heading into the final quarter. Breaking down the parts of the index we don’t see much in the last four weeks that has been positive. The chart below shows the weakness currently. The last quarter tends to be one of the strongest as end of the year business spending contributes to the revenue growth. That said, the business spending has not been rising as much as many had hoped and it could lag expectations. Thus, we watch to see how this unfolds and if the buyers will step in and push the index to resume the uptrend that is still in play longer term. 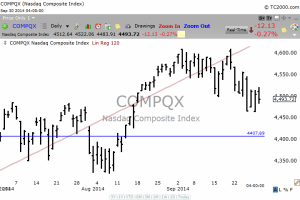 The Russell 2000 Small Cap index was the weakest link for the quarter starting at 1192 and close at 1102 or a decline of 90 points. The 7.6% decline was one of the worst among the indexes we track. Tuesday the drop of nearly 16 point broke the 1110 support we were looking to hold. 1090 is the next level to watch on the downside, but it could have broader implications for the markets. Investors continue to shed growth in favor of dividend and large cap stocks. Short term exit points were established on the break of the 1150 mark and the long term uptrend line was broken. The 1090 level is key as a break would be a break of the trading range the index has been in since Feb-Mar period. This sector/index holds the largest risk going into the fourth quarter from my view. 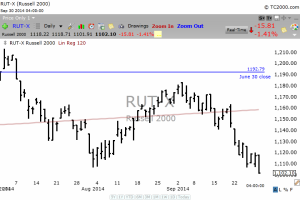 The most interesting chart for the quarter is the Commodity Index (DBC). Starting the quarter at $26.58 and closing at $23.22 or a drop of $3.36. That puts the drop at 12.6% for the period. There were no sacred cows in this sector as crude oil fell 11.5%, natural gas dropped 10.1%, gold was off 9.2%, silver fell 19.2%, copper down 7.1% and agriculture as a sector was off 7%. The strong dollar gets some of the blame, but the lack of demand can take the brunt of the responsibility. That shows the lack of global growth and consumption as well. The bigger question is are we at the bottom? That is not likely if the dollar remains strong and the global worries relative to growth continues. For now we are willing to watch and see how this unfolds. If the optimism rises in the sector it would be worth adding positions, but for now the only trade is short. 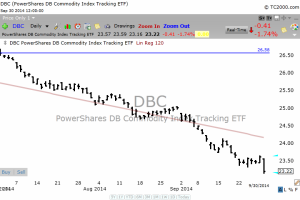 The best course of action is to let this all unfold and take what the market gives. October is likely to be equal if not worse in volatility for the markets overall and that could and should offer some opportunities as it all unfolds. Thus, our famous words of wisdom… remain patient and let the speculation subside and the trends become defined. Take it one day at a time.