The broad market continues to search for a catalyst to define the short term direction. The economic data has not been the answer, Spain continues be a drag on investors sentiment and earnings are just around the corner with a negative outlook. If we didn’t have money flowing from the stimulus around the world the downside would be in play. Thus, what real catalyst can there be at this point?  Most of the artificial stimulus has been put on the table and that leaves growth as the potential catalyst. If earnings, revenue or some other measure of growth can be forecast in a believable manner looking forwad, it would be the key or catalyst to extend the uptrend. But, then again, if the tooth-fairy was real we would have had a lot more money when we were kids.

The results of our scans from last night are covered below:

The NASDAQ 100 index remains challenged by what is happening to the largest of the large cap stocks. Apple fell from the high $16 in trading intraday and then recovery $11 into the close to hold support at the $660 level. The stock has struggled as iPhone sales were weaker than some projections. The index showed a similar trek throughout Tuesday for Amazon, Microsoft, Intel and others. These stocks  have been struggling since the high was hit and set on September 13th. Using that date, you can see on the chart below that with the exception of Google the other nine largest stocks in the index either matched the index overall or underperformed the index. This is the challenge the sector faces currently and something to watch going forward. The old adage that a picture is worth a thousand words definitely applies here. 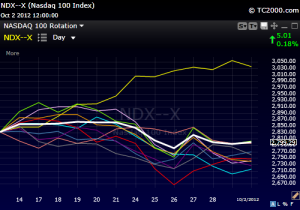 Despite the under-performance since the QE3 announcement from the Fed, you can’t assume anything, but the downside plays on the NASDAQ 100 index are starting to look attractive as a short term trade.

Financials are still in play, but they are not loved. The headlines and attacks on the banks are relentless. The new attack by the the New York Attorney Generals office against JP Morgan for mortgage bonds sold by Bear Sterns, is the latest attempt to brutalize the banks. It is yet another ‘investigation club’ set up by the White House to attack the banks. There is no doubt the banks did there share of wrong, and they have paid dearly for those transgressions. However, it isn’t enough for some as they continue to be attacked. Despite all of that the banks are still on my watch list of opportunities moving forward. The stimulus from the Fed in the form of quantitative easing is a profit center for the banks. The size and timeline of the stimulus plays into the hands of the banks, and if they focus they  stand to benefit nicely from the move. Scanning the sector we find many of the trends are intact and the upside is still worthy of playing on the current test of support.

Commodities have become an interesting group overall. Breaking it down into three major components helps get a clearer picture of what is moving and what isn’t. Energy has been a love-hate relationship with crude oil. After jumping to $100 per barrel the price recently tested $90 as support and held. Thus, what about oil? The uptrend off the July lows was broke as oil tumbled back towards support, and the last two weeks has been trading sideways. I dont’ see that changing unless the dollar sells off further. Still worth keeping on a watch list short term. The downside plays have been leading over the last two weeks, but before you jump on the downside plays watch the short term outcome on price.

Natural gas has been the big winner of late with UNG jumping 18.3% over the last two weeks. The stocks have not responded in kind which leaves the commodity to drop and bring unity to the pricing, or the stocks have to rise and create unity to prices. Either way there is going to be opportunity.

Agriculture is struggling after a big run higher from the drought. DBA found support near the $29 level and bounced last week. Is there more upside? Good question, and the charts will tell as we go forward. The fertilizer stock Mosaic disappointed on earnings on Tuesday and kept MOO from moving higher. The sector is consolidating and on our watch list, but not much in the way of interest currently.

Metals have been in the headlines as gold and silver have moved up nicely. The current consolidation is part of the process to watch. Be patient and let the trend tell you what is going happen along with the fundamental data. The mining stocks have moved in unison with the metals which is a positive from our view for both looking forward.

The base metals were equally impressive on the jump higher, but has been consolidating the gains for the last three weeks. Copper and nickel were both leaders on the bounce for the metals, but like the others are consolidating near the recent highs. The mining stocks have lagged and XME is testing the small bump higher in September at support near $43. The stocks and the commodities continue higher, but first the direction short term has to be resolved.

As you can see, there are plenty of opportunities to watch and track. The challenge is direction or a catalyst needs to be defined. One day at a time is all we can do for now. Stay focused and be disciplined.