Thursday was a busy day for news, but the reaction by investors was not equal to the events. Breaking the news down to good news and bad news we see equal response to both. As we end the week with even more data relative to jobs, I wanted to look at the key data points and the sector or market reactions to gain a perspective looking forward.

Rate cuts from both the ECB and China. The cut from Europe was fully expected, while the cut from China was a surprise. The reaction from both markets was a big yawn. Looking at the chart of IEV, iShares Europe ETF we see the run up prior to the announcement from the Summit Meeting last week. Thus, this was more of a buy on the news and wait. The resistance is obvious when looking at the chart and the momentum is falling since the gap higher. To gain our interest we would first need a break above the $34.30 level on volume and the $35.10 level is just overhead for more resistance. Throw in the negative outlook for growth in Europe and this presents a big challenge going forward. Breaking Europe down further by country the picture is similar. I am still not a buyer or a believer in owning Europe. If technically the chart breaks higher it would be a trade and nothing more at this point. 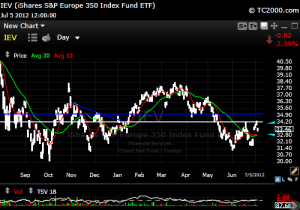 China was the other rate cut and the charts looks similar relative to a bounce off the lows and plenty of resistance overhead. We covered FXI, iShares FTSE China 25 ETF in yesterday’s notes. No real changes from the post, but I do think it is worth tracking and watching China for a trading opportunity short term. We have added it to the Watch List. The response to the rate cut was nothing on Thursday, but we will continue to monitor how it plays out.

Jobs reports from ADP, Challenger and Jobless Claims were good. But, will they change today’s Jobs Report for June? The number has been lowered to the point if it is bad, it will be bad for stocks. Even it the number comes in near the 120k mark if will be a nonevent for the market overall. The jobs data helped off set the negative ISM Services number. The 52.1% reported was positive in that it still shows expansion, unlike the manufacturing number on Monday. The two sets of data created a draw for the market which fell slightly on the day. The key is looking forward… Unfortunately that isn’t getting any better. If anything the trend since January has been lower. Thus, the charts showing the March through June decline. The current bounce off the June lows are all about stimulus! Investors are looking for the Federal Reserve to offer QE3 or some other form of free money to prop up the markets yet again. If we don’t get it soon the reaction will be negative and the recent gains erased.

Retail sales were the other data point of interest on Thursday and ….. yes, they were disappointing at 0.1% growth. That was the worst number in three years. This follows the progression of other economic data over the last quarter. A look at the chart of XRT, SPDR Retail ETF below shows the sideways movement since the March high for the sector. The bounce of the low has been a by product of the recent rally in stocks. The data isn’t improving, but the chart is? If anything this is a stock pickers sector. You simply have to compare a chart of WMT and JCP to get a clear picture of what is taking place in the sector overall. The consumer confidence is falling and that doesn’t help retail. Take the time to dig into the sector to find the winners if you have an interest in owning the sector. 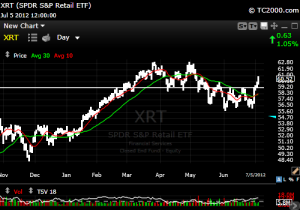 The bottom line is simple… the data is declining and stocks are rising? The reason for the rise is stimulus. If the Fed doesn’t provide what the market (i.e. investors) are looking for the buyers will step to the side and the sellers will resume control of the direction. Thus, all the positive talk about market growth is really dependent on the data improving, which at this point is believed to need stimulus from the Fed. Thus, all the bad news has been seen as good news, because if will cause the Fed to act sooner rather than later. Stocks have rallied on the hope of this Fed action and you can only imagine how it will react if it doesn’t get it.

Take what the market gives, but be very mindful of your surroundings and protect your downside risk.