The consumer story continues to unfold despite the doom-and-gloom of many analyst. I again go back to my premise of this current market environment, people are engaged in the ‘now’, not the later ‘potential events’. If you stop and reflect on the last three to four years of the issues that have kept investors away from the markets… Europe, banks, Washington DC (i.e. government), housing, jobs, etc. etc. etc. The list of issues on the horizon have been many, and it has been a long and winding road. But, now there is some light at the end of the tunnel, (hopefully not a train) and investors, like consumers, are willing to focus on the now and let tomorrow take care of itself.

The February sales report showed an increase of 1.1% in spending versus the 0.7% expected. That was  a positive from my perspective. Remember payroll taxes went up in January, and gas prices have jumped nearly 15%. Both impact spendable or discretionary income from the consumer. It was expected to cut into the results for February… it didn’t. What does that mean? The simple conclusion is we all have had a hard time accepting that things are getting better. Not great, but better. That lends itself to confidence and that leads to spending. Gas prices have declined roughly 5%, home prices are “rising”, and stocks are hitting new highs. All reasons for consumer confidence. When you have looked a dead end economy in the eyes… things look much better now. And as my father always said, but on the other hand… there is a long way to go.

The interesting response to the data was a flat market. The initial gains were quickly erased and the balance of the day was spent determining direction. If we look at the chart of XLY, SPDR Consumer Discretionary ETF was up 0.5% and XLP, SPDR Consumer Staples ETF gained only 0.2%. Does that mean the good news was already priced into the markets? Not likely as XRT, SPDR Retail ETF gained 1.3% on the day showing the sector was the leader on the day. 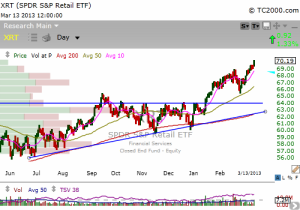 Digging into the ETF we find the leadership on the day was mixed across the various sub-sectors and supported the idea that it remains a stock picking sector. Walgreen’s, Best Buy, Pac-Sun and Kohl’s were some of the leaders in the move of late. Each stock represents a different demographic within the retail sector. XRT has made a solid move off the February lows and remains in an accelerated move higher. The consumer is alive and well.

As I stated in my post on March 11th, grocery stores remains one of the primary leaders in the sector as the sector gained 1.6% on Wednesday. The sub-sector has its defined leadership as well. PBJ is the ETF that holds those stocks along with other specialty consumer products. Media is another leading component of the broad sector. Scanning the industry groups within the Consumer sector you see very defined leadership as well as stock specific leadership. SuperValu in the Grocery sector for example has gained nearly 10% over the last three weeks after breaking above the trading range.

This remains a sector to filter down into the parts and the parts to the stocks that are leading. It takes more work to research, but the rewards have been worth the extra digging. Watch for the sector to continue to provide leadership in the current uptrend. If the correction or pullback that is being promised in the media takes place, this is a sector to watch for opportunity.