I am not personally one who follows or reads much from Carl Ichan, but today he made a move that helped us make money, and I wanted to say, thank you! In the morning trading notes today we recommended taking a position in the October 470 calls on Apple. No, I did not get a call from Carl or his offices. What I did get was a buy signal from the bounce off the June lows that moved back towards the top of the current trading range. The break above $465 last week was a positive, but the move tested lower and held support at the $454 mark on Friday’s close. Monday the stock pushed back above $465 and we stated this morning if it held the move to establish a position in the stock using the call options, and that is what we did this morning.

Today, media sources reported that Carl Ichan touted a large position in Apple and stating the stock was undervalued. (a term I personally love! and have no idea what it means relative to investing.) The term must mean in his opinion the stock is cheap based on what he deems the true value to be. Thus, one man’s opinion determines what a stock is worth! I am of course be a smart ass, but the reality is it did push the stock higher along with the reports, that Apple, is going to launch a new iPhone in September (more speculation) and it has the stock moving higher. Currently the stock is at $490 and the $470 call option is up $12 from the entry at $18. That leads me to the issue at hand… managing the risk of the move higher.

The key to sound money management is good risk management and the target on the trade was $25 and that is where we would position our stop for now. We will do more evaluation tonight and post further updates in the Trading Notes in the morning. 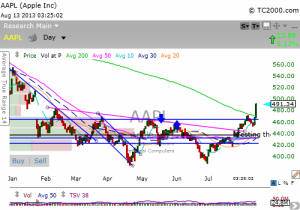