I have always looked at trends as something that will eventually break. This keeps me from being overly optimistic about what is happening in the markets if the trend is up, or overly pessimistic if the trend is down. Trends are developed over a period of time by connecting a sequence of higher lows to create a rising trendline. It is assumed at some point in time the stock or index being charted will eventually correct in the case of an uptrend and the price bar would violate or break below the existing trendline. What that means is subject to interpretation by the analyst or technician. The one key variable in the answer would be the timeline assigned to the trendline that is broke by price. Like anything relative to the financial markets, the longer the time period under review the more meaningful the prognostication of meaning or outcome. Broken trendlines do garner the attention of the investment community and each will assign their own interpretation relative to the next stage or opportunity relative to the trend broken. The time interval of the trendline will add to the significance of the break and in turn will assign how the analyst or trader will act upon the event.

The chart below of Facebook shows an intermediate time frame (9-18 months) uptrend starting in August 2013 through the end of the chart or about 12 months. There are two additional short term (3-9 months) trends of roughly four months each. Both of those trendline were broken, but the longer term trendline remained intact. Thus in this scenario the short term trendlines were only significant to a short term time horizon. You can see how a short term strategy might well have been to sell on the break of the short term trendline and to buy the stock back when it confirmed a bounced off the longer term trendline. Or, simply hold and add to your position based on the intermediate term trendline holding support. Again the trading strategy is subject to interpretation by the analyst or trader. Thus, you see the importance of determining your strategy relative to trendlines before trading in reference to the trendlines. Too often traders make the mistake of trading the trendline after the fact. In other words, they already own a position and will use the trendline as indicator to add or sell after the fact. This is problematic if you did not use the trendline in the initial strategy of purchasing the position. Why? You are changing strategies midstream. In buying a position you should first determine the strategy used to own the position. Part of any strategy is the entry (buy point), exit (stop in the event the strategy fails), and target (profit point for the position taken). Trendlines are a strategy unto themselves or part of a strategy, not a afterthought. In the case of Facebook below it was a part of the strategy from the beginning. 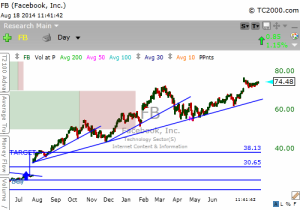 In looking at trendlines it is equally important to remain open minded about the future of what will or will not transpire. If you look at the chart of Facebook above the break of the trendline in late October formed a higher low in November, which bounced and continued higher forming a new trendline with a lower degree of trajectory. That new trendline is still in play and is providing a line of support at each point the stock has tested, sold or pulled back. Thus, what didn’t work in the first trend did work in the second trend and provided a great support point for trading or holding the stock.

1)  The length of the line. The longer the line has held the more significance given the trendline relative to the position. This is key in holding long term positions. Weekly or monthly charts will create long term trendlines. An example currently is the monthly chart of the S&P 500 index which has been in place since the low of 2009. If you want to hold long term positions you need to look at long term charts. Sound obvious, but you would be surprised how many investors become short sighted on long term positions. It takes a patient investor to deal well with long term investment and with the mindset of many individuals being short term makes for a difficult match to hold long term investments.

2)  The angle of the line. The flatter the line the more the significance of the trendline. As the old saying goes, what goes up, must come down… applies to stock charts. The faster or steeper the angle of ascent the greater the probability of a equally quick decent. Historically the more gentle the slope of the trendline the truer the trend. As in anything that is not always the case, but it is a good guideline. I like to look at it in terms of risk management. A steep trendline should be managed more closely than a gradual slope trendline as the risk of the position rises more rapidly creating greater emotions to be managed relative to the position.

3) The number of touches or tests of a trendline the more significance assigned to the line. As seen in the chart above of Facebook there are four to six points making up the trend and it has validated the strength of the trendline during the period. Thus, if the price moves back towards the line a test would be given greater significance.

There is much to learn in the use of trendlines relative to trading strategies. It is important to start with the basics and find what works best with your style of trading or investing. Determine your time horizon, your risk tolerance or ability to handle volatility, your level of, or ability to apply patience during highly emotional trading periods, and your ability to remain disciplined and stick with your strategy. Investing is a combination of science, emotions and psychology that build good investors over time, and trendlines help in all three areas of application.