The downside continues as investors head for the exits ahead of earnings. Technology which has been the weakest component of the market led the way lower. There is plenty of blame to go around, but the weakness has been building along with the momentum to sell stocks. After hours Alcoa set the tone well with a third quarter loss. Even so, they beat expectations and was trading positive after hours. Not much in the way of an indicator looking forward, but it is likely to set the early tone for investors.

Oil rallied three percent as buyers step up on the news stimulus news from China. The hope is that demand will rise as China attempts to restart the growth that has been declining as they attempted to fight inflation. There were concerns about Syria and Turkey spreading throughout the Middle East adding to the pressure on crude prices. In my notes this morning I discussed the downside pressure on oil picking up. Change that to outside events picking up and oil prices rising. Still have to watch the speculation short term the demand doesn’t exist currently, it is only speculated to grow. The downside is still my view going forward.

Treasury yields on the decline again? The shift lower as the worry about the outlook for growth gains support. The news is full of reasons the economic picture is bad both short and longer term, and it is gaining traction. The fear factor kicks in and the money starts to move towards Treasury bonds again. Watching TLT and IEF here for indications of a transition. Not seeing it yet as the downtrend remains in play for TLT off the July high.

The witch hunt has shifted to Wells Fargo as another lawsuit is filed by the New York Attorney General. This is the same as one filed against JP Morgan last week. Amazing how we can not leave this issue alone. The regulators have yet to take one ounce of blame for any of the issues resulting in the lending practices for mortgages. This is the same rationale used in the Madoff case. This cancer will spread further and the banks will become toxic investments until some clarity is gained. Banks were off more than 1% on the day.

Overall it was a challenging day for the markets, but the damage was limited. There is still plenty of work to do and worries to conquer for investors and their confidence, not to mention we start earnings reports tomorrow.

What am I watching for Wednesday?

Treasury Bonds – TLT bounced off support at the $120.75 mark. If the momentum builds we will look to add a position.

China gapped higher on the stimulus news. The bounce failed to hold up close basically flat on the day. FXP is the short China ETF and a break above $24.85 would be a positive short term for the directional play.

Retail – XRT – Lost 1.75% on the day and reversed the bounce off support near the $62 mark. Does the momentum remains weak short term. watching the downside risk.

Crude Oil – OIL – Stopped out of our short play — watch the volatility, do we sell lower tomorrow?

Energy – XLE – If crude drives higher what happens to stocks? Watch for the upside short term.

S&P 500 Sectors-to-Watch – The index picked up selling momentum on Tuesday.   Today we took another step towards testing the September 26th low. The good news is we remain above the 1430 support for now. The wedge pattern consolidation was the pattern to watch and the index broke to the upside on the positive move last week in the index. If we test the previous support we have some more selling on the horizon.

The Scatter Graph below is run from a starting point of the high on 9/13 following the FOMC meeting to provide stimulus and the markets rallied. As you can see we drifted lower from the highs, but the ten sectors of the index have scattered. The leaders had been the defensive sectors with Healthcare, Telecom, Consumer Staples and Consumer Services outperforming the index, but the shift in direction on Tuesday is worth watching on how this plays our short term. 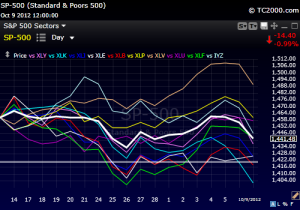 Financials – Bounced off support at $15.45 and moved higher. We held support and took the entry on the upside to lead the broad markets. Monitoring our stops we held support at $15.95 and we will watch how this holds up short term. The lawsuits from New York aren’t helping matter.  Focus, raise your stops and manage your risk.

Energy –  The sector was basically flat on Monday and Tuesday. Watching the price of crude move up and down isn’t helping the directional factor for the stocks. Maintain your stops and let’s see what happens short term.

Telecom – Added the play back on Friday as the sector remained in a positive uptrend. Some testing on Monday and some selling on Tuesday has put the negative sentiment in play in the sector. Watch and manage the stop.

Healthcare – The sector has pushed gradually higheir, but there is some more testing the move higher. IHF hit at new high last week and is testing as well breaking the 10 day moving average. Pharma is still struggling and XPH is at key support near $59. Hold positions and manage the stops.

NASDAQ Index – The index has been under pressure from the large cap technology stocks selling. Apple is putting downside pressure on the index short term. Let the test play out and then look for entry point if the upside resumes.

Transportation Index – The transports bounced off support last week at the $86.75 mark on IYT. They were chugging along nicely until the selling on Wednesday impacted the outlook short term. We hit our stop on the EGG position on Monday and we continued lower today. The indication for the economic picture aren’t good if the setor remains in downward trek.

Dollar – The dollar, like stocks, is being pushed up and down based on the daily sentiment towards Europe and the global economic picture. The downside pressure on the dollar has met support currently and any hope of the dollar rising is tied to Europe continue to provide a fear factor. We got the bounce off support and UUP is hitting against resistance at the $21.92 mark. The move above that level today is worthy of watching.

Treasury Bonds -The upside for the bonds are in focus as the markets reach a point of uncertainty. Looking for money to rotate back into bonds if the risk is rising. Manage the short play on bonds with TBF and see how this unfold going forward. If the fear factor rises exit the position.

4)  Commodities: Gold was holding near the highs, but the talk about selling is worthy watching short term. $170.25 is support for GLD. Oil was up on the day by 3% on speculation.

WATCH: DBB – Entry – $20.10 Tested lower again versus upside. The break is sitting on support at $19.45 for now. Watch the short play if this break support again. Base metals were lower and the Agriculture commodities moved higher. Mixed bag for the sector overall. Watch and adjust your stops accordingly.

WATCH: OIL – Broke below $90 again and we entered a short play with DTO.

5)  Global Markets: The global markets bounced last week off the low at $53 on EFA. Direction is still a big question short term as the ETF sold back to support on Tuesday. Break of support brings the short trades into play.

WATHC: REM – Entry $15.20 – Shift in sentiment within the sector over Hybrid Mortgage REITs versus Agency REITs. Thus weakness is hitting the latter like Annaly (NLY). Dividend is 10.2% currently for REM. Broke support at $15 on Tuesday watch as the downside is gaining momentum.