The markets are stuck in neutral and looking for a good mechanic to fix the transmission to go forward… we are stuck in nuetral. The the broad indexes open higher only to retreat back to even, before a modest rally into the close. Didn’t want the headlines to state that it was six days in a row on the downside and extending the losing streak. You can see the issue of the consolidation or selling in two ways… first, the market is ‘oversold’ and it is time for a bounce higher to restore to move higher. The media and analyst are hanging on that with fist tightly clinched. The second, this is the longest losing streak because the broad market is tired and ready for a downside move to balance thing out short term. Either way nothing was decided today and we will have to be patient and let the short term digestion determine the ultimate direction.

The leaders are still struggling and the outlook is still unclear thus, the stalemate relative to direction. 1682 is the level I am looking to hold on the S&P 500 index. The NASDAQ posted a move higher follow two inside trading day and held above the 10 DMA which is positive for the index going forward. The Dow broke support at 15,330 on Wednesday and Thursday and moved back to that very level to test the break. Still the one index to watch on the downside relative to leadership. We are still in a mode of patience currently and willing to let this unfold a little further and provide some clues on the direction short term.

Stock of the Day: Facebook (FB)
The headlines are loving the fact the stock has clear the $50 level. Upgrades from many, good news about everything and analyst like investors are becoming infatuated with the stock. The hype is starting to worry me as a shareholder, and that worry will turn to protecting gains at some point, and I will not be alone in that thinking going forward. Thus, watch what is happening with the stock short term and manage the positions accordingly.  In doing so it is important to remember why you bought the stocks, understand the future of the position as it relates to the future business environment and make your decisions accordingly.

Best Headline: “Boehner: Debt Ceiling Can’t Rise Unless Spending Falls.”
While I would like to believe that statement is true, it has been raised more times than most can count without any significant cuts in spending. Thus the issues that face investors going forward… the threat of a government shut down and a default on payment of the interest on our debt. Will it happen? No one knows, but the fact that it is discussed and the deadlines get closer worries the markets, and that worry turns to selling if the markets react enough to the speculation and rumors. I think most people would like to see spending cuts to allow a balanced budget to pass. But, that would call for rational discussions and that is wishful thinking.

Short Trade of the Day: Hertz (HTZ)
The stock drove off a cliff? Maybe that should be the best headline. The stock did decline 16% today on lower guidance for the full fiscal year. They cited lower volume in their domestic brand at airports. The stock has almost tripled over the last year from $9.50 to a high of $27.50. The price closed below the 200 DMA and could offer a short opportunity after some of the dust settles. Avis was down 6.8% as well following the announcement. CAR is in a confirmed downtrend and testing key support at the $27 level as well as the 200 DMA. The downside is building in the sector as a result of the news.  See CZR as example of bad news pushing the stock lower following the initial news is released.

Economic Data:
More mixed economic data with the weekly jobless claims continuing to move lower at 305,000 new claims. GDP revisions were none. 2.5% for Q2 growth remains the report for now. Old news, but watch how it impacts the Q3 revisions if any as a result. Pending home sales fell 1.6% and lower than July’s 1.4% decline. The consumer is up tomorrow with income, spending, price index and Michigan consumer sentiment index. We still are not getting any catalyst or help short term from the data.

Chart of the Day: iShares Software Index ETF (IGV)
The Software sector has been one of the leaders for technology. The ETF is up 16.2% since the low in June and despite the recent volatility in the sector, it still trades well above the 50 DMA. Stocks like ZNGA, CRM, TIBX and ADBE have been key in pushing the sector higher. The test of support on Wednesday near the $76 mark has held and the upside has now moved back above the 10 DMA and continues to show a positive long term trend. 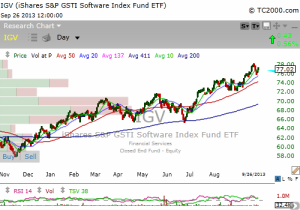 Choppy Markets Require Patience
The market have been testing lower for the last week and that should put us on guard relative to our short term or trade positions. If the selling accelerates further on the downside we have to manage all our positions relative to the longer term market outlook. Due to the lack of clarity in the markets currently it is causing or creating a choppy trading environment. That is where we have to exercise discipline and sit it out if necessary. There are no trading rules that state we always have to be trading. Sometimes the best trade is not trade. As this market sorts through the direction it wants to go, be patient and let the trend develop short term.