Opposite trading day from Monday as the Ms. Yellen set the tone for the market in her testimony to Congress. Thankfully this only happen twice a year! The best quote of the session today was, “Valuation metrics in some sectors do appear substantially stretched –particularly those for smaller firms in the social-media and biotechnology industries, despite a notable downturn in equity prices for such firms early in the year.”  First that is vague, second how would she really know or be qualified to comment on valuation of specific sectors in the market? and third, why even make the comment?

It did however prompt a response from investors. Biotech (IBB) fell 2.3% on the day in response to the comments and back to testing support at the $250.50 mark. Social Media (SOCL) fell 1.2% bounce off the low of the day and holding $18.90 level. These are the events that are a challenge for investors as they blindside the market and prompt a sentiment change. Watching this tomorrow to see how it follow through or if investors see this as an opportunity.

Retail sales data was out this morning and it was not good, growing 0.2% in June and 0.4% ex-autos. The numbers was expected to be 0.6%. Auto sales have been up, but the deep discounts being offered showed sales off 0.3%. Home improvement stores fell 1% reflecting a slowing in spending in the housing sector as well. This data doesn’t bode will for the 3.5% GDP growth being forecast for Q2.

Earnings were the other catalyst on the day with JP Morgan missing on the revenue side, but beating on the earnings side. The stock was up 3.6% on the day. Banks (KBE) held their gains today up 1.1%. Goldman Sachs (beat earnings today) was up 1.3% and Bank of America (reports tomorrow) was up 1.7%. I still like the sector short term on the positive results.

Utilities produced a small bounce after heavy selling on Monday. The sector (XLU) started higher, but gave up the gains on the Yellen comments, but managed to hold on to a 0.5% gain for the day. Still watching support and the downside for the sector.

Gold sold off 2.3% Monday and dropped 0.95% today. The gold miners (GDX) lost another 3.1% today equaling the drop on Monday. That breaks the trendline and opens the downside to further selling if the buyers don’t step in soon. $25.50 is the level to watch on GDX for support.

Rumblings again in Russia and Ukraine issues. RUSL lost 5% the last two days and watching to see if this develops more downside pressure. $20 is the key support level and RUSS is the short side trade on Russia and the move back above $10.50 is interesting.

The data had investors handcuffed most of the day. Watching to see how tomorrow plays out following the introduction of the news and data.

The Russell 2000 Small Cap index chart below shows some cracks in one of the growth indexes. In April the index broke the uptrend line and tested support near the 1090 level. In May the reversal off the low managed to move back to the March highs and was in position to regain the upside leadership role. The last week of trading has tested that theory and now put the index at a key short term support level of 1153. A break brings the May low of 1090 back into play. This is a good indicator to watch as we move forward as a gauge for risk by investors. 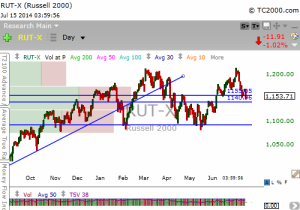