Selling continues as investors start to weigh out the impact of no deal on the debt ceiling. On the one hand many don’t believe the default will happen, but on the other we better be prepared in the event they are crazy enough to make it happen. The challenge is the headlines that are discussing the cost of the delayed budget and debt ceiling issues. “Spending could fall $175 billion next month if the debt ceiling isn’t raised.” Or how about, “One-month shutdown could cost stocks 30%.” Yesterday I asked if fear was driving the markets? Today I am starting to see signs of fear in play. Program selling is picking up as the traders smell blood in the water. If you have not trimmed your positions or at least placed stops at the worst case levels… now is a good time to consider establishing those. Downside risk is growing with each press conference.

Speaking of press conferences… how about the one this afternoon in which the President offered to accept a list of everything the GOP wants to discuss concerning healthcare, social programs, balanced budgets, etc. and spend as much time as they want discussing it. Didn’t say he would change his mind, but he will talk if they open the government. Both sides need to stop making excuses and move forward!

The major indexes are breaking support and worse yet, they are following through on the downside. The pressure is being put on the market by an outside event, the budget and debt ceiling, This puts the news in control along with speculation. As I stated yesterday, the longer this game is played the more likely the downtrend is to play out regardless of what actions they (Congress) eventually take. The trend is taking hold with today’s acceleration on the downside an added validation.

Starting with the weakest index, the Dow broke below the support at 15,100 and remains below that level as it accelerated today below the 14,850 level. The break puts the trendline in jeopardy of being broken on the downside. If we accelerate I would add to the DXD trade which has played out nicely in our pattern trade picks.

The NASDAQ decided to play catch-up on the downside today and moving directly to the 50 DMA. The large cap NASDAQ 100 Index was no help with the downgrade to Facebook by Raymond Janes leading the way. Netflix wasn’t far behind and the valuation comments hit home on these large cap stocks. The leadership of late from the index gave way to fear and the selling was without mercy.

The S&P 500 index broke  the next key support level at 1670 and move to 1657 support. The move also put the uptrend line off the November low in jeopardy of being broken on the downside. The break of 1670 is what we discussed on Monday as the level to invite the short plays. That seemed to happen today as the acceleration lower took place. Remember we are being driven lower by a outside event and that keeps me more guarded about the short trades relative to stop placement.

The VIX index has offered a way to play the noise and get the benefits of being short the index. The index jumped to 19.4 on Monday and followed through with a move to 20.9 Tuesday. Welcome to trading in an uncertain market environment. If there is fear in the market this is where we are seeing the anxiety on a chart.  If Congress doesn’t find some middle ground the downside is likely to accelerate even lower.

Looking at our sector rotation chart below with the September 18th pivot point, the sectors saw some acceleration on the downside from Consumer Services, Healthcare, Basic Materials and Financials. Utilities and Consumer Staples were the only two sector to close on the plus side. Ugly is the only word that comes to mind. 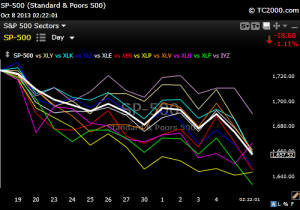 The drop of 1.7% on Tuesday had the index playing catch up on the downside. This brings 3145 support into play as well as the 50 DMA. The large cap stocks were a drain on the broad composite index which declined 1.8%. Does this move embolden the sellers? That is what we will be watching the balance of the week. It is important to remember this is being driven by an outside event and can switch directions quickly. If you are short manage your positions accordingly.

We have discussed the need to respect and manage the risk of the choppy markets and keep your stops in place. Tuesday is one of the reasons you want to protect your downside risk short term. Until those in Washington deem it worthy of their time to deal with the outstanding issues relative to the debt ceiling, expect more of the same.

As always there is plenty to watch and trends to follow. Keep you eyes open, your ears tuned and your stops in place, they will keep your crying on days like today.