The markets moved lower as the day progressed towards the final hour. We can only speculate as to why, but the bigger picture is what really matters. We continue to reside in an environment without clarity looking forward. We can play the theme song of worries surrounding the economy, Wall Street, interest rates, geopolitics, etc. etc. etc. but, until we can gain some faith in where we are going in each of those areas they will remain in the headlines and drive the day-to-day activity for better or worse. Today it just happened to do both intraday causing more anxiety in the markets. In the end not much changed, but the leaders on the downside were industrials, energy and financials keeping the buyers on the sidelines.

All that said, it was transports (IYT) that caught my eye on the day. The chart below shows the index closed below the $148.50 support level today. This is a short trade setup technically on the index and a continuation of the downtrend that has been in play since March. Auto, Trucking and Shipping continue to be drag on the sector. Airlines were the up slightly, but they have been on the downside as well based on the expansion plans with routes. Avis (CAR) fell 5% to lead the individual stocks on the downside. Based on the Dow theory this is a negative short term for the markets overall. 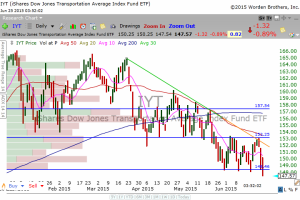 Economic data was a positive on the day early with consumer spending at the highest level in six years. Jobless claims remain at a 15-year low. The economy continues to show signs of improving slightly, but it keeps being overshadowed by worries in other areas like interest rates or transports or Greece or Europe or….

Earnings growth are flat for the second quarter, but they remain at 7.5% growth projections for the full year? This is expected to be revised lower and fundamentally shows why the markets have not been able to push to the upside. This only feeds the argument about a lack clarity looking forward. I don’t see that kind of a spike in earnings growth over the next two quarters when the economic growth picture is at 1.9% for the balance of the year. Simply put, something has to give or this could be a downside catalyst for the markets going forward.

The political stampede today over the Supreme Court decision to uphold subsides under the Affordable Care Act took over the headlines. The healthcare sector spiked higher on the announced decision, but managed to give most of it back prior to the close. It came down to the intent of the law and not the wording of the law… that could come back in many ways to harm the future decisions by courts relative to the practice of law. I am not a lawyer, but it has been argued many times about the intent of the law versus the letter of the law. Worth watching how the healthcare stocks respond tomorrow after investors have a chance to digest the ramifications of the decision.

The headlines remain plentiful calling for a correction to begin any day. I am not here to confirm or deny those allegations, but to merely respect the trend that is place and let the market decide what it will take for the sellers to take control on the downside. The technical data is sideways short term. It could easily be swayed to the downside on news and events. The longer term trends however are still working and have room to work before signalling a exit point. The challenge is psychologically for investors to stick with investments as they move lower. Too often as investors we allow the shorter term emotions to outweigh the strategy or discipline we are following. In other words we violate the rule or override them as we like to say. Stick to what you know to be true and follow the discipline you set out with to manage your money.