The prospect of more stimulus has kept the buyers engaged in the current uptrend, but the lack of detail is wearing on investors. Stronger precious metal prices and a weaker dollar of late indicates there is some belief the Fed will act soon. The next FOMC meeting is next week and all eyes have shifted that direction. The key will be to get more than lip service that the Fed is ready to act should it need to do so. The market is of the opinion they should have already acted to stimulate growth and jobs. If the Fed fails to act at this meeting the response is likely to fall on the negative side of the equation.

To add to investor interest on stimulus is the European Central Bank meeting today. What, if anything, will Draghi do to save the euro? Thus, far the ECB has done nothing except talk about the options. While that has helped the market fears calm relative to Spain and Italy, it has not offered any concrete solutions near term. This will be given plenty of attention today as the announcements are made. The impact of no action will be the key short term in Europe.

The transportation sector is moving to the top of the headlines as Federal Express laid out a negative picture going forward on Wednesday. The index fell 1.3% as a result of the profit warning. This echos what we heard from UPS relative to global weakness. Looking at the chart of the Dow Jones Transportation index below you can see clearly the break of support and the downside progression. 4908 is the next support level for the index. Price has moved below the 200 day moving average and momentum has picked up on the downside. The outcome of this development is worthy of our attention looking forward. IYT, iShares Dow Transportation Index ETF is one way to play the outcome. First, look for a bounce off support at the 4900 level. If the bounce fails and reverses again it will set up a short opportunity. Second, if support fails now, it sets up the same short play. 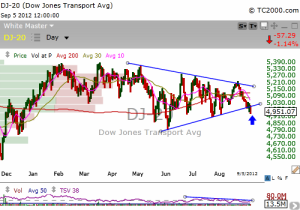 The bounce higher in the XPH, SPDR Pharmaceutical ETF was worthy of note on Tuesday, and the good news is it held the move on Wednesday. The gap higher came on the heels of more M&A activity. The move above $60 was worth noting as it brings the upside back into play. Pfizer has been one of the steady up trending stocks within the ETF setting the pace. Looking at the chart of PFE the consolidation near the highs of $24 could offer an opportunity on a follow through and break higher. This is a sector to add to your watch list and dig into the parts to find the leaders or play the sector itself. The biotech sector is moving higher as well with XBI, SPDR Biotech ETF. Healthcare overall has exercised the upside push as the market takes on more of a defensive posture.

Banks have been attempting to break through resistance, but the global concerns are keeping the sector from breaking higher. SPDR KBW Banking ETF (KBE) is near a breakout point relative to the consolidation over the last three weeks. A move above $22.80 would be a big positive for the sector overall and give the market some much needed leadership.

China is back in the news with rumors of stimulus in the form of building out their rail or mass transportation system. The expenditure is to assist in the economic growth of the country. The project is similar to the one rolled out in the US markets two years ago with bridge and road spending. The impact is positive for the end users, but economic stimulus has been debated endlessly. This action along with the rate cuts in June and July are attempts to kick start growth again in China again. In time they will add to the opportunity, but for now the downside has been in control. FXI, iShares China 25 Index ETF hit new lows this week and remains negative. That said, I am looking for a bounce on all the stimulus and push towards putting money into the system for growth short term. The short side has been the play, but I would start to tighten my stops and consider the future trend for China to be up and sideways.

Overall the markets remain in upward bias awaiting activity from both the ECB and the Fed. Be patient and don’t force anything as this all plays out. The sideways trading over the last three weeks is in response to a lack of activity relative to stimulus. How it responds when it happens will be interesting to say the least. Stops are a priority in this market environment.