Investor optimism continues to rise. The rationale or reason for the improved outlook? The solutions offered in Europe take away the Armageddon option for the foreseeable future and injects hope that the next round of stimulus from the worlds central banks will be enough to jump start growth again. This has been an investment theme since March of 2009. Thus, far it has provided sporadic up trends that last as long as the money, but it has not produced anything sustainable relative to economic growth and recovery. That said, the latest rounds of talks have produced a bounce off the June lows and a push higher for the broad markets. Below are some sectors to watch as this all unfolds further.

Money is rotating into the energy sector and my question is will it stay? The sector has declined more than 19% since the end of February. The bottoming and consolidation over the last six weeks has now gained upside momentum and in the last five trading days jumped nearly 10% off the lows. The geopolitical issues in Iran has been a large part of the momentum or speculation, but the news of the European Union agreement in principle on how to handle the sovereign debt and banking crisis has contributed as well. Are these issues sustainable enough for the sector to maintain an upward trajectory? The skeptic in me doesn’t believe in the move, but the charts are screaming buy. The chart below of XLE, SPDR Select Energy ETF shows the break above resistance at $66.50, but note the 200 day moving average and downtrend line off the February high just overhead. This is one of the sectors to watch as we finish the week and look forward to the second half fo the year. 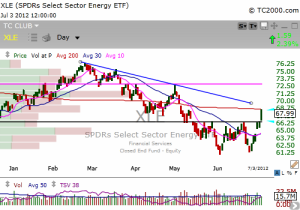 Another sector seeing money flow is the global stocks. They have been beaten down on the constant news and concerns relative to Europe. Looking at charts of Spain (EWP), Italy (EWI) and Europe (IEV) you can see a solid bounce of the recent lows. From my view this is a relief bounce from last weeks European Summit and plans to use a TARP type funding to bailout the banks and put structure around the process on sovereign debt issues. The looming question remains solvency. Will there be enough money to bailout the euro and the European Union? For now the answer is yes, and that is enough to produce a rally in the global markets.

China has been a benefactor of the move higher relative to the European news as well. The Chart below of FXI, iShares FTSE China 25 Index ETF reflects the bounce off the recent lows and back towards the top end of the consolidation range. A break above this range could set up a trade opportunity short term. The Chinese government is making moves towards easing on lending restrictions and putting liquidity back into the lending system. The move is seen as a positive by most economist to stimulate growth again in the housing and other manufacturing opportunities. This is a sector worth our attention should all the plans pan out and money flow back into Chinese stocks. 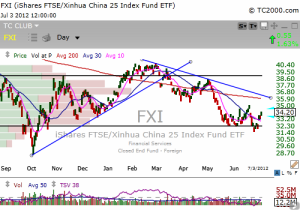 Retail is another sector on the move off the lows, but equally has plenty of questions surrounding the outlook moving forward. The consumer has been called into question as the US economic data continues to show slowing as jobs struggle and the overall growth picture is flat. The recent rally in the sector has come as a result of the anticipation relative to stimulus from the central banks around the world. Thus, the move is based or founded in hope, which by the way is not a strong investment strategy. However, the chart shows a solid bounce off support and back above near term resistance. The ISM Services data due out today will lend some insight to current ‘hope’ in place. If the current move pans out the target would be a move back to the top end of the previous trading range or the May high. 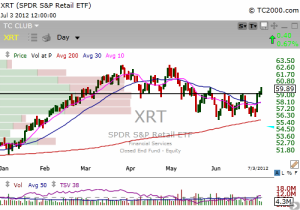 The current rally off the June lows remain in play and the news driven rally continues to find support from investors. The sustainability of the rally will be substantiated by the anticipation becoming reality. In other words, the hope of another round of stimulus creating real growth will have to unfold. Time will tell, but in the short term the charts or technical data is providing some short term trading opportunities if you are willing to accept the risk.