Quiet start to the week as the major indexes hold gains from last week, but do nothing to change the view. The upside trend remains in play and there is a division between the negative sentiment looking for a correction or pullback, and the positive view looking for the next leg higher to continue off the Friday break through resistance. Time will tell which is right, but for the current view… the upside remains in play.

The technical view of the market is shown in the chart below of the S&P 500 index. The chart starts on December 28th with the pivot off the low following the fiscal cliff scare in the broad index. As you can see the bold white line (S&P 500 Index) the trend continues to be gradually higher. We have referred to this in past updates as melting higher. Regardless, the trend is to the upside and short term that is what we honor. 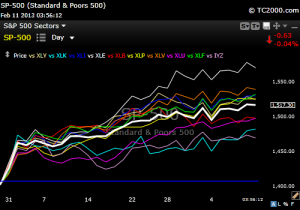 The leadership over the last couple of weeks has remained consistent with Energy (top white) leading the way higher. One thing we have noted along with the move in energy is the defensive sectors are the core of the leadership. Healthcare, Consumer Staples and Utilities have been key components on the move higher. However, last week, technology ( light blue line at the bottom) started a gradual push to the upside with an attempted break through resistance. XLK, SPDR Technology ETF did break above the $29.80 level as a key move. That level held on Monday as the climb off the low from Apple has help. The Semiconductors have provided upside as well in recent trading. The previous leaders of Networking and Software are trading sideways currently and any upside moves would add to the momentum.

What are we watching today?

The key everyday is to remain discipline, manage each position as if it were your only position, and remain focused on your goals not the noise of the market.