The markets open on the upside and looked prepared to rally, but it only lasted an hour before the sellers took their shot and the index faded to test 1905 on the low of the day and closed at 1909. Most traders are expecting the market to bounce from the oversold indicators, but it is building a different attitude with the issues in Russia, global economic weakness and threat of higher rates from the Fed. The worries are sticky this time around and for now the sellers have control. How low do we go? That is still up for debate. The use of stops for predetermined exit points, discipline on any positions added and a confirmation of the move lower will introduce the short side of the market as a longer term possibility.

Russia remains a talking point on the day as Putin enacts his own sanction again the US and Euro Zone. Little impact to the country ETF RBL. RUSS gained 15% the last two days and the sellers needed a rest today to count their gains. The decline a trade and we would keep our stops near the $14 mark on the move. The uncertainty remains a challenge for the equity markets as it anticipates action by Russia. Downside risk remains in play and for now.

Earnings and IPOs were another driver on the day. $12.5 billion in new shares pushed into the market last week and more this week. This is causing money flow to be diverted and potentially is impacting the downside of the markets as a result. Earning weakness this week is not helping and if looks like more disappointments than opportunities on the upside. Retail posted some solid upside numbers last week to give an assist, but it wasn’t enough and this week isn’t looking much better.

With earnings season coming to a close and 446 companies reporting FactSet shows that 73% have reported earnings above estimates. In turn, that has addressed the issue we have been discussing for three quarters… earning growth. They are up 8.4% based on those who have reported to this point. That is well ahead of the 4.9% estimated growth for the quarter. That from my view is one of the more positive data points for Q2.

Draghi who is sticking to his wait and see mindset for any additional monetary policy changes. He used bullish words like, weak, fragile and uneven. Italy verified that outlook with contracting economic data on Wednesday. This put pressure on the European stocks which closed down more than 1% on the day. IEV is now down 10.3% since the June 19th high.

Volatility index closed at 16.7 and VXX gained 2.1% on the day. This is not going away like the last couple of spikes higher based on the last week of activity. If the volatility heats up the downside will follow. The shift to fear versus optimism is in play short term.

Gold  moves higher for the second day and closes above $1310 on the day. The move is getting credit from the Russia/Ukraine issues and the Fed not dealing with stimulus fast enough and sparking inflation. Only modest gains of 2% the last two days combined, but enough to garner attention from investors.  The 1.5% gain today was nice, but didn’t solve anything relative to the longer term outlook for the price of the commodity. A move above $126.50 on GLD would worth our attention short term for a upside trade. It would only follow that the gold miners are moving higher as well on the news. 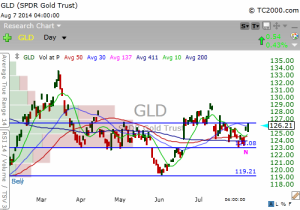 Green Mountain Coffee (GMCR) was off on earnings data, but not bad. However, we think, believe, interpret, what you word you would prefer, that coffee prices are going higher (JO), and that would be a negative on the margins going forward for the stock. Downside could be a possibility if the this plays out near term. Worth adding to your watch list to see how it unfolds.

NetFlix (NFLX) was up 4.5% on the day as they surpassed HBO in subscribers and revenue. Can they keep it going?  That hast been the primary question and drag on the stock the last six months. Worth watching to see how this plays out in the short term. Plenty of negative commentary about the outlook.

Downside is firmly in control of direction and the test lower today brings the trendline directly into play and what we will watch tomorrow as we conclude the trading week which has continued to push lower.