The buyers are still engaged, the outlook is still mixed and there is no news good or bad to move the indexes. As we stated last week the story for this week would come from the economic reports for October and the theme has been for most of the year… mixed reports. The ISM manufacturing beat and the ISM services missed. ADP showed strong private sector jobs and the government jobs report showed steady growth and little movement in the participation report. I would say that nothing was moving enough to push the market through the resistance of the previous highs, but nothing bad enough to push it lower. Therefore we punt into next week to see how the story unfolds from here.

Earnings are still hit and miss as well. The election has been the headline of the week as analyst talk about what stocks and sectors will be the winners along with the republican party. I am not convinced we see much of that come to fruition, but it does make for good talking points. The defensive sectors were the leaders on the week as we discussed below, and that is not the sign you want to see if we are going to break higher and continue the microtrend built off the October 15th low. Remember this is still a market looking for a sustainable cause to believe in and we will continue to take it one day at a time.

Below I outline the major indexes with a focus on where we are and what we are watching going forward:

The first chart below is the scatter graph of the 7 Asset Classes. As you can see the US equity markets remain the clear leaders off the bottom pivot point on October 15th. The REITs (IYR) resumed their number two spot as the Fed FOMC worries disappeared and they resumed higher. The EAFE index did make a solid move on the upside last week, but failed to hold the trend this week as worries once again take over with the dollar gaining strength and the emerging markets showing further weakness. Treasury bonds are the laggard, but have held up well despite what the Fed is projecting. Overall the trend is higher and the positives still outweigh the negatives to the chart. Steady as we go… stops in place. 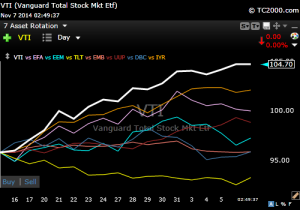 As stated above the US equity markets continue to lead overall. Breaking down the major indexes we find that the NASDAQ was basically unchanged on the week and despite completing the ‘V’ bottom reversal it has hit a wall for now. Some pressure on the biotech and healthcare from the election results, but that may just be temporary. Money is rotating to the energy sector on hopes of the Keystone pipeline and other key issues that are stalled in Washington. Time is the key it will no happen overnight. As we stated last week that statistically the ‘V’ bottom pattern tends to trade sideways or lower initially as the energy expended to get back to the break even level is greater than the value lost in the decline. Watching for a test of the 4560 level next week if we fail to find any catalyst to push the index higher. 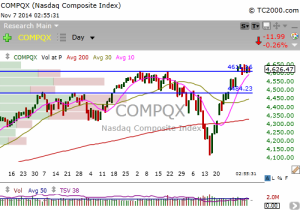 The next chart is the Russell 2000 Small Cap index. The break of the downtrend line off the July highs held and like the NASDAQ traded in place this week with little progress made. The growth sectors have struggled in light of the Fed posturing to hike interest rates and it has yet to take on a renewed push on the upside, thus the leadership from the defensive sectors as seen by the leadership in the S&P 500 index below. Watch for a test of the trendline if we don’t see a renewed momentum in growth stocks. 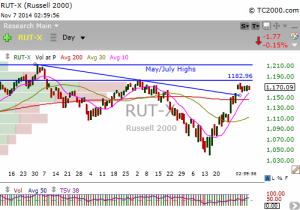 The next Chart is the S&P 500 index. The index gained 0.6% on the week and set the pace on the upside. The leadership for the index has been the defensive stocks. Consumer Staples (XLP), Industrials (XLI), Basic Materials (XLB) and Utilities (XLU) are the leaders on the week In fact, looking at each of the these charts shows upside breakouts on each of the sector to continue the uptrend. Technology, Consumer Discretionary and Biotech/Healthcare failed to continue the moves higher as money rotates to where it believes it will be treated the best. This rotation is something to watch going forward. In order to build on the trend higher we will need the growth stocks to renew their upside momentum short term. The S&P 500 index was the most consistent on the week and one to watch next week for leadership. 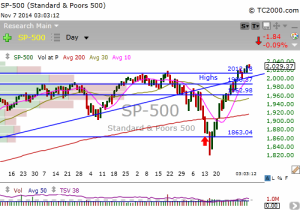 The last chart to look at as we end the week is the NASDAQ Biotech ETF (IBB). The acceleration higher set the tone for the upside the last four week. This week it set the tone on the downside losing 2.3% on the week. This is looking like a topping pattern for the index as money looks to find a safer haven. The biggest concern voiced is the shift in power in Congress and what impact will it have on the affordable care act? Will they repeal the tax on medical devices (watch IHI)? Will the loopholes be filled for corporation participation? The uncertainty has shifted the momentum in the sector short term and could test back tot he 278 level near term. BIS is the short ETF for the sector and shows a bottom reversal set up that would be the inverse of the topping movement in the chart below. Worth watching to see how it unfolds in the coming week. 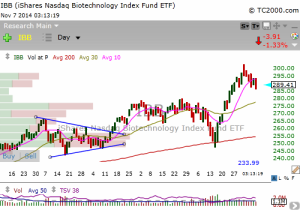 This was a week of digestion for the broad markets and some rotation in the sectors. All of this will unfold clearer in the coming week of trading. I covered this in more detail on the Friday Video Update… watch it to dig into this topic further.

Watch and trade according to your risk tolerance. Everyone has different trading styles and you have to find what works for you and your personality. Don’t put yourself in positions you don’t understand or take risk you can’t tolerate. Not every trade results in a profit, but controlling your risk will manage the downside losses.