I am asking the same question you are, ‘why if the data continues to be weak, is the market moving higher?’ As my dad used to say, ‘why, ask why?’ In this situation I guess that makes more sense than any of the reason analyst are promoting. One that was very profound this morning stated the supply of investments has eroded by several trillions of dollars since the 2008 financial crisis. While that is true, it doesn’t justify why stocks would move higher relative to the current fundamental data. As I stated in earlier comments, fundamentals don’t matter, until they matter. So, I am not asking why any more.

The chart below is the S&P 500 index. As you can see on Thursday we made a move back to the closing high at 1592 and retreated in the afternoon, and that retreat has continued slightly lower today. Technicians are looking at this and starting to see a potential double top formation. If it breaks below 1575 that would complete the second top and signal a short play… right? Under normal circumstances I would say yes, it is worth trading the downside relative to the risk of the trade. Your stop would be a move back above 1592 or 17-20 points. Your target would be 1538 or a gain 35-38 points or roughly a 2 to 1 risk/reward on the trade. Here is where my opening comments come back into play… the emotions of the market going against the data weighs on making that trade. In other words we see it developing, but we don’t believe it will happen due to what has been happening. This is your emotion out smarting your logic. In the end we have to make a decision to take the trade or pass. For most, they will pass. 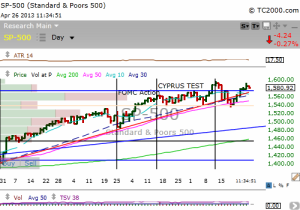 What I have learned is to trade based on a defined strategy, not what happened yesterday or last week. If your strategy is tested and works for your personal style of trading, go with it, even when you ‘feel’ it won’t work. Odds are that is the time it will work. Discipline is about acting even when you don’t think it will work. Below is a chart of our recent trade on crude oil. The reason I am showing this is not to look at the trade so much as to what was going on when the trade was made.

I am looking at the chart of OIL which is the ETN for the commodity of crude oil. You can see the shaded box at the bottom of the recent selling to approximately $20 per share. On April 17th the test of support caught and bounced slightly to close the trading day. The next day crude bounced and moved back above the $87.75 level of previous support, now resistance, and holding the move into the close. I have a strategy for playing these type of bounces off what I deem to be aggressive selling. Taking into account all the negative in the global markets and other reasons that oil had been selling lower, it would have been easy to say the trade was a bear trap setup. But, because I do plenty of fundamental research to go with the technical data, my strategy said buy the move through $89 and set the target at $93 with a stop at $87.50 on crude. For OIL below that translated to entry $20.85, stop at $20.60, target $21.60. That is a 3 to 1 risk/reward and thus I made the trade. As you can see it worked and emotionally I can give you all the reasons it should not have done so. Trade your strategy, not your emotions. 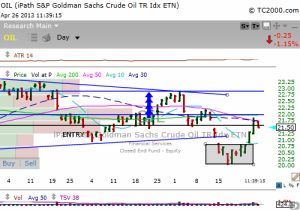 The set up for the S&P 500 index above, is currently in the same scenario, and if it follows through on the downside to the entry point going forward I will take the trade based on the strategy and follow the discipline, good or bad. Remember, it has to be a strategy you have tested, traded and have confidence in, otherwise your emotions will win.