Another day of the sellers exerting control over any buying attempts. The S&P 500 index opened higher, tested support at the 1900 level bounced positive on the day and in the last hour of trading invited more selling to close lower. The downside remains in play and the index joins the other major indexes with a close below the 200 DMA. Until we have a climax sell off with a possible intraday bounce the selling is likely to continue. The Volatility index hit the 24.4 mark on the day and I would expect a push to resistance near the 26.5 level and 1864 as support. If that doesn’t hold it will get worse before it gets better. 1810 is definitely a possibility if the index fails to hold the next level of support.  The chart below shows the index and the progressive move lower and the different levels of support that have been broken during the move. 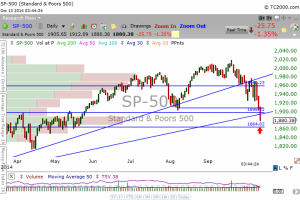 This puts the downtrend firmly in play off the September 18th high. Even if the index were to bounce back to the 1930 level or 50 points, the downtrend remains in play. It would take a 100-120 point rally to reverse the current momentum the sellers have garnered over the last week. This keeps me on the defensive and also would put us in a position of selling into a bounce or rally short term. I am not attempting to prophetic about what is on the horizon it is just simple charting 101. We have to take what the market gives and maintain our disciplined approach to trading and investing capital.

Healthcare broke below $63 and dropped 2.3% on the day adding another sector on the downside for the broad indexes. The move breaks the short term uptrend off the April low. The move lower the last week has come on twice the average volume exemplifying the momentum of the sellers. Still a sector to watch longer term for a reversal and upside trade opportunity.

Consumer staples reversed and traded down 1.4% negating the break higher from last week. This is another indication of the breakdown accelerating in the broad indexes. Utilities is the other defensive sector holding up currently, but you can see above the move  lower in the healthcare sector took the seventh of the ten sectors below support. The chart below shows the downside in the eight sector with the two hold outs at the top of the charts. 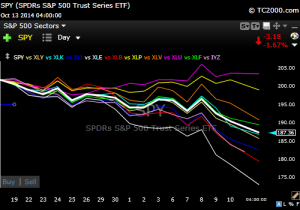 We are not willing to step in yet, but if and when the climax hits on the downside the bounce or snap back will quick. There will be the next opportunity to capitalize on the move lower. If the strength of the upside warrants trading we will entertain that as well. For now take it one day at a time and go with the trend as it plays out.