Did you hear there was a FOMC meeting today! The lack of excitement for the meeting is a result of the fact there is nothing left for the Fed to do except explain QE3 plans. They did express concerns over slow job growth, inflation heating up and slow economic growth. Otherwise things are great.

The markets were holding up throughout the day, but in the end they closed on the downside. This is a confirmation of the break below support by both the S&P 500 index and the NASDAQ index. We continue to hold our short positions relative to both indexes and look for the opportunities as they present themselves.

Facebook set the pace on the upside gaining 19% on the day following improved earnings. For those willing to stick out the IPO they are only down 50% now. This is still a stock worth watching on a break above the $23.40 resistance. There may well be another 20% upside in the stock based on the current outlook going forward. Add FB to your watch list.

My other favorite announcement of the day is the government suing Bank of America for $1 billion for mortgage losses. Of course these were the loans they purchased from the defunct Countrywide Mortgage. This is like the tobacco trials all over again. If we take and take and take from the banks they will have to fold under the government to be run which they have continually proven to be great at, i.e. the US Postal Service. Bottom line is watch the banks on the continued news of suits relative to mortgages. By the way… isn’t that what the Federal Reserve is buying at the rate of $40 billion per month?

AT&T announced solid earnings for the quarter, but the stock fell nearly 1% on the day. The downside remains in the telecom sector short term and even good news doesn’t help for now. Watch Telecom (IYZ) at $24.35 support.

Bottom line… things could still get worse before they get better. Scanning the sectors and the headlines shows negative sentiment building for the broad market. If you have not been focused on protecting against the downside warnings… it is never too late, set your stops and manage your risk looking forward.

The selling has found some support short term. Watch to see how traders and investors play this short term. The downside bias is in play, but we may have some attempted bounces along the way. They will have to see a significant change in the key data points to build a sustainable rally.

NASDAQ 100 Index on the downside. The break lower is looking for support? Watch the 200 day moving average. The indicators are reading oversold short term which puts the bounce opportunity in play. Watch QQQ on the upside.

Gold fell through support and the downward shift is in play. Watch for $1670 to be tested near term.

China has been moving higher as investors like the outlook. Watch for a test of the $36 level currently. If we hold, establishing a position is the goal.

KBE – watch the banks to hold support and bounce? Government lawsuits may get in the way short term.

Apple – (AAPL) Holding near the $610 mark with earning tomorrow. Watch the reaction for the stock and the market.

Below we address the asset classes looking forward:

S&P 500 Index / Sectors-to-Watch – The index held below the 1420 support broken on Tuesday confirming the downside move. The break lower from the consolidation pattern is now in play. The key is a shift in belief that has built over the last two weeks. The downside is gaining  traction as investor worry about the US economic picture worsening, and it seems the Federal Reserve shares their worry. 1386 is the number we posted on last nights video for support. 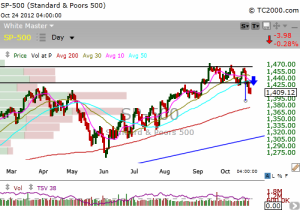 The Scatter Graph below is run from a starting point off the high on 9/14 following the FOMC meeting rally and the current high. It also reflects the trading range of the index during this period as well. The leadership has been Healthcare, Consumer Staples and Utilities. However, the last four trading days shows a shift to the downside by all ten sectors. The biggest loser has been the technology sector shown at the bottom of the chart in blue. The pick up in selling activity is reflected in the chart as all 10 sectors are pointing down. 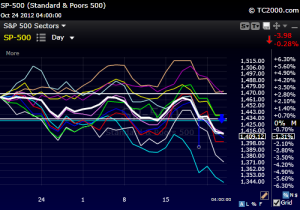 The activity on Wednesday showed little in the way of changes on the downside. XLE and XLU fell another 0.7% to lead the downside for the index. Watch how healthcare, financials and the consumer sectors to respond by bouncing off the near term low.  We remain patient for now and take it one day at a time.

Financials – The index is attempting to hold the uptrend, but the negative sentiment and actions taken by the government aren’t helping matters. This is still one of the leaders and you have to watch to see how it plays out near term.

Energy – Broke support as crude continues to move lower and towards the next level of support. We established the short play on the drop lower today.

Healthcare – Broke short term support on the index and looking to hold the 200 day moving average and bounce back.

NASDAQ Index – The index has been under pressure from the large cap technology stocks selling, and that expanded with Google and Microsoft earnings. The shift lower brought the QID trade back into the picture on Friday at break of $66.60 on QQQ. Manage your stop on the downside play. The index caught some support on the 200 day moving average on Wednesday. Watch for the upside bounce.

Dollar – The dollar, like stocks, is being pushed up and down based on the daily sentiment towards Europe and the global economic picture. The downside pressure on the dollar abated as fear has crept back into the global markets. Watch the bounce in play on the buck.

WATCH: UUP – back to the top end of the range.

Treasury Bonds – Another attempt to make break above the downtrend line off the July high. Watch to see how this plays out short term. Potential trade to $124.40 is the move. Risk/Reward. Fell nearly 1% on Wednesday as the fear subsides towards stocks short term.

WATCH: DBB – The downside or short play of DBB has been the winner! Watch $18 for support.

WATCH: UNG – In trading range and patiently working through the lack of direction short term.

6) Real Estate (REITS) – The sector tested the recent high and support at $64 (IYR). Watch your downside risk if you still own this sector. Sitting on support at $63.90 on IYR.

WATCH: REM – Downside back in play after the short term bounce. Held $14.45 support.

WATCH – NLY – Downside back in play after the short term bounce. Held $15.70 support.

Markets fight back from a negative start

The broad indexes faced more selling to start the day. A look at the intraday chart shows a dip of [...]