Mixed earnings on Wednesday get the blame for the modest selling. The guidance from several technology stocks didn’t help matters and Caterpillar’s miss put pressure on the Dow Index. Boeing helped to offset the negative impact with better than expected data on earnings. This is what we discussed in the weekend update… fundamental data would start to matter with the Washington tango out of the way. Some sectors are performing better than others and unfortunately those with the biggest impact are making the biggest waves for now. This is a market environment where the reality is that some sectors/stocks are doing better than others.

Is the infamous Wall of Worry being put back into play? Forward looking growth has to be a key data point of interest for investors currently. The challenge is sales per share growth grew at 2% so far this year, GDP growth is pegged at 2% currently for the year, and profit margins continue to shrink. That does not make for a positive outlook longer term. Thus, the worry level is growing.

Mixed data on dollar, bond yields, oil prices and gold have the speculation machines churning. The dollar is weakening again showing the impact of stimulus from currency traders. QE is not providing any P/E expansion or inflation, that in turn keeps stocks in check and lagging the stimulus. Why the jump in stock prices then if the stimulus isn’t providing the jolt? Computer trading algorithms are finding momentum and riding the trend until it breaks and then scans for the next wave. At least those are my reasons for the Wall of Worry coming back into play short term.

Risk continues to rise and eventually the reality of pricing will take advantage and the downside will result. Not attempting to speculate on when, simply making myself and other aware of the potential risk lying ahead. If it never materializes, at least we were aware of the risk and prepared to take our profits off the table. Better to trade a plan than to be running scared by unforeseen events.

The S&P 500 index moved lower from the new high on Wednesday.  The near term target remains at 1800 on the index and support is 1730 and 1690. I like the upside going forward assuming the earnings and economic data hold up. However, the negative side, as seen today, is where the danger lies. Stay focus and maintain awareness of where the exits are.

The NASDAQ hit a new high again at 3929, but stumbled further on Wednesday. Earnings reports were the blame, but the index did manage to bounce off the intraday lows. The damage was minimal, but it did get the attention of the investors. The leadership remains for now.

The Dow remains the laggard, as earnings beat on key stocks. Today Caterpillar disappointed losing 6%. However, it was offset by Boeing beating estimates and rising 5%. Not a fan of the index as earnings remain mixed bag for the sector. I am willing to wait and see before committing any capital to the index.

The Small Cap stocks continue to provide solid leadership much like the NASDAQ. They did test slightly on the day and we will watch to see how it plays out moving forward.

The chart today goes to Financials (XLF) as they struggle again to break through the resistance at $20.85. This is the fourth trip to this level for the sector and eventually the head banging against resistance ends with a move lower. The banks (KBE) were lower and are testing a key support level as well. It the market is going to push higher from the current level, financials need to be a part of the leadership. We will be watching to see who this plays out both for the sector opportunities as well as the broad markets. 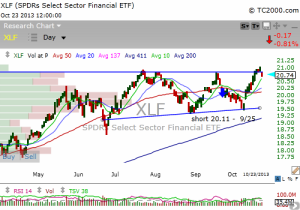 Apple was our stock of the day yesterday and it was making an attempt to follow through on the positive momentum heading into the release of the new iPads. It traded up to $528 and as low as $508 and following the press release and fanfare releasing the new iPad it tested $510 again. The upside still remain favorable, but a little less volatility would be nice.

Netflix (NFLX) – Tested to support at 318 and bounced to close at $330. The selling on Tuesday is still being talked about among the investment community. Some are buying, but Carl Icahn announced he sold his position. I am not saying to sell, but you have to have a stop at a point that protects your downside risk.

Gold Miners (GDX) were up 4.3% Tuesday and down 3.2% on Wednesday. This shows the lack of direction in the metal despite the move off the recent lows. Still worth our attention in the event the upside holds and continues.

Interest sensitive assets are moving higher as the yields on the Treasury bond is moving lower. This has helped REITs, MLPs, Bonds and Utilities.

What to Watch Tomorrow:
More earnings on tap and we will see how much they move the value of stocks. We are still likely to see more selling at some point moving forward. Wednesday’s move was a taste. Set your stops and trade your plan. Don’t get caught up in the euphoria of the speculation as we saw with the downside in Netflix. The downside moves happen quickly. There is a long way to go and plenty of argument left to take place.