The top isn’t the top, until it is the top! There I said it… too much watching for a top and not enough attention to the opportunities. All week we have been looking at the various sectors setting up consolidation to potentially break higher. Some have accomplished that while others have continue to struggle. Technology as an example broke above resistance last Friday and looked poised to move higher. It has stalled ever since as the earnings and warning from the large cap stocks have kept the progress in check. Industrials on the other hand have moved to new highs and continue to see buyers stepping into the sector. Bottom line, watch the charts and listen to the market not the analyst.

Gold is a chart worth watching as it flirts will breaking a key support level. As you can see on the chart below the metal has been breaking minor support over the last two months. But, if the move below $159 takes place on higher volume the downside could accelerate. Watch, don’t assume, as this plays out. 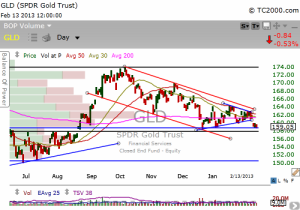 Consumer Discretionary (XLY) sector tested lower, found short term support and regained the upside momentum. A break above the $51 will invite buyers back to the table. Retail (XRT) is the key sub-sector to watch and it is showing some fatigue along with underwhelming sales report on Wednesday. This sector may test with the broad markets on the downside prior to rising higher, but is another chart to watch going forward.

Yields on Treasury bonds are rising as the 30 year bond hits 3.22% on Wednesday. These are levels the bond yield has not seen since last April. The impact to the bond has been equally impressive on the downside. TLT has dropped 8.3% since the bottom in stocks on November 15th. If this trend continues it will have a short term positive effect on stocks, but longer term it will be a drain on the economy and stocks. The chart below is the inverse ETF for the long bond TBT. As you can see the rise has corresponded with the rise in interest rates. A break above the $69 resistance level could result in a move up to $77.40. Again this is a chart worthy of our attention moving forward. 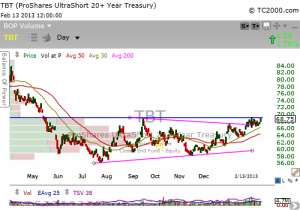 The base metals have been a mixed bag over the last five months. Looking at the chart of the base metals ETF (DBB) The move off the August low has been euphoric and disappointing as the consolidation wedge or triangle formed on the highs and lows. The $19.75 level is the current resistance on the upside. The key to making the move higher is copper and steel.

Copper (JJC) is trading in a similar patter to the broader ETF, but the metal has been moving higher on the speculation that China will start consuming larger quantities as the economy recovers. Steel (SLX) made a strong bounce off the November low and is currently trading sideways in a six week plateau or consolidation pattern. The upside for steel is still favorable short term. This is a sector to watch looking forward. 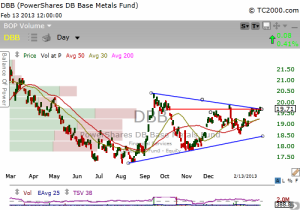 After-hours Cisco reported better than expected earnings and in-line guidance. The stock was lower by two percent. Whole Foods posted better than expected earnings, light on revenue, but they lowered future guidance sending the stock lower by more than six percent. Applied Materials up nearly three percent on better earnings. Nvidia missed earnings sending the stock lower by one percent. There were plenty of other missed earnings posted from Skechers, ValueClick, Barnes & Noble and Trip Advisor, etc. This was not good news for the broad market as well as specific sectors. Watch to see how each responds in trading today. Thus far the market have been able to absorb the negative and turn it into positive. How long that will last is the multi-million dollar question facing investors.