The broad market indexes opened lower on worries about the global economy. The Philly Fed Survey was -1.9 for September better than the -4 estimates, and it was an improvement from Augusts -7.1 report. That helped turn stocks off their lows for the day and closing basically flat on the S&P 500 index.

Some interesting focal points on the day:

Oil held steady after selling off overnight and closed at $92.69 for the day. The combination of the White House considering a release of the strategic oil reserve release, Saudi Arabia offering more supply stating prices were too high, and invesntories rising in the Wednesday report have impacte the price of crude to the downside. The commodity is still looking for direction as it held support today.

The dollar moved higher on the economic worries globally. The bounce off the support at $21.60 remains in play on UUP. The impact to commodities of the dollar were not noticed in pricing today. Gold and silver moved sideways on the day as the consolidation near the highs continues.

The transportation stocks continue to get hit by the economic picture and earnings. IYT is testing support at $88.20 today. The sector has fallen nearly 5% this week. Weakness in the transports makes it hard to believe the broad market will continue higher. Watch how this unfolds.

The VIX index remains at the lows near 14. No signs of any pick up in fear near term.

Below we review the moves in the sectors and the outlook.

S&P 500 Sectors-to-Watch – The index continues to hold above the 1420 level as the index looks for more direction. Investors stepped in despite the economic picture and trusted the Fed would do the right things to take the markets higher. Stimulus was the driver and now investors are looking for the next catalyst and they are hoping it will be to the upside. 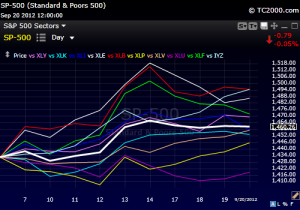 The leadership is rotating from energy on decline in oil… Watch the rotation for opportunities:

Basic Materials – The sector has been testing the vertical run higher. Watch the downside risk as China has a argument with Japan. Remember the move started based on the stimulus in China was a positive for the materials sector. Watch and look for the opportunities in XLB. Manage your stops for now. Bounced on Wednesday, but still a concerns near term.

Financials – The sector is testing the recent move higher. $15.75 is likely support near term. The trend higher remains in play with the move accelerating. The FOMC meeting was the driver for the sector short term and with that out of the way we are in need of a catalyst. Banks and brokers have been leading the move higher, but they are testing as well. We hit the stop on KBE on Monday. Still looking at the upside for the sector longer term.

Energy –  Testing the move higher as oil takes a move to the downside. $73 is support on the downside if crude continues lower watch and take the exits. Watch for a opportunity in the pullback test.

Telecom – The test of support resulted in a continuation of the uptrend for telcom. Hit a new high and is taking on leadership for the broad index. This remains a key sector for investors to take advantage of short term.

Healthcare – The sector continues to find buyers and pushes gradually higher. Moved above $39 and remains near recent highs.  IHF moved up nicely off the lows and hit new highs and is testing the move. XPH moved off the lows as well, and moved to new highs. IHI medical devices ETF hit new highs last week. Only question mark for the sector is earnings looking forward.

Biotech – The sector broke from the consolidation and was worth a trade on the upside play. The sector is helping drive the healthcare higher as well. Solid move to the upside and we have raised our stop to protect the gains. Break above $94 would be a positive for the sector.

Consumer Services – The consumer services sector has the retail stocks support relative to the trend higher. XLY and XRT have both moving higher short term with some testing of late. Digging in and looking for the leaders has been the best play. JC Penny’s broke support on rumored CEO comments on Wednesday and the rest is in the chart.

Technology – The sector overall has performed well and continues to push higher. Watching the weakness in Semiconductors (see below). The networking (IGN), software (IGV) and internet (FDN) have all moved higher to support the rise in the overall sector. Watching FFIV, F5 Networks to break above resistance at $105. Pennant forming on the break higher watch for continuation of the move higher.

Semiconductors – The sector has been testing lower and the downside leadership has been from Intel. The sector remains weak, but is still consolidating and looking for direction. SOXX tested teh low today at $32.20. Watch the Intel play as it is attempting to bounce off the low. We adjusted the stop to protect the gain on the trade.

NASDAQ Index – The upside momentum has been as a result of the technology stocks, but the downside risk in in the semiconductor stocks. The trend is up, but manage your risk. Solid bounce back in the index.

Small Cap Russell 2000 Index – Came close to the stop today. Watch and exit if we hit the stop.

Dollar – The dollar started lower on the FOMC rumors and the ECB stimulus is helping push the dollar lower as well. Throw in the Fed action on stimulus and the dollar is testing the lows from April. Looking for a small bounce off support and then a resumption of selling.

Treasury Bonds – The bonds are heading the other direction again on the fear factor about the economy. Willing to watch from the sidelines for now.

4)  Commodities: Volatility has picked up in the setor short term and we don’t hold or recommend holding any positions short term. This will work out and the opportunties will present themselves again.

5)  Global Markets: The global markets are testing the move higher on worries of the economic picture globally. Watching the EAFE index and maintaining our current stop.

Brazil Small Cap – Bought on the move to the channel top at $37.50 with potential move higher. Solid move and follow through on the upside breakout prompted the entry at $37.60. Manage the trade and Raise Stop to move higher.

6)  Real Estate (REITS) – The sector moved to new highs, but has sold on the recent data and stimulus. I like the outlook long term, and short term is experiencing volatility. Hit our stops and took the exit Wednesday. Breaking down further on Thursday to $65.81. REM is still in play on the upside near term.

How much negative influence will Spain have on the current uptrend in the European markets? The answer will depend on the time line and details released or how long it will take to cut a deal with the IMF. Nothing has developed thus far and EWP is testing the climb higher. Downside risk is elevated for this country ETF.

China was moving on infrastructure stimulus, but the spat with Japan has derailed the progress. Watch FXI as the up and down impact of news creates some short term volatility. Manage your stops. To make any money trading the position you have to be willing to take your position the night before and bet on the direction for the day. Watch as this unfolds.

Commodities should be the benefactor from the Fed stimulus activity. However, that has not materialized for the sector overall. ETFs to watch relative to this move… 1) DBA, PowerShares Agriculture ETF – fell to the bottom of the trading range  and we are still watching as this unfolds. An entry point of $30 would be a play to the top end of the range short term.  2) UNG bounced on Thurday? Watch for follow through, but it has been very volatile. 3) Oil has been volatile as well breaking support on Wednesday, but still watching more for the downside than the up. 4) Base metals are testing the move higher and looking for the next catalyst.

Attention will turn towards the election soon and certain sectors will start to react to whoever is leading. For now that is Obama and as we get closer to November investors will factor in specific policy events they believe will influence the markets. One to watch now is the tax hike on dividends. Long term it will be neutralized by the Fed keeping rates at zero, but shorter term it could create some opportunities. This is on my watch list looking forward.

QE3 was good for stocks to move higher last week, but what about the future? Inflation is one concern reflected in the precious metals prices jumping higher, and what does this action really say about the economy for two. The latter is a bigger concern from my view going forward. The Fed is essentially stating the economy is in enough trouble we need to take more action towards fixing it. This is where we have to be aware that stocks may move higher now in response to the stimulus, but as the economic data is reported we have to prepared for a correction or pullback in prices.

What am I watching now:   1)  BAC – Bank of America to move towards the target of $10 short term. Holding support near the $9.10 level for now.  2) Oil to bounce off support at $90. If breaks short play gets interesting. Held support today and we continue to watch.  3)  Utilities are building a base near support at $36.20 on XLU. Watch to see if we bounce back towards the highs. Held today and still in need of some buyers. Each time stimulus is offered by the Fed this sector pulls back, tests support and then moves higher. Be patient and let this play develop.