Hope springs eternal for an extension of six weeks to negotiate over the debt ceiling and the budget for the Federal Budget. Those six weeks of time equated to a 2% gain for the broad indexes. The funny part is that move was just on the hope of a deal. I broke down today and read the 2014 budget and proposed deficit to run our government. If you want something that will make you crazy go check out the numbers and make your day. On the video tonight I covered some interesting thoughts on what happens if we don’t approve a budget. Believe it or not we will not collapse or go into default unless Congress chooses not to pay our bills. That aside, there were hopes of a deal to put humpty-dumpty back together again. That sent the broad indexes higher on the day.

Today there are ‘confirmed’ rumors of yesterday’s rumors that they are going to extend the timeline six weeks and ‘negotiate’. If or when that transpires we will see how the markets react to the news. Six weeks is nothing and the way that this government negotiates they will have to extend it three or four more times just to get to a meeting. I am not trying to be negative, but realistic about what the odds are of anything getting changed or adjusted in that short time line.

The major indexes bounced back on hope! It fell on speculation so why can’t if rally on speculation, after all that is what started this whole mess following the September 18th FOMC meeting. The pressure is still coming from an outside event, the budget and debt ceiling. Thus, news remains in control along with speculation. What happens in response to any decision is what we have to look at going forward. The upside is still on many analyst lips if there is s deal short term or long. Just look at today! Time will tell.

Let’s start with the DOW, moved up 300+ points on the day and bouncing back above the previous support at the 15,100 level and the uptrend line. How does it play out from here? Anyone’s guess at this point considering all the comments relative to a solution for the government. Hit the stops on the short trades and hit the entry points on the long side trades. Welcome to volatility… again.

The NASDAQ tested support near the 3650 mark and gapped back above the 50 DMA on Thursday. Is the selling done? Was it just enough to push the exit points and hit stops for investors? Scanning the large cap stocks there were some positive bounce backs, but still not venturing too far from safety at this point as we have no clarity only rumors. If the wrong thing is said overnight we can easily give back the gains forged today.

The S&P 500 index support at the 1645 mark and held. I stated last night that we had to remember that we are being driven lower by a outside event and that keeps me more guarded about the short trades. Now you can get a clearer picture as to why. Stops have to be tight following moves up or down on trading positions. The choppy trading creates bad exits when they gap through your stops and the missed opportunities. Watch as the index closed back at 1691 resistance?

Looking at our sector rotation chart below with the September 18th pivot point, the sectors all moved in unison and essentially to the same point. That does not validate any leadership, but it does show a joint effort to drive the markets higher in response to news. Utilities and Technology both added to the positive moves from earlier in the week (maybe taking on some leadership) and the balance all push to the upside by following the index higher. 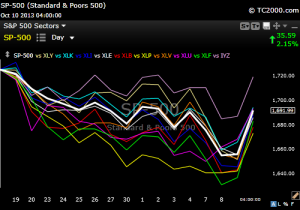 Chart of the Day: Volatility Index (VIX)
What a different a day makes with the index dropping from 21 to 16.3. The rumor of a thaw in the negotiations over the budget and the debt ceiling brought the buyers to the market. The down climbed more than 300 points on the day as investors were hopeful of some type of conclusion to the current mess in Washington. As you can see on the chart below this puts the index back below the August highs. As I stated in the update yesterday the trade setup on Wednesday was in SVXY, ProShares Short VIX Short-Term Futures ETF. It gained 3.5% on Wednesday and 9.5% today as the fear factor scaled lower. Depending on how tonight’s meeting ends with the President and the GOP leaders we may see more upside tomorrow in the ETF. I was willing to take some profit on half and see how it plays out from here. 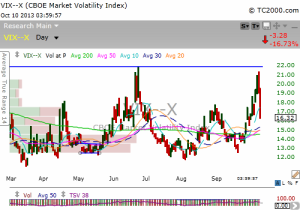 What to Watch Tomorrow:
Earnings are tops on my list with JP Morgan and Wells Fargo reporting earnings prior to the open. What to expect from them has become muddied by the shutdown, government lawsuits and the mortgage lending side of business. Refi business and loan origination is likely to be down 30% on the fees generated due to the hike in rates over the last six week. The bond business is being hurt as well and could be down as much as 80% at JP Morgan. WFC was down 9.5% and JPM was off 10.5% heading into trading today. Both bounced on the rally relative to proposed extension of the debt ceiling, but will that reverse with earnings? If you are a long term investor the banks are in good shape, if you are a trader not likely to be a sector you want to be long. Time frame determines your outlook, plain and simple.

Tomorrow investors will respond to what the President has to say following the 4:35 pm meeting with the GOP leaders and at this point it could go either way. Senator Reid stated he did not believe that Congress knew what it wanted and wan’t hopeful. However, he did state that if they (democrats) got what they wanted, they would happily negotiate anything. We will see soon enough, but you can smell the BS in the air!