The jobs report was the key heading on the day as we added 171,000 jobs for October the indexes opened higher, but faded to flat as the day progressed. The bigger issue is relative to the jobs data itself. Are the numbers improving? Have we seen a bottom near term for jobs? The analyst can’t agree and investors want it to be true for the sake of the economy.

As we conclude another half-week of trading the broad indexes are attempting to put in an upside move off support. The oversold conditions led to a solid move on Thursday and a weak day on Friday. Economic data was overall positive with spending on the rise again, personal income flat, home prices up, jobs looking up, ISM manufacturing better than expected, construction spending higher, payroll report higher and factory orders improving. One day at a time is all we can do for now. We all want the economy to improve, but it remains a slow and painful process.

Precious metals dump on Friday? Gold and silver were lower after attempting to push through key resistance points. The better jobs report gets the blame. If jobs are improving the Fed will withdraw from QE3 buying and in turn, that will be bad for gold. Thus, the selling in the metals.

Oil was back near support at $85. The dollar was stronger on the jobs report and that pushed oil lower. Amazing how this ever so slight of an improvement in the jobs report and the reaction across the board is different. If crude breaks this support level the next stop is $83.90. The short play in oil may be back and worth watching going forward.

Insurance stocks were under pressure following the storm and keeping financials in check overall. KIE fell more than 1% on Friday. XLF was flat while KBE (banks) were off 0.5 percent.

Energy was the biggest loser on Friday down 1.6 percent. The pressure from falling oil prices and gasoline sent the sector lower following a positive move higher on Thursday.

Bottom line is there was enough good news spread around to encourage investors to put money to work in stocks, but not enough to change the overall trend. The storm reports continue to show the level damage done by the storm. There is some optimism towards the upside of stocks, while the downside remains on the back burner. The optimism following a major event always steps to the forefront and gives hope… Stocks are no different this week. That said, protect against the downside and negative news events that can still take place.

The number one thing I am watching is the broad market indexes. Both the S&P 500 and NASDAQ indexes made attempts to bounce off the lows and gain some upside momentum on the week. The test of the move on Friday was a challenge, but not insurmountable. What is the directional outcome of all the chatter and movement… maybe next week will give some clues.

Volatility Index (VXX) moved higher and could break even higher depending on how the fear factor plays out relative to the markets overall. Tested support at the $33.50 mark and bounced back to the upside. $35 entry may work well for the trade opportunity.

Dominoes falling in the sectors. Healthcare (XLV) was the latest to break support. The move below $40.63 was a negative, but we have managed to hold some support thanks in part to the providers (IHF). Pharma (XPH) and biotech (IBB) have both been a drag on the overall sector. Watch the downside risk, but if the index can hold support at the $40 level we may reverse back to the upside short term. Telecom (IYZ), Restaurants (PEJ) and Banks (KBE) are the other struggling of late.

S&P 500 index (SPY) versus S&P 600 Small Cap Index. Is the appetite for risk coming back? Is the summer selling over? These are two indexes to watch for a shift in risk and momentum. IJR was looking good on Thursday, but the selling on Friday puts the index back near support of $75.50. Still potential upside next week if the bounce returns.

Fed speculation on the jobs report Friday was not reality. Gold, Silver and other metals sold off. The dollar rallied sending oil lower. All because we created 50,000 more jobs than the estimates? Not exactly… it is the trend that is expected to shift to the upside. That sent everything moving. Watch the reversal and opportunity in the insanity. The Fed isn’t going to the stop the cash madness any time soon.

WATCH LIST will be updated by Sunday Evening for next weeks trading!

Solid volume on the shortened trading week for the index and a bounce off the low at 1405. However the gain failed to hold and the index closed falt on the week. Up 1% on Thursday and down 1% on Friday. The directional issues remains a challenge for the broad market overall.

The Scatter Graph below has a starting point on 10/17 which is the current pivot point off the recent high. The move lower was in play, but we are watching the bounce attempt off the support. Industrials, Financials and Consumer were/are leading the attempt at the bounce. Technology put in a solid day on Thursday, but gave it up on Friday. These remain the sectors to watch short term. The need for leadership is in what we are looking for currently, but it has yet to materialize. The downside leadership all bounced as well on Thursday helping the broad index gain 1.1% on the day. However, you can see the impact of Friday on that move on the chart. Utilities were the only sector to log a loss on the on the week. 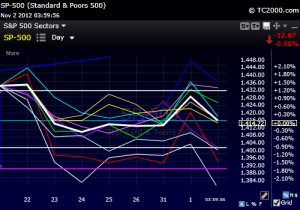 Financials – The index held support at $15.80 and the 50 day moving average. Earnings were ok for the quarter and the large banks should continue to benefit from QE3 stimulus. Currently the cloud is the government lawsuits for banks. Watch and be patient with the sector as we still like the upside play.

WATCH: XLF still in position in the S&P 500 model.

Technology – After selling lower we have been looking for the bounce play in the sector. We finally saw some money flow on Thursday with all four sub-sectors posting solid gains. Watch and protect the downside risk… this purely a trade position on the bounce. The selling on Friday wasn’t pretty for tech. Gave up the gains from Thursday.

Utilities – The sector continues to trade sideways with small bounces off support. This is  dividend plus upside play with a short term time horizon. The defensive posture of the sector remains in play as well.

Basic Materials, Industrials, Healthcare, Telecom, Consumer Services and SPY for the index itself. These have been posted to the Watch List on the S&P 5o0 model. The trade on the upside is what I am watching short term. These are trades to take a quick gain and then see how it plays from there.

NASDAQ Index – The index has been under pressure from the large cap technology stocks selling, and earnings within the sector didn’t help matters. They bounced Thursday pushing back above the 200 day moving average and resistance. Downtrend is still in play despite the bounce. Watch for follow through on the bounce or the short play to develop again.

Small Cap Index – Made a bounce off support on Wednesday to set up the entry on UWM (Russell 2000 Index). The downtrend is still in play, but this is a bounce trade as we discussed starting the trading week. Watch the near term resistance as exit point on the trade.

Dollar – The dollar, like stocks, is being pushed up and down based on the daily sentiment towards Europe and the global economic picture. The downside pressure on the dollar abated as fear has crept back into the global markets. Watch the bounce on the buck as it is at the top end fo the current trading range. Broke higher on the jobs report Friday.

The Chines Yuan (CYB) has been in a steady uptrend since September. This move has been similar to the move in Chinese stocks as well (GXC).

3) Fixed Income: The sector remains somewhat volatile as investors continue to look for direction from stocks. We have a small allocation to the sector overall, but continue to scan for the opportunity.

Treasury Bonds – Another attempt to make break above the downtrend line. Watch to see how this plays out short term with $120.80 support. $124 is back as a potential upside entry. Investors still can’t decide the direction. Fear and greed are at play on the chart.

Emerging Market Bonds – the reversal off the high has reached short term support at $121.25. A move below the 50 day moving average would be a negative to technically. Watch for the downside opportunity or a bounce off support as a trading opportunity.

WATCH: UGA – Watch and be patient on the reversal Friday.

6) Real Estate (REITS) – The sector tested the recent high and support at $64 (IYR). The sector broke support last week and bounced back this week. The downside is still the play to watch.

WATCH: IYR  – Attempting to break lower through support? Bounced back above $64? Watching