Welcome back VOLATILITY! Blame Italy, the Fed, Congress or anyone else for that matter, but in the end it comes down to the worries which have been discussed over and over again in media and on Wall Street. Eventually you knew the sellers would get control, and today they did.

What looked like a positive start to the week turned quickly on the news from the Italian elections. Once again this is an outside news event acting on the market. Those events cause volatility extremes which we did see in the Volatility Index today. It was tough to buy any positions at the open as we gapped higher by 0.6-0.8% on the indexes. Thus, as we state let it open and play out. The reversal on the rumored worries about the austerity programs coming under pressure in Italy sent the dollar higher, the euro lower and stocks sold off on the uncertainty.

That brought out more worries in the US relative to the budget cut deadline. Or now known as sequestration. As we stated in our weekend update, “the total cuts are not as dramatic as the media has made them out to be and they will not really impact the operation of government. In fact, one report noted the net spending for the fiscal year would still rise over $15 billion.  The real impact will be psychological and the markets will likely react to the act itself more than the economic impact of the event. Another outside market event that will add to the volatility on the week.” Those worries came with the European worries.

The VIX index jumped more than 30% on the trading day. That sent VXX up more than 13%. This is something we have been worried about and we have been managing a trade in VXX as well, which moved higher on the day.

There is plenty of homework to do as the week progresses. As usual… don’t make any assumption from today and prepare to do battle based on what the market gives going forward.

The focus is now shifting to the budget cuts of $85 billion if a deal is not made prior to Friday. If we are going to cut any spending in government then this may be the only hope. What is truly sad is we can’t cut $85 billion in spending from a budget that exceeds $3 trillion! Thus, we all look for this to be the economic event of the week.

Economy is steadily treading water with little to no growth. The short term outlook for the economy is positive, but just barely. Keep your focus and remain disciplined relative to your stops and exit points. Correction anyone? Famous last works from last week.

December 28th Pivot Point for uptrend following the Fiscal Cliff pullback test. The 1495 level was broken and now we have to rethink the short term trendline. The downside break is a big negative for the broad markets short term. 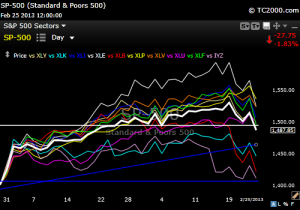 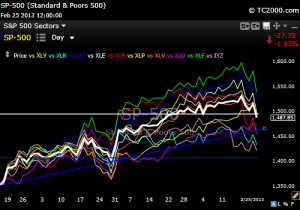 Technology – The parts are better than the whole. Dig in and find the leaders.

Financials – Bounced Friday after some selling hit our stop on XLF. Banks and brokers are the drivers short term. Watch both for the upside opportunities.

Treasury Bonds – The move in yields hit the exits for the short side play with TBT Friday. The upside play with TLT hit the entry point today. Watch and manage the volatility.

BAL – A trading range of $52.80-54.40 is in play. A break higher would be a continuation of the move off the November lows. Stalled and trading sideways. Watch and see it this can break higher. Tested lower again on Monday?

GLD – Downside reversal in play? Watch for confirmation and follow through to take a short term trade on the move.

EFA – Broke support at the $57.62 mark on Monday. The close below the 50 day moving average was another negative for the global ETF. EFU is the short ETF for the play.

FXI – China’s PBOC announced they would cut off money relative to the real estate market and repos. This is equivalent to what the Fed announced on Wednesday relative to quantitative easing. The impact was four days of selling. FXI, GXC, etc. all fell nearly 5% on the week. Watch to see how this downside move plays out. If the PBOC is serious the economic impact could be big for China’s market. Watch FXP hit entry today on the Sector Rotation Model.

The pullback test is in play for IYR and $67.25 is support. Selling resumed and hit our stop on Monday.