Where did the buyers go? This is not a good sign for the current direction of the broad indexes. An up and down, day to day volatility is leading to something as the buyers and the sellers fight it out. Today it was rambling about a strong consumer confidence number not being good for the markets. With the index hitting a five-year high, history shows the markets do worse after a big jump higher than a big move lower. Thus, it would indicate that the indicator more of a contrarian indicator for stocks. Glad we could clear up today’s activity with that study. (Consumer Confidence & Stock Returns)

Another reason for the decline today… Yes, the worry over the Fed withdrawing stimulus sooner rather than later was back. There was a bonus fear of slower global growth? Really, who makes this stuff up. Both fears have been on the table for awhile. The global growth concern is an overlap of the Fed worry. The global withdrawal of increased money supply is how it is now being postured and the concerns are further slowing in the global economies. It all makes sense, but it is nothing new, but maybe one step closer to reality.

Healthcare, Consumer Staples, Utilities and Consumer Discretionary were the leaders on the downside, with each giving up more than 1% on the day. Financials were the only sector to close positive on the day. There is plenty to worry about looking forward, but we have to be patient and let this all unfold versus attempting to force any positions short term.

Sit back, protect your downside and let the direction work itself out.

Major market indexes drop at the open, and close lower on the day. As stated above watch, listen and then act. I am not convinced the current activity isn’t building up to something bigger on the downside. No need to speculate, just let it play out one day at a time.

The April 18th chart below is the last low in the test off the April 11th high. You can see the selling impact at the end of the chart and who the biggest losers were. We have to be patient and let this play out going forward. Added line on the high for April 21st to track as the current high or pivot point if the downside continues as it has four of the last five trading days. 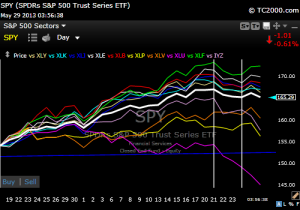 The current trend started on November 15th and has been tested by the the ‘fiscal cliff” issue bottoming on December 28th, The February 25th low pivot point was prompted by FOMC rumor of withdrawing stimulus, Cyprus on March 14th and the April test on economic worries.  The original target for the move was 1550-1575 which has been obtained. The uptrend remains in play, but the extended move has brought equal concern to the current highs as seen in Trading the last week. 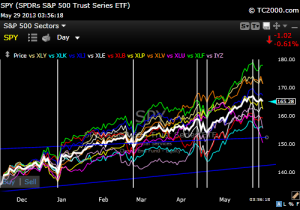 Technology (XLK) – The pullback from the move higher tested $31.40 as support and held for now. HPQ was up 17%  last week as held and continues to be one of the leaders in the sector. If support holds $31.45 looking for a trade on the upside. Otherwise the shorts will be looking for the opportunity.

Consumer Staples (XLP) – Moved to new high and tested support or breakout point for the trading range. Watch to see if holds or prompts more selling. $40.75 is the short term… as we saw today. The stop remains a break of support at the $40.75 level. Patience as this plays out.

Healthcare (XLV) – The sector broke from the consolidation or trading range to the upside. The test remains in play and a break below the support at $48.75 is the exit point for short term positions. Track to see how this plays out short term and mange your stops.

Energy (XLE) – Moved above the $80 level and has now tested the breakout level. All positive for now, but watching the downside risk in the current consolidation moves. Still in uptrend and still in play. Manage your risk and let this play out.

Telecom (IYZ) – Big test lower losing 2% on Wednesday. The seller took control on the renewed interest rate fears attacking this and other sectors. Hit stop and out of the positions.

Since the high on March 27th the dollar has essentially moved sideways to down. Starting April 23rd the dollar steadily declined until bouncing on May 1st. It has accelerated back to the previous high and higher. It is now testing those near term highs. The chart below shows the path of the dollar against the other currencies. 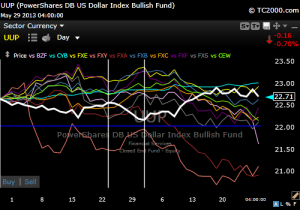 Treasury Bonds – Complete reversal on the yield has pushed the bond lower and broke below the previous low. Not a place to be other than short the bond. TBT. Hitting against March highs again. Watch and be patient as this plays out. Raise your stops on the TBT or TBF position.

Convertible Bonds – CWB = 3.6% yield. Price had been moving higher on the rally in stocks. Hit stops and on the sidelines for now.

I have moved the starting point forward on the chart. DBC has moved sideways since April 15th start point. PALL is moving higher and leading the metals. The balance of the sector is vertically challenged. CORN since May 21st has been trekking higher and one to watch. (CORN break above $41 positive.) Watch for $42.25 to hold on CORN. Be patient and let the winners define themselves before going into sector. 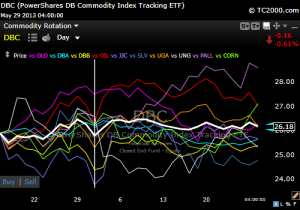 Global markets have shifted to the downside over global economic slowing. The Asian connection is hurting the overall index. The chart below shows the shift over the last week plus on the downside. We don’t own any positions in the global markets and for now I am still willing to sit on the sidelines. 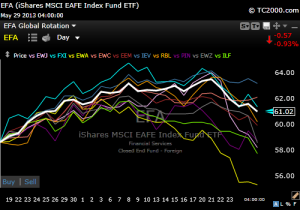